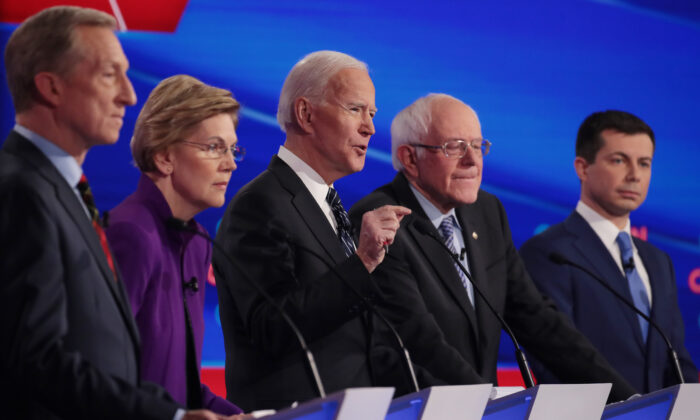 While the economy took a backseat during most of the Democratic presidential debate on Jan. 14, candidate Tom Steyer warned his fellow Democrats that this would be the key issue if they want to defeat President Donald Trump this November.

“Whoever is going to beat Mr. Trump is going to have to beat him on the economy,” Steyer said.

A self-made billionaire, Steyer presented himself as the only candidate with “the experience and the expertise to show that” Trump is “a fake there, and a fraud.”

While the moderators didn’t prompt the other five candidates on stage to address the issue, two more did so.

“I am ready to take on this president on the economy because I am from the exact kind of industrial Midwest community that he pretends to speak to and has proven to turn his back on,” said Pete Buttigieg, former mayor of South Bend, Indiana, highlighting his record of helping his town deal with the aftermath of the 2008 economic crisis.

The Midwest has added nearly 1.7 million jobs in the 12 months ending in November, according to the Bureau of Labor Statistics. It has also seen the highest wage growth among all regions at 3.9 percent year-over-year in the third quarter of 2019, according to the ADP Research Institute.

Former Vice President Joe Biden, who’s been leading the pack in the polls, went even further.

“I can hardly wait to have a debate with him. Where I come from, the neighbors I come from, they’re in real trouble,” he said. “Working class people and middle class people. The middle class does well, working class has a way up and the wealthy do well. But what’s happening now? They’re being clobbered. They’re being killed. They now have a situation where vast majority believes their children will never reach the stage they’ve reached of economic security. I’d love that debate because the American public is getting clobbered. They wealthy are the only ones doing well, period.”

More than 1.2 million American households climbed to the middle class, meaning above $50,000 in annual income, from 2016 to 2018, according to Census Bureau data.

The unemployment rate has stayed at or below 4 percent for the past 21 months, standing at 3.5 percent in December, which hasn’t happened since the 1960s. Moreover, black and Hispanic Americans have enjoyed their lowest unemployment rates on record.

Meanwhile, wage growth has been fastest in low-wage industries and among those at the lowest education level.

More than 6 million weaned themselves off food stamps under Trump.

Trump has benefited from entering office during a period of economic expansion, but the expansion is now the longest on record and far beyond what many economists expected. The economy has been boosted by Trump’s cutting of taxes and regulations.

Trump has promised more deregulation and further middle class tax cuts if given a chance to push the plan through Congress.

Democratic candidates, on the other hand, have proposed at least partially undoing the tax cuts. They have also proposed more taxes. In particular, the progressive candidates, Sen. Bernie Sanders (I-Vt.) and Sen. Elizabeth Warren (D-Mass.), have proposed significant tax hikes.

While Sanders acknowledged that his plan for government takeover of healthcare would require hiking taxes on the middle class, Warren claims to offer the same with only taxes on the rich and corporations. Her proposals, however, have drawn skepticism, especially on whether her signature plan to tax not only income, but also assets of those with a net worth over $50 million would be constitutional and whether it would in fact extract as much money as she anticipates.

The candidates have criticized Trump on his imposing tariffs on China, which, it appears, have affected American manufacturing.

Trump is using the tariffs to pressure China into a trade deal that would address the stifling of American companies’ access to Chinese markets, forced technology transfers, dumping, theft of U.S. intellectual property, and currency manipulation.

The tariff talking point may lose its teeth for the Democrats since Washington and Beijing have already reached a partial trade deal and continue to negotiate the rest of the outstanding issues.

China committed in the “Phase One” deal to buy $80 billion to $100 billion in U.S. agricultural products over two years, which more than doubles its previous purchases.