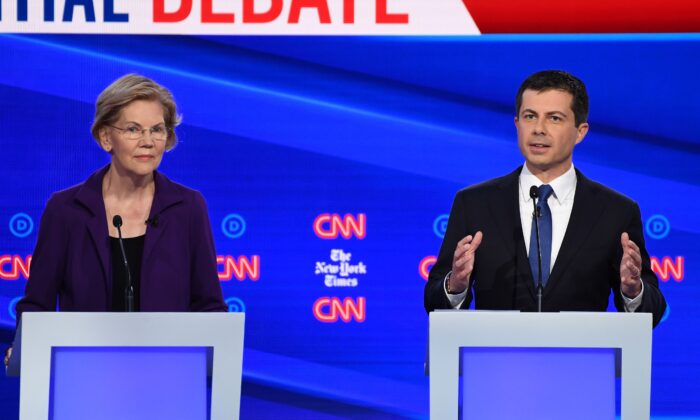 Democrats Pile on Warren Over Healthcare Costs During Debate

Warren has refused to say that taxes would go up for the middle class under Medicare for All. She has endorsed a bill written by Sen. Bernie Sanders (I-Vt.), who has said multiple times his plan would require higher taxes.

Asked by a moderator on Tuesday, Warren declined to say taxes would go up; she reiterated that overall costs would go down.

“I will not sign a bill into law that does not lower costs for middle-class families,” she said.

South Bend Mayor Pete Buttigieg hit back when asked about his prior criticism of Warren as “evasive”: “Well, we heard it tonight. A yes or no question that didn’t get a yes or no answer. This is why people here in the Midwest are so frustrated with Washington in general and Capitol Hill in particular,” he said. “Your signature, senator, is to have a plan for everything, except this.”

“No plan has been laid out to explain how a multi-trillion-dollar hole in this Medicare for All plan that Sen. Warren is putting forward is supposed to get filled in,” he said.

Buttigieg plugged his plan, which he calls Medicare for All who want it.

“We take a version of Medicare, we let you access it if you want to, and if you prefer to stay on your private plan, you can do that too,” he said.

“I don’t think the American people are wrong when they say what they want is a choice. … It’s affordable for everyone because we make sure the subsidies are in place. It’s just better.”

Sanders then said that his bill would remove premiums, co-payments, deductibles, and all out-of-pocket expenses.

“At the end of the day, the overwhelming majority of people will save money on their healthcare bills. But I do think it is appropriate to acknowledge that taxes will go up,” he said.

He said taxes would be higher for people. Still, the overall costs for many people would be lower than what they are paying now for premiums and other healthcare costs.

Warren was asked again to acknowledge Sanders’ admission, but she declined again.

Sen. Amy Klobuchar (D-Minn.) also called out Warren, alleging the senator hasn’t been honest about the costs of the healthcare program and the way 149 million people would be kicked off of their healthcare plans under Medicare for All.

Warren responded by saying that most people go broke because of healthcare costs. “The problem we’ve got right now is the overall cost of healthcare. You can try to spin this any way you want. … I put out nearly 50 plans on how we can fight back and how we can rebuild an America that works.

“The difference between a plan and a pipe dream is something we can actually get done,” Klobuchar said.