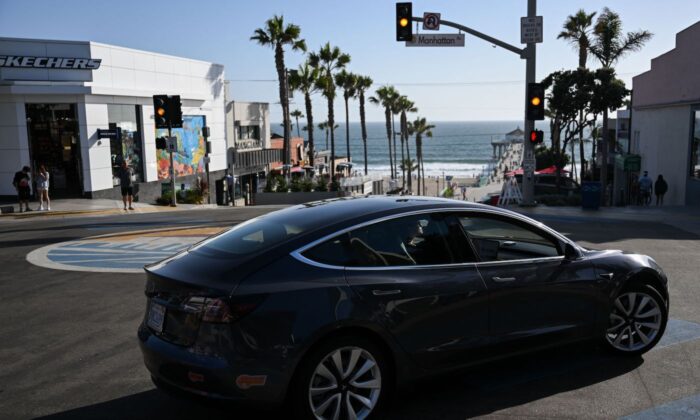 The federal government’s electric vehicle (EV) transition is in full swing, and Democrats have hyped the recent passage of the Inflation Reduction Act (IRA) as an accelerant to that evolution.

Further, gas prices’ continual pounding of consumers at the pump has spurred EV interest to rise to 36 percent, according to a 2022 Consumer Reports survey. That may not sound like much, but it’s a significant increase from the 2020 report, when EV interest was at 4 percent.

Still, one of the hurdles to increased EV adoption is price. On July 12, Kelley Blue Book reported that the average cost of an EV was more than $66,000, while the price for an average gas-powered vehicle was $43,942—a $22,000 difference.

To help allay concerns about price toward increasing adoption, Democrats proposed an expansion of EV tax credits in the IRA; the credits took effect on Aug. 16. However, since the IRA was enacted, some experts are pointing out that the new credits exclude lower-priced EVs and could phase out entirely in 2023.

Indeed, economically priced EVs from Toyota and Hyundai are now ineligible for EV tax credits, while Audi’s Q5 PHEV (plug-in hybrid EV) and BMW’s 330e qualify for up to $7,500—for now.

Why? Democrats tied the EV credits to an “assembled in North America” requirement, and, in 2023, that includes the battery.

Before the IRA went into effect, there were approximately 72 EVs eligible for a tax credit, according to the Alliance for Automotive Innovation industry trade group.

Now, just 16 model year 2022 personal vehicles qualify for the federal tax credit, and only three 2023 models are eligible, according to the Department of Energy. If you’re looking for a commercial vehicle, two 2022 vehicles qualify.

The average manufacturer’s suggested retail price is $54,897 for the 2022 qualifying base models. That price doesn’t include taxes, fees, or other extra charges, trade-ins, or discounts.

However, starting in January 2023, zero EVs or PHEVs are eligible for the tax credits, Alliance for Automotive Innovation reports.

“The $7,500 credit might exist on paper, but no vehicles will qualify for this purchase incentive over the next few years. That’s going to be a major setback to our collective target of 40-50 percent electric vehicle sales by 2030.”

In the IRA, Senate Democrats added a $4,000 consumer tax credit for lower- and middle-income individuals to buy used “clean vehicles” and up to $7,500 tax credit to purchase new “clean vehicles.” The new vehicle credit caps at $150,000 for a single person and $300,000 for a married couple.

While the IRA’s $7,500 tax credit might sound great if you’re planning to purchase an EV, the law’s North America assembly stipulation means that most previously qualifying EVs are now ineligible.

Additional provisions go into effect on Jan. 1, 2023. They include the requirement that EV battery components contain a certain percentage of minerals from North America or a country with a free trade agreement with the United States.

Plus, most of the battery must be manufactured or assembled in North America.

“That’s going to be a huge burden and hurdle to overcome. We don’t have the mining, we don’t have the critical minerals that are needed in North America or from our free trade partners, and almost 90 percent of the refining is done in China,” Carla Bailo, CEO of the Center for Automotive Research, told NPR.

On Feb. 22, the Biden administration conceded that the United States increasingly depends on China to refine “cobalt, lithium, rare earth, and other critical minerals” for EV batteries. China controls about three-quarters of the market.

Biden has said that reliance constitutes a “national and economic security” threat. To combat it, he released a statement saying that the United States would expand domestic production and transition away from its reliance on China.

Additionally, on July 28, 2021, Biden released a Notice of Proposed Rulemaking (NPRM), which directed a change to the “Buy American” statute.

“The Buy American statute says products bought with taxpayer dollars must ‘substantially all’ be made in the U.S. However, today, products could qualify if just 55 percent … of the value of their component parts was manufactured here. The NPRM proposes an immediate increase of the threshold to 60 percent and a phased increase to 75 percent.”

The above EV tax credit requirements in the IRA are part of Biden’s domestic manufacturing push.

Indeed, Biden stated that the IRA will “Support American workers with targeted tax incentives aimed at manufacturing U.S.-sourced products such as batteries, solar, and offshore wind components, and technologies for carbon capture systems.”

Still, John Bozzella, president and CEO of the Alliance for Automotive Innovation, stated, “We share the goal of increased domestic capacity and supply, but the requirements ought to be an inducement to industrial base change—not unattainable and punitive to consumers.

“A more gradual phase in of the battery component, critical mineral and final assembly requirements—that better reflect current geopolitical, sourcing and mineral extraction realities—will preserve the credit for millions of Americans and keep the country focused on building domestic supply chains able to support our electrified transportation future,” he added.

If Democrats and the Biden administration insist on maintaining the EV tax credit requirements, it could severely affect the 2030 goal of 40 to 50 percent electric vehicle sales, he said.

Bozzella’s point is weighty when considering the Consumer Reports survey, which found that half of the respondents said they were unaware of federal and state tax incentives. Consumer Reports noted that awareness of this benefit “might sway someone to make an EV purchase.”