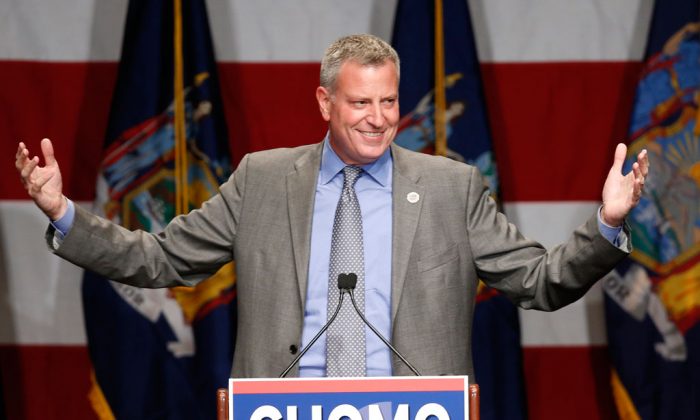 NEW YORK—Mayor Bill de Blasio on Wednesday urged his fellow Democrats to articulate a clear progressive message and reject the “safe” campaign themes that he said doomed them in this month’s midterm elections.

De Blasio also reiterated that he hopes to host the Democrats’ 2016 national convention and said he has secured $10 million toward his $100 million convention goal.

The remarks, livestreamed from Washington, D.C., echoed a column de Blasio wrote in the Huffington Post last week and suggested that the mayor, who rode a liberal campaign to a lopsided victory last year, is seeking to position himself as a progressive voice on the national stage.

De Blasio said a forthright liberal campaign serves Democratic candidates better than the moderate approach that many of them employed this year. “The moderate approach has been proven to fail so consistently, why would you not try a bolder approach?” he asked.

De Blasio, who was Hillary Rodham Clinton’s 2000 Senate campaign manager, declined to say whether Clinton should run for president and said he has not discussed his campaign ideas with her.

Asked which Republican would be the most formidable foe, de Blasio said Sen. Rand Paul of Kentucky “evinces a certain authenticity that any good Democrat should worry about.”

“To the extent that there is a Libertarian philosophy that he sticks to regardless of political convenience, I think that makes him a stronger candidate,” de Blasio said.

New York City officials are bidding to hold the 2016 Democratic convention at Barclays Center in Brooklyn. The other contenders are Philadelphia; Phoenix; Columbus, Ohio; and Birmingham, Alabama.

De Blasio said in a news release that New York will be ready “to hit the ground running the moment we’re named host of the 2016 convention.”