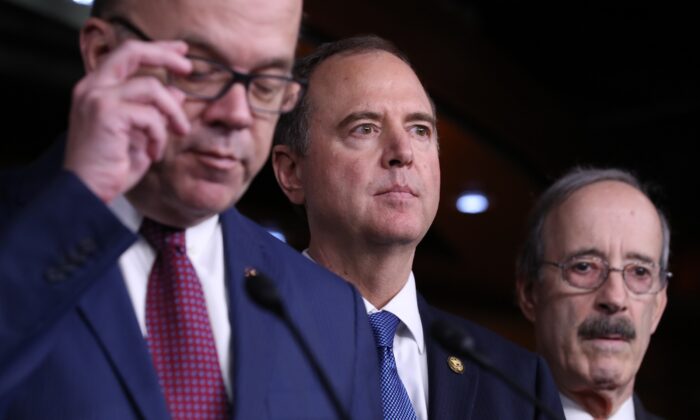 House Intelligence Committee Chairman Rep. Adam Schiff (D-Calif.), center, attends a press conference after the close of a vote by the U.S. House of Representatives on a resolution formalizing the impeachment inquiry centered on President Donald Trump in Washington on Oct. 31, 2019. (Chip Somodevilla/Getty Images)
Politics

“This is a solemn day in the history of our country,” Schiff said.

Schiff said that the founding fathers inserted impeachment into the Constitution for leaders who take office and abuse the office.

“We take no joy in having to move down this road and proceed with this impeachment inquiry, but neither do we shrink from it,” he said.

“During the depositions that we’ve conducted thus far we’ve used a format we believe is very conducive to the fact-finding process,” and that process will continue in the open hearings, Schiff said, noting staff counsel will be permitted to do sustained questioning of up to 45 minutes for each side, as has been the case.

Schiff said he will begin releasing transcripts of the depositions.

“We recognize the seriousness of this undertaking. We recognize that we have been compelled by the circumstances to move forward,” Schiff said.

“I’m proud of the resolution we put together. I believe it will stand the test of time,” House Rules Committee Chairman Jim McGovern (D-Mass.) said. The committee did not add any of the 17 amendments Republicans proposed on Wednesday.

“I truly believe that 100 years from now historians will look back and judge us on the decisions we’re making today,” McGovern said.

Schiff and McGovern left without taking questions, while four of their colleagues answered a number of queries from reporters.

“If after a fair and thorough inquiry, the allegations against President Trump were to be true, they would represent a profound offense,” House Judiciary Chairman Jerrold Nadler (D-N.Y.) said.

“This resolution that we passed today lays the groundwork for open hearings in the House Intelligence Committee and the House Judiciary Committee,” he added. It’s “necessary to ensure that our constitutional order remains intact for future generations.”

“No one can be above the law, and we must enforce that,” Nadler said.

House Foreign Affairs Chairman Eliot Engel (D-N.Y.) claimed they had found evidence the president had abused power “to advance his political fortunes. It’s what the framers feared the most.”