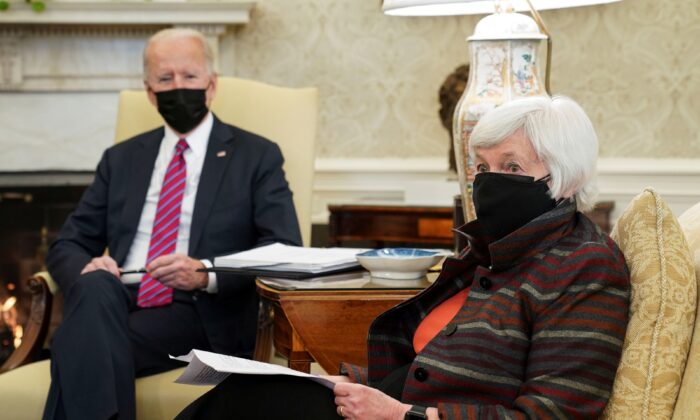 Congressional leadership has cut a controversial program from their new budget bill that would have allowed the IRS to gain unprecedented information from Americans’ bank accounts after the measure drew bipartisan criticism.

The program would have expanded the IRS’s ability to look into the details of Americans’ bank transactions. Originally, the IRS would have been able to gain information on all accounts with inflows and outflows of more than $600 per year.

Republicans and banks strongly criticized the program, referencing reported concerns by their constituents and customers over the plan and condemning the new regulatory burdens that the program would place on the private sector.

Democrats, however, were largely supportive of the plan.

Speaker of the House Nancy Pelosi (D-Calif.), when asked what she would say to those concerned by the program, expressed doubted whether such concerns existed. “With all due respect, the plural of anecdote is not data,” she snapped.

She applauded the proposal, saying “If people are breaking the law and not paying their taxes, one way to track them is through the banking measure,” she explained.

Rep. Richard Neal (D-Mass.), chairman of the House Ways and Means Committee, praised the $80 billion investment in the IRS and the agency’s ability to access small bank transactions, saying Democrats want to ensure tax fairness and to make sure the wealthy do not dodge their tax obligation under the new tax plan.

Another proponent of the plan has been the Biden-appointed former Chairwoman of the Federal Reserve, Treasury Secretary Janet Yellen.

During a Sept. 30 House oversight hearing, Rep. David Kustoff (R-Tenn.) questioned Yellen over the plan, citing concerns that the program would constitute an invasion of privacy.

Yellen defended the measure, saying “I don’t believe it’s an invasion of privacy and look, the IRS gets a great deal of information that it needs in order to make sure the taxpayers comply with the tax code.”

Republicans quickly pushed back against Yellen’s efforts to defend the proposal.

Sen. Cynthia Lummis (R-Wyo.) said: “No amount of explaining will change the fact that this $600 reporting threshold is completely unacceptable, a massive government overreach, and gives the IRS data they can’t manage properly.”

“Secretary Yellen is essentially implying the American people are regularly committing tax fraud,” she said. “This rule would facilitate unwarranted snooping by the IRS.”

McCarthy said, “This surveillance program crosses a line, it’s un-American.” He promised that “Republicans will do everything possible to stop it before it ever gets off the ground.”

After this strong, unavoidable criticism, proponents of the plan gave an inch, raising the reporting threshold from $600 of activity per year to $10,000 per year.

“Today’s new proposal reflects the administration’s strong belief that we should zero in on those at the top of the income scale who don’t pay the taxes they owe,” Yellen said.

But even this new proposal was not exempt from scrutiny by moderate Sen. Joe Manchin (D-W. Va.), whose support is necessary for the larger reconciliation budget package to pass.

Speaking at a Tuesday meeting of the Economic Club in Washington, Manchin vehemently opposed the program.

Manchin agreed that the IRS should be somewhat strengthened. Under the reconciliation bill, insisted Manchin, “The IRS is going to be able to do the job that they’re supposed to be doing.”

But Manchin ruled that his party’s snooping scheme did not fall into the category of what the IRS should be doing. “[The IRS was] never able to go into bank accounts,” he noted.

Manchin related a conversation he’d had with President Joe Biden about the program: “I said ‘Mr. President, I don’t know who put this out or how it got screwed up but they said basically, ‘We’re gonna start looking at $600 transactions.’ Even if it’s $10,000, okay, that’s only $800 or $900 [of activity per month].”

Manchin said that he asked the president, “Do you understand how messed up that is? To think that Uncle Sam’s gonna be watching transactions?”

“I said ‘I don’t know how this happened, but this cannot happen. This is screwed up.’”

Manchin indicated that Biden agreed, quoting the president as saying “I think Joe’s right on that.”

Any lingering hope for the program was undercut when 21 House Democrats asked on Tuesday that the measure be removed entirely.

This opposition apparently put the final nail in the coffin for the proposal, which has now been cut from the final bill, a substantial victory for the program’s critics. Instead, Democrats have opted to use new revenue-raising measures, including a new “billionaire tax.”

But the IRS snooping measure, it seems, will not make it to the president’s desk.