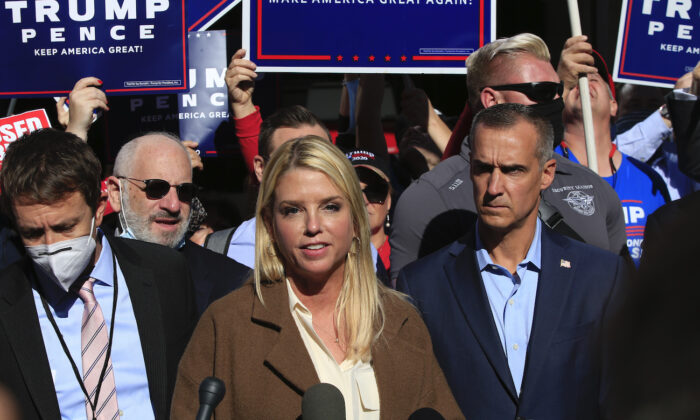 At 8:38 p.m. on Monday, Marks wrote that “county boards of elections should provide information to party and candidate representatives during the pre-canvass that identifies the voters whose ballots have been rejected” so they could be given another ballot.

The lawsuit argues the order by Marks is contrary to the state’s election code, which reads “no person observing, attending, or participating in a pre-canvass meeting may disclose the results of any portion of any pre-canvass meeting prior to the close of polls.”

Republicans also cite a Pennsylvania Supreme Court ruling that states, “unlike in-person voters, mail-in or absentee voters are not provided any opportunity to cure perceived defects (to their ballot) in a timely manner.”

The Republicans argue that Secretary of State Kathy Boockvar and Marks were breaking this rule to benefit Democrats. Boockvar did not respond to The Epoch Times’ request for comment on this issue.

Thomas Breth, the lawyer who filed the suit for the Trump campaign, wrote that some county election boards in Pennsylvania provided voters’ names and contact information, along with explanations of their ballot defects, to party operatives.

Breth wrote, “It is inappropriate for individual counties to unilaterally create their own standards, their own procedures, for letting individuals come in and cure (ballots).”

“They constantly are changing the rules,” he said, the National Review reported. “They have been applying different standards, issuing guidance as they go, changing the rules as they go, and making it difficult for us to be able to establish that there is one clear, uniform standard of how to do this throughout the whole commonwealth. That’s what we want.”

Pennsylvania officials have urged county election directors to keep late-arriving ballots segregated, but Republicans have said the instructions have been confusing.

Tabas worries that those late-arriving ballots will be mixed with ones received on time and will create problems if the Pennsylvania Supreme Court rules in Trump’s favor to only have the first batch counted.

“There was no clear indication as to how, during that processing, they could remain segregated so we could identify later which ones came in late and are included in the total or not,” Tabas the National Review.

Trump was ahead by about half a million votes Wednesday, but Biden closed the gap as more absentee ballots were counted.

In addition to the lawsuit over alleged violations of the state’s election code, and the one over ballot counting, the Trump campaign has also taken legal action against Pennsylvania because its observers have not been given meaningful access to monitor the ballot counting process.