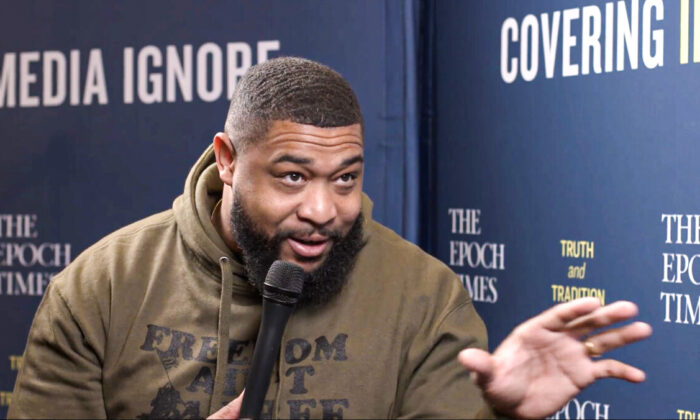 Brandon Tatum in an interview with The Epoch Times at a TurningPointUSA event in Phoenix, Ariz., in December 2021. (The Epoch Times)
2022 Midterm Elections

Democrats Have No Message for 2022: Brandon Tatum

The Democrats have no message for 2022 and will “feel the heat” in the midterm elections, says Brandon Tatum, a popular public speaker and personality.

During his campaign trail, President Joe Biden criticized then-President Donald Trump for his pandemic response and pledged to combat COVID-19 more effectively. But almost a year after Biden took office, Americans still haven’t returned to a normal life, and the death toll from the CCP (Chinese Communist Party) virus in 2021 has surpassed that of 2020. The Biden administration has been pushing for vaccine mandates, urging people to get boosters, even though the mandates have been challenged in courts.

“Because people are having real-world experiences with the virus … and they can decide for themselves if they want to take calculated risks,” Tatum added, signaling his disapproval of the government infringing upon personal medical decisions. “And so I think that they’re going to feel the heat, come 2022 midterm elections. And in 2024, I think it’s going to be a landslide.”

Tatum said the number of Republican voters would increase substantially, because the Democrats have been out of touch with ordinary people.

“I don’t think it’s because of the Republicans. I think it’s because of the Democrats,” Tatum continued. “They are so much engulfed in lunacy that the average person is looking at them like, what are you guys even talking about? The crime rate is out of control, and you’re still arguing about the police? We got real issues, inflation is out of control; we’re trying to provide for our families, and you’re arguing over Trump? He’s not even a president anymore,” said Tatum.

“I think they’re losing touch with the populace, and we’re going to see a backlash.”

In June, Tatum told The Epoch Times that “Defund the police” has a broader agenda, and it’s not to stop the killing of black people.

Tatum explained that the agenda is to dismantle local police departments. If law enforcement is federalized, the federal government will be able to more easily enforce unconstitutional mandates or restrictions, such as those involving vaccines or guns.

Last month, Tatum’s new book “Beaten Black and Blue: Being a Black Cop in an America Under Siege,” was published. In the book, he shared how Black cops—or any cops—maintain the motivation and commitment to do their job in an era of civil unrest and political divide.

“So it’s clear as the noonday sun when you treat them poorly, they’re going to perform poorly, and you’re not going to get the outcome that you want in the community.”