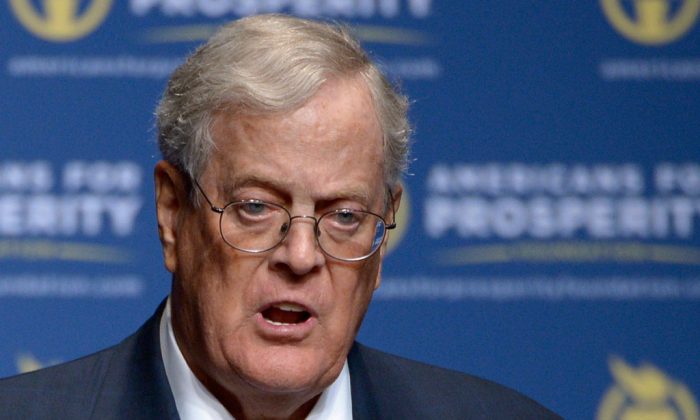 Americans for Prosperity Foundation Chairman David Koch speaks in Orlando, Fla., on Aug. 30, 2013. For as often as Democrats attack the conservative billionaires Charles and David Koch for their heavy spending on politics, it's actually the liberal-minded who shelled out the most cash on the just completed midterm elections. (AP Photo/Phelan M. Ebenhack)
Politics

Democrats Get a Lot More Funding Than Republicans

WASHINGTON—For as often as Democrats attack the conservative billionaires Charles and David Koch for their heavy spending on politics, it’s actually the liberal-minded who shelled out the most cash on the just completed midterm elections.

At least, that is, among those groups that must disclose what they raise and spend.

Among the top 100 individual donors to political groups, more than half gave primarily to Democrats or their allies. Among groups that funneled more than $100,000 to allies, the top of the list tilted overwhelmingly toward Democrats — a group favoring the GOP doesn’t appear on the list until No. 14.

In all, the top 10 individual donors to outside groups injected almost $128 million into this year’s elections. Democratic-leaning groups collected $91 million of it.

Among the 183 groups that wrote checks of $100,000 or more to another group, Democrats had a 3-to-1 cash advantage. The biggest player was the National Education Association, at $22 million. Not a single Republican-leaning group cracked the top 10 list of those transferring money to others.

Overall, for the campaign season that just ended, donors who gave more than $1 million sent roughly 60 cents of every dollar to liberal groups. Among the 10 biggest donors, Democrats outspent Republicans by an almost 3-to-1 margin.

“They’re total hypocrites when it comes to this subject,” said Republican National Committee Chairman Reince Priebus. “They’ve made a living off campaign talking points when, in reality, they’ve been raking in more money from millionaire donors than Republicans for quite a while.”

That’s true, but only among those groups that have to tell the Federal Election Commission about all the money that’s coming and going.

Left undisclosed are the specifics of the fundraising and spending of politically minded non-profit groups, such as the Koch-backed conservative network of Americans for Prosperity or the environment-minded League of Conservation Voters.

Because they are not technically political, they do not face the same disclosure rules as overtly political groups. That leaves a gaping hole in the effort to follow all the money in politics, especially among Republican patrons who tend to favor those organizations that do not have to disclose how they raise or spend donations.

“I tip my hat to them. It’s definitely all legal,” said Eddie Vale, an adviser to American Bridge 21st Century, a liberal research group that tracks Republicans.

American Bridge, like Americans for Prosperity, does not disclose its donors.

“We’re not going to unilaterally disarm,” said Vale, a Democratic strategist who said he would prefer all organizations disclose their donors.

These figures are based on an Associated Press analysis of data compiled by the non-partisan Center for Responsive Politics from reports filed with the Federal Election Commission through Nov. 16 and with the Internal Revenue Service through Aug. 4. The data covers super PACs, earmarked donations to non-profit groups and money sent to party-aligned independent expenditure committees.

It does not include money given directly to candidates for office or the official party-backed campaign committees that support them. And it notably omits most of the Koch-backed network of political groups.

Charles and Elizabeth Koch reported just $2 million in giving to groups that must disclose their fundraising. David and Julia Koch reported the same through mid-November. The puts the wealthy industrialists as tied for the 23rd spot on the list of biggest spenders.

Charles and Elizabeth ended up giving another $3 million after the reporting period, advisers said.

That’s not to say the Kochs didn’t spend to shape the elections. They just did it in a way that helped hide their financial footprint.

The Kochs’ biggest machine, Americans for Prosperity, employed 550 staffers and spent more than $125 million on these elections, advisers said. It is impossible to know how large of a share of that bill the Kochs themselves footed, but they’re hardly alone in trying to advance conservatives beliefs.

When the Koch-backed network in July started a super PAC, it quickly lined up donors and raised $28 million for explicitly political activities in less than six months.