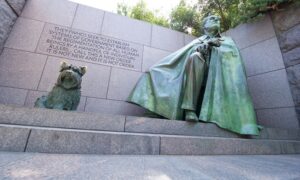 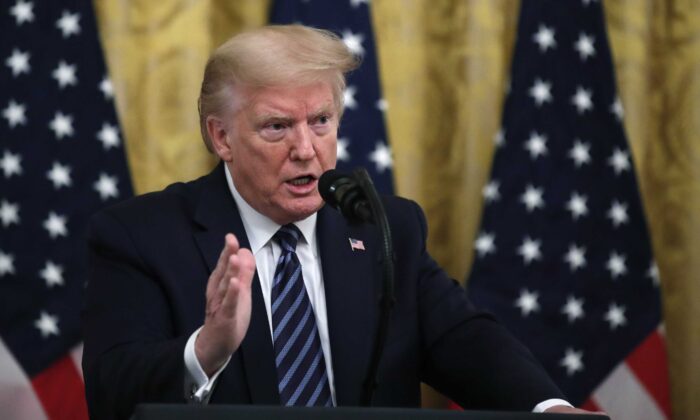 President Donald Trump answers questions from reporters in the East Room of the White House in Washington on April 30, 2020. (Alex Brandon/AP Photo)
Viewpoints

Democrats Gamble Everything on Dislike of Trump and Promotion of Lockdown

The Democrats are staking everything on their ability to turn the presidential election into the question: “Do you like Trump?” Their gamble, (and only play at this point) is that an adequate majority will reply negatively, and the Democratic nominee as the only alternative, will win.

Like film versions of World War II Allied bomber pilots returning to England from raids over Germany with flack-riddled airplanes, wings wobbling, engines sputtering, and landing gear not responding, they are gamely repeating to each other “Hang on, Carruthers, this could get a little rough.” In pursuit of this strategy, they have an excellent excuse for keeping their unfeasible candidate in his basement for medical reasons, and are espousing in unison the imbecilic mantra: “Test and trace.”

This holds that the way to fight the coronavirus is to mass-test the population and wherever an infection is discovered, to ascertain the identity of everyone the infected person has met in the last two weeks and chase them up and test them, and so forth, to the farthest corners of America. This is nonsense and anyone who thinks about it for five seconds will realize it’s nonsense, but it is the almost uniform position of the national Democratic leadership.

A virus can be dormant for a considerable time and come to life; this malady can never be eliminated until it is possible to vaccinate the whole population. Some of the governors, like Gretchen Whitmer of Michigan, will take the bullet for the team, even when the lobby of the state capitol is filled, as it was last week, with hostile demonstrators (many of them carrying sophisticated rifles in the highest Minuteman tradition).

The entire election play-book of the Democrats, as far as can now be deduced, consists in flatly stating that Trump is corrupt and incompetent, with no or minimal elaboration, and in advocating an indefinite lock-down, while the ‘test and trace’ charade is conducted.

The issue must be yes or no on Trump, with minimal mention of the alternative candidate, and the basis of the thumbs up or down is an interpretation of the coronavirus that is effectively the question: have you enjoyed the coronavirus, are you pleased that more testing wasn’t done earlier to shorten the lockdown, and do you agree with Trump that the country should be reopened no matter how many people die as a result?

The innumerable sharp-shooters of Democratic political comment have already begun the fusillade. David Axelrod, Democrats’ best tactician since Bill Clinton, has attacked Trump for failing to lead the world in the coronavirus emergency. Implicit in this line of attack is the insinuation that complaints about China are just buck-passing and that suspending payments to the World Health Organization will cause stupefying numbers of needless deaths in under-developed countries.

Last week Howell Raines, who was fired as executive editor of the New York Times seventeen years ago for mollycoddling a plagiarist and bullying most of the huge editorial staff, in a volcanic fulmination on the Vesuvius of Trump-hating television, MSNBC, said Trump was guilty of “a failure of presidential leadership so epic, so sweeping, that historians and political professionals will be studying it for decades.” He was particularly aroused by Trump’s son-in-law, Jared Kushner, who, Raines said, was running the official federal response to the coronavirus pandemic, (news to all other observers).

On April 28, Michael Bloomberg wrote for his own news service that this president is “uniquely unfit,” with a “characteristic blend of incompetence and dishonesty.” He didn’t elaborate much either, except for a reference to Trump’s “misguided and counter-productive trade policies.”

As strategies go, it’s crude and even rather contemptible, but it is attached to a premise that may be valid: all the rest of this president’s record, including his formerly brilliant record on the economy and his drastic reduction of illegal immigration and recognition of the need to meet the China challenge, may be swamped in a referendum on his handling of the coronavirus pandemic—that question may be the real version of the question to the voters of whether they approve of Trump.

If this happens, as now appears likely, it will not only obscure the rest of Trump’s record in these last, eventful three years, it is clearly the fervent hope of the Democrats that this over-arching question will expunge from the voters’ thoughts the problem of the allegation of sexual impropriety against Joe Biden, and the growing apprehension of political damage over the obviously lawless conduct of the Barack Obama FBI and intelligence leadership in the 2016 election and aftermath.

It is difficult and hazardous to try to gauge the impact of the Tara Reade affair, and the New York Times’ initial gambit of proposing the Democratic National Committee investigate it was almost universally regarded as laughable, even by Democrats.

It is even more difficult to assess the potential impact of whatever the special counsel, John Durham, may do about the Comey-Brennan-Clapper shenanigans (directors of the FBI, CIA, NIA), and how far any charges may ramify. But none of it will do Biden any good, and if he can wrap the whole election in a single question of handling of the pandemic, he would be unwise to pass on that opportunity.

It is also difficult to predict how that football may bounce. A number of basic facts have been adduced; one is that the lock-down retarded the development of the virus, but has not met optimal expectations of its reduction.

The scientists are being challenged by respectable counter-opinion that the shut-down is both ineffective beyond a certain point and economically unsustainable. The country cannot go on pouring trillions of taxpayers’ borrowed dollars on this, and the next round is clearly going to be a real show-down as the administration and the Republican Senate majority are likely to require a payroll tax cut and the end of sanctuary cities as the price for another round of shut-down subsidies.

It has also emerged from the data that the coronavirus is a serious risk to the twenty percent of the population over 65, and a minimal risk to the other 80 percent, so it is obvious on its face that shutting down the country entirely any longer is a mistake.

For the elderly twenty percent who have suffered 80 percent of the fatalities, that means that 55,000 of the 65 million people over 65, or one for every 1150 people in that age group, less than one tenth of one percent, have died; and of the other eighty percent, about 14,000 out of 260 million have died, or one in every 18,500 people, barely one two-hundredth of one percent of the great majority of Americans.

It is obvious from every standpoint that the shut-down cannot continue. Trump has wisely left it to the governors and municipalities to decide and the forces of contemporary economic and social history will force the country back open. This is an astute delegation of this decision to the people and the states, in keeping with the unallocated powers clause of the Constitution (the Tenth Amendment).

The Democrats are on a slippery slope calling for an indefinite shutdown in pursuit of an unattainable goal, and it is too late for them to join the ranks of those who claim no shut-down should have happened, as in Sweden. The Democrats can’t pull that switch. They are stuck with a cul de sac policy, and a candidate who is not presentable, while a former staff member shouts of sexual abuse to the party of “Believe women!,” and the country awaits the Russia fraud indictments. Six months out, Trump still has the upper hand.