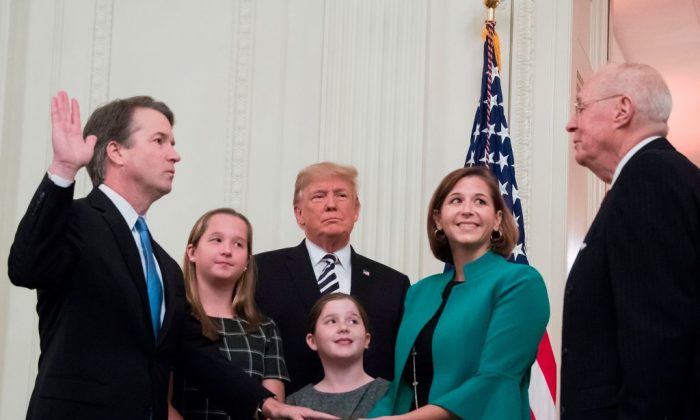 On the day of the Senate vote to confirm Judge Brett Kavanaugh’s nomination to the U.S. Supreme Court, Charlie Savage, writing for The New York Times, discussed liberal strategies for gaining control of the court.

Acknowledging that the Supreme Court would be controlled by a conservative majority for the foreseeable future, Savage reported, “Liberals have already started to attack the legitimacy of the majority bloc and discussed ways to eventually undo its power without waiting for one of its members to retire or die.”

One of the tactics is court-packing by regaining control of the government in 2020 and having the new liberal president increase the total number of Supreme Court justices, allowing the president to create a liberal majority. Another scheme is to find a means to “impeach, remove, and replace Justice Kavanaugh.” In the past, opportunities to fill Supreme Court seats depended on the death or retirement of a justice.

Pinning their hopes on regaining power sooner rather than in the distant future, the liberals are working overtime to come up with a workable scheme after the failure of the last one, which hinged on destroying the reputation and life of a “privileged white male” named Brett Kavanaugh.

On the day after Kavanaugh was sworn in, former Secretary of State and failed 2016 presidential candidate Hillary Clinton gave a CNN interview with Christine Amanpour in which she criticized Trump and the process that led to Kavanaugh’s confirmation, and issued a call for the foot troops of her political party to engage in incivility.

Clinton declared, “You cannot be civil with a political party that wants to destroy what you stand for, what you care about.” What the left cares about here is abortion and the future of Roe v. Wade.

Within hours of the 50–48 vote confirming Kavanaugh, Samantha Ness, a special education teacher in Minnesota, posted a tweet that read: “So whose [sic] gonna take one for the team and kill Kavanaugh?” Ness, who was placed on paid administrative leave, has resigned since her tweet became public.

During the Kavanaugh hearings, we heard Corey Booker, a U.S. senator, refer to accuser Christine Blasey Ford’s “truth” and how we were not to question her account of an undocumented, uncorroborated, and unverifiable charge meant to destroy a man’s life. We heard another Democrat senator, Mazie Hirono, argue that Kavanaugh was not entitled to the presumption of innocence, a bedrock principle that has undergirded our nation. We also watched as the Democrat senators discounted the exculpatory findings of the seventh FBI investigation of Kavanaugh. No apologies, just more stoking the fires of political unrest to incite foul play from the weak-minded.

The threats against Kavanaugh and his family that have continued beyond his confirmation bring to mind Max Allan Collins’s book “Supreme Justice,” a 2014 fictional account of the assassinations of two conservative U.S. Supreme Court Justices appointed by a far-right president. The assassin is a man who is angry because the conservative justices have overturned the sacred cow of Roe v. Wade, strengthened the Patriot Act, and seemed bent on weakening the First Amendment. The lead investigator is a liberal, retired Secret Service agent who figures out that the murders are about changing the balance of power on the court so the incumbent liberal Democrat now serving as president can appoint like-minded justices before his term ends. An effort to kill a third conservative is thwarted by good law enforcement and increased security around the surviving justices.

What have we here? Pay attention to language and messengers. We can learn a lot about the values and principles of people from the language they use and their creative outputs. Does art imitate life, or does life imitate art?

Many of us remain unsettled by the unexpected death of Justice Antonin Scalia, the handling of his body, and the lack of a real investigation. We now know a lot about the deep state and the level of dysfunction in the Obama Justice Department.

Collins is a liberal Democrat who used his creative talent to spin a tale that could well have inspired violence against a justice. It could still. We now know from the handling of Scalia’s death and the lives of justices, that they lack real security. Given the war against conservatives, it is critical for the president and Congress to allocate funds for real protection for Supreme Court justices.