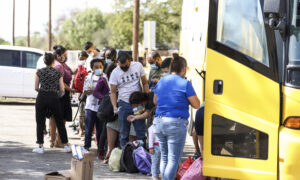 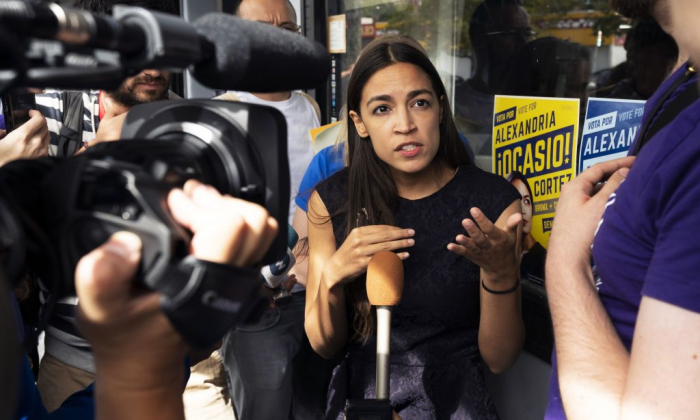 With less than a month to go before the 2018 midterm elections, the Democratic Party is attempting to make the most of its opposition to President Donald Trump as its best chance for electoral victory.

Most of the party’s candidates for all 435 seats in the House of Representatives and the one-third of the Senate that’s in play are supporters of the anti-Trump “resistance.” A growing number of those candidates favor policies that are in sync with far-left radical groups such as the Democratic Socialists of America (DSA), the largest socialist membership organization in the United States.

In the past two years, grassroots opposition to Trump at the party’s base of activists has pushed Democrat officeholders steadily to the far left end of the political spectrum, with a concomitant embrace of socialist policies. Many Democratic Party candidates competing in local and state races also are increasingly running to the extreme left this year.

To achieve their electoral goals, the Democrats are employing a multi-tiered approach. In conservative states that voted for Trump in 2016, the party has nominated candidates who project moderate images but who, in most cases, default to socialist positions. In reliably “blue” states such as Massachusetts and New York, Democratic candidates are openly proclaiming a commitment to socialism.

A prominent example of a Democrat candidate running in a “red” state is occurring in Texas. U.S. Rep. Beto O’Rourke, frequently described as Kennedyesque, is challenging the Republican incumbent, Sen. Ted Cruz. Cruz currently leads O’Rourke by six points, according to the latest Real Clear Politics average of polling data.

According to the Texas Observer, O’Rourke had high praise for socialist Sen. Bernie Sanders (I-Vt.), calling him the “absolute champion” of single-payer health care in the United States, and his presidential campaign “transformational [and] the catalyst for the conversation this country has needed to have for a long time.”

‘Future of Our Party’

The most prominent socialist running as a Democrat this year is Alexandria Ocasio-Cortez, the 28-year-old former bartender who won a primary election last June against 10-term incumbent Rep. Joseph Crowley in New York. Her political résumé includes membership in the DSA and working for Sanders when he ran for president in 2016.

An avalanche of mostly favorable mainstream coverage of Ocasio-Cortez’s primary win and her assured victory in the midterms—since the Republican opposition in her New York City district is only token—have quickly brought her to the fore as a potential new leader of the party.

After her primary victory, DNC Chairman Tom Perez enthusiastically declared Ocasio-Cortez as representing “the future of our party.” Not coincidentally, her heightened profile has also helped to attract thousands of new members to the DSA.

In an email last August, Diana West, the author of “American Betrayal” and a nationally syndicated columnist, described the DSA as “both communist and Marxist—and ‘progressive’ and Alinskyite and Fabian, as well—in the sense that all of these groups and factions seek to remake America according to the same socialist, centrally planned, varyingly totalitarian vision.”

In addition to new insurgent candidates, many prominent Democrats already serving in Congress have been acting like far-left socialists since Trump took office on Jan. 20, 2017.

Meanwhile, a number of potential candidates for the 2020 Democratic nomination for president also support radical positions advocated by socialists, such as  Medicare for All, the abolition of ICE (the U.S. Department of Homeland Security’s Immigration and Customs Enforcement), increasing the minimum wage to $15, and free college for all.

As a result, far-left socialist policy proposals are making significant inroads in the Congress. In 2013, Sanders’s proposal of Medicare for All had no co-sponsors in the Senate. Today, more than one-third of Democratic senators have signed on, including some top potential contenders for the party’s 2020 presidential nomination such as Sens. Cory Booker (N.J.), Kirsten Gillibrand (N.Y.), and Kamala Harris (Calif.).

While none of these senators except Sanders identifies as a socialist, they all enthusiastically embrace one of the DSA’s primary goals, government-run single-payer health care. H.R. 676, a single-payer proposal in the House sponsored by Democratic National Committee Deputy Chairman Rep. Keith Ellison (D-Minn.), similar to the one in the Senate, has 122 co-sponsors—two-thirds of House Democrats.

“Forty-two people [are] running for offices at the federal, state, and local levels this year with the formal endorsement of the Democratic Socialists of America, the organization says,” according to an article by the Associated Press’ Steve Peoples. “They span 20 states, including Florida, Hawaii, Kansas, and Michigan. Democratic socialism has become a significant force in Democratic politics.”

On Oct. 9, the DSA’s website listed 28 Democrat Party candidates that it’s formally endorsed. All of them have had to undergo an in-depth DSA vetting process to establish their socialist bona fides.

In Florida, the Democratic candidate for governor, Tallahassee Mayor Andrew Gillum, like O’Rourke, has declined to say if he is a socialist. As an editorial in National Review cautioned, however, Gillum “is campaigning as a member of the Sanders/Ocasio-Cortez wing of the party: He wants to abolish ICE, raise the minimum wage to $15, pass single-payer health care, and increase taxes across the board.”

This past summer, author Trevor Loudon (who is a contributor to The Epoch Times) exposed the Left Inside/Outside Project, organized by a collaboration of U.S. communist and socialist organizations, including the DSA, with the objective of “building power inside and outside the Democratic Party.” In 2017, the DSA outlined an ambitious new plan of its own to elect open socialists by running them as Democrats.

The official minutes of the 2017 DSA convention noted that it “commits the NPC (National Political Committee) to expand the work of the National Electoral Committee in supporting chapters’ efforts to develop and run viable openly socialist candidates for office (either in Democratic primaries or as independents).” Last November, Politico cited a DSA official, Daniel Moraff, who said, “We are here to win elections.”

Last July, a campaign rally in Wichita for Thompson was the first stop for the party’s newest star, Ocasio-Cortez, joined by her mentor, Sanders, as she began traveling around the country to support and raise money for local socialist Democratic candidates.

As The Guardian reported in an article titled “They thought this was Trump country. Hell no,”

“Through the thick cement walls of the downtown Wichita convention hall, we heard 4,000 Kansans roar in anticipation of speeches by Sanders, Thompson, and Ocasio-Cortez in support of Thompson’s run for Congress.”

While recent polls have shown Thompson far behind his Republican opponent, the grassroots energy and the attention that his campaign has generated in a deep red state would seem to point to a positive future.

Anti-Semitism in the Mix

A dirty little secret about the socialist left, which now includes many Democrats, is their frequent embrace of anti-Semitism. As Chris Pandolfo wrote in the Conservative Review last September:

“As insurgent hard-left socialists become the face and the ‘future‘ of the Democratic Party, their connections to anti-Semitic organizations and attitudes are becoming more apparent.”

Gillum, for example, “has aligned himself with several prominent anti-Semitic organizations known for promoting boycotts of Jewish goods and individuals,” according to Adam Kredo of the Washington Free Beacon.

Ayanna Pressley, a socialist Democrat congressional candidate in Massachusetts in the Ocasio-Cortez mold, who defeated 10-term progressive Rep. Michael Capuano in the September primary, held a campaign event outside of a radical mosque in Boston last July. In the past, the mosque has hosted events such as one last February titled “The Secret Relationship between Blacks and Jews: The Homosexual Conspiracy!”

On Aug. 7, Palestinian-American Rashida Tlaib, another open socialist and DSA member, won the Democratic primary in Michigan’s 13th Congressional District and is running unopposed in the November elections. She will be the first Muslim woman member of Congress. According to In These Times, in answer to a question about defense policy, Tlaib said, “I don’t support military operations.”

What Tlaib does support is the Palestinian cause, including the right of return, a one-state solution, and BDS—the radical left boycott, divestment, and sanctions movement against the state of Israel. In March 2018, the Family Research Council issued a report, “Left-Wing Anti-Semitism,” which described BDS as a movement that has “devolved into a full-bore attack on Israel’s existence, Zionism, and on Jews themselves.”

In 2018, it has been said by many observers, among them CNN’s Chris Cillizza in an article on the cable news channel’s website, that “this isn’t your father’s Democratic Party.”