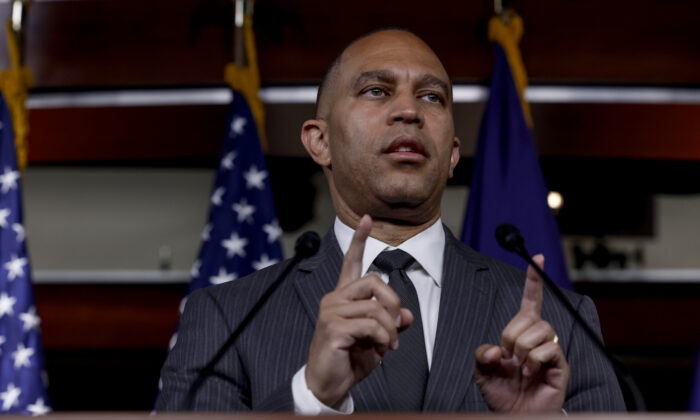 Democrats gathered behind closed doors to elect their new leaders for the 118th Congress, after Pelosi, the House’s current speaker, announced she wouldn’t seek a leadership position. Democrats also chose current Deputy Speaker of the House Katherine Clark (D-Mass.) as minority whip and Rep. Pete Aguilar of California as Caucus chair; those are the party’s No. 2 and No. 3 leaders in the House.

Jeffries, 52, is the current Caucus chair.

Prior to the announcement of official results, several Democrats confirmed Jeffries’s election to the spot, which reportedly was unanimous.

“Never before has an African American leader or any leader of a color held the top position for either party in either chamber,” Schumer said.

Aguilar, who during the 117th Congress has served under Jeffries as vice chairman of the Democratic caucus, also congratulated his colleague in a Twitter post.

“I am so proud to serve alongside Hakeem in House Democratic Leadership,” Aguilar wrote. “For the last two years, I’ve had the privilege of standing with him as he helped guide our Caucus through our significant legislative wins.

“He is a principled, steady hand at the wheel who always puts people over politics,” Aguilar continued. “His historic election is a victory for our Caucus and for the American people. I know he will work tirelessly to keep our diverse Caucus united as we work to deliver for our communities and take back the House in 2024.”

Jeffries announced his bid for the No. 1 spot in a Nov. 18 letter to other Democrats (pdf).

“I hope to lead an effort that centers our communication strategy around the messaging principle that values unite, issues divide.

“We must make sure that the perception of the Democratic brand matches up with the reality that we do in fact authentically share values that unite the Heartland, Urban America, Rural America, Suburban America, and Small Town America,” Jeffries wrote.

“This undertaking will not be easy. We must show up early and in unexpected places. It will require the involvement, creativity, and input of every single House Democrat to be successful. Together, we can make it happen.

“I am grateful for the confidence that you have placed in me as the Caucus Chair during such tumultuous times. Building upon my leadership experience and our shared journey, I look forward to creating a better future together for all Americans and humbly ask for your support.”

Addressing reporters at a Nov. 30 press conference after the election, Jeffries said, “It’s an honor to stand before you as the incoming House Democratic leader for the 118th Congress.”

Jeffries said that he was “excited to advance the ball for everyday Americans” as Democrats move into the 118th Congress.

Jeffries, who ran unopposed, was joined by Aguilar and Clark during his press conference.

“I will fight for our agenda and your priorities while running a strategic defense,” Clark said in her statement announcing her bid for the role. “You can trust me to listen to all corners of the Caucus, be results-oriented, and be resolute in my commitment to our values.”

Notably, the party’s No. 4 position, that of assistant minority leader, remains up for grabs.

Clyburn, citing the need for southern representation among Democratic leadership, announced that he would bid for the spot, despite stepping down from the higher-ranking role of whip.

On Nov. 30, Rep. David Cicilline (D-R.I.) announced that he would challenge Clyburn for the position.

Cicilline, a gay man, said he decided to run because of LGBT issues.

“As we head back in the minority, it is critical that we have a fully inclusive leadership team that represents the diversity of our caucus and the American people,” Cicilline wrote in a Nov. 30 letter to Democrats. “As Speaker Pelosi often reminds us, ‘our diversity is our strength, our unity is our power.’

“I believe we must have an LGBTQ+ member at the leadership table, especially when so much is at stake for our community in the coming years.

“As we look ahead to the 2024 presidential election, we are faced with the real possibility that the Republicans may nominate Governor DeSantis, who authored and passed the ‘Don’t Say Gay’ bill in Florida.

“There is no doubt that the new Republican majority in the House will try to push the same anti-LGBTQ+ agenda that we have seen at the state level.”

The vote for the No. 4 position, which until Cicilline’s announcement was uncontested, will be taken within the Democratic caucus on Dec. 1.

“The world is better for Speaker Pelosi’s leadership,” Jeffries said during his Nov. 30 press conference.

Pelosi, Hoyer, and Clyburn—all 82 or 83—have been among party leadership for years, with Pelosi becoming a senior party leader in 2003. Hoyer was added to the highest level of leadership a year later, with Clyburn joining in 2007.

Younger Democrats have been agitating for change at the top. The caucus includes three of the five youngest members of Congress—including Reps. Alexandria Ocasio-Cortez (D-N.Y.), Sara Jacobs (D-Calif.), and Ritchie Torres (D-N.Y.).

The average age of House Democrats is 59, according to data from FiscalNote, and tensions have grown among the generations in recent years.

Generational fractures between the party’s old guard and newer Democrats first emerged as early as 2018, when Democrats extracted a pledge from Pelosi that she wouldn’t serve as speaker again. She later reneged on that promise and was reelected speaker in the 117th Congress.

Following this year’s midterms, Pelosi announced that she would step down from leadership.

“Scripture teaches us that for everything there is a season, a time for every purpose under heaven,” Pelosi said at the time, in a speech on the House floor. “For me, the hour’s come for a new generation to lead the Democratic caucus that I so deeply respect, and I am grateful that so many are ready and willing to shoulder this awesome responsibility.”