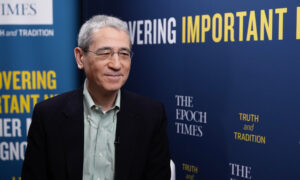 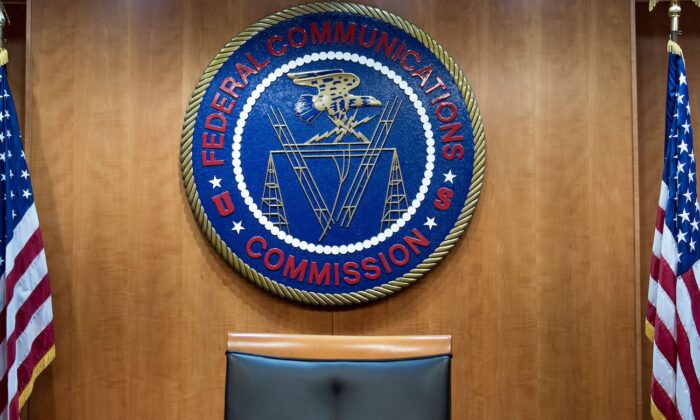 A view of the commission's hearing room before a hearing at the Federal Communications Commission in Washington on Dec. 14, 2017. (Brendan Smialowski/AFP via Getty Images)
Thinking About China

The Federal Communications Commission (FCC) on June 17 proposed additional restrictions on China’s and Russia’s telecommunications equipment. The FCC voted to explore a ban on all future U.S. company purchases of telecom equipment from corporations that pose a national security risk, including five Chinese companies that the FCC specifically labeled as such: Huawei, ZTE, Hytera, Hikvision, and Dahua.

This sounds great on the surface, but scratch a bit and one realizes that to really protect American tech requires much tougher and quicker action. Despite the headlines, the Democrats are going soft on China tech. They have control of the presidency, Senate, and House, so could relatively easily legislate much tougher laws against China in the technology space. But instead of deepening and broadening legislation that bans Huawei immediately, for example, the FCC is voting for more discussion. Talk not action.

The New York Times and other establishment media cover politicians who talk and legislation riddled with loopholes as a “bipartisan push in Washington” against China on tech issues, while omitting party differences that indicate a softer approach by the Democrats. As recently as June 16, U.S. Secretary of the Treasury Janet Yellen warned against complete tech decoupling with China, according to Hong Kong media. Much of the U.S. media, however, spun this as Yellen arguing for some decoupling. Her comments were sufficiently vague as to lead each side to spin it their way. But Washington cognoscenti know that the Treasury Department is typically the softest part of government on China.

Democrats are slow to act against China, according to one of my Washington sources, because of their focus on compromise, allies, and unity, rather than principle. This allows just a few active Democrats or allies, if influenced by corporate interests, to soften China bills with loopholes so that everyone can claim a win.

According to a Republican staffer in Congress, who asked to remain anonymous due to potential retaliation, “I think there are members on both side[s] that are working to decouple.” He said that “Dems and GOP see the plan ahead different. Dems and some moderate GOP see that this is a temporary issue and that eventually things will ‘return to normal,’ but I believe that some Dems and mostly GOP do realize that ‘return to normal’ is likely not possible.”

According to Nazak Nikakhtar, an attorney who specializes in international trade and national security at Wiley Rein LLP, “We see very forward-leaning calls for action by senators such as Rubio, Hawley, and Cotton, which understand that national security doesn’t just happen—it requires difficult choices.”

Most congresspeople have an incomplete understanding of the difficult choices being forced upon American government by the Chinese Communist Party. The few who do, are usually too concerned about their careers to lean forward. This impedes American agility and progress on China sanctions and tariffs. Subsidies to protect U.S. strategic industries like technology and PPE are provided to the biggest corporate players with the most powerful lobbyists.

Sanctions, subsidies, and tariffs that protect small businesses in the strategic industry space are also required to keep the entire ecosystem of American industry from being wiped out by hostile and manufactured fluctuations in the market.

Such protection is decried by economists who cleave to an old era when Western corporations could outcompete planned economies on the global market. But those times are changing. China broke the mold on defeating U.S. corporations, including in the tech space, much of which is a strategic industry necessary for secure communications, and therefore for the maintenance of full U.S. sovereignty.

Where China’s industrial espionage destroys shareholder value, better national systems of online security are needed. Small businesses need a national-level online security umbrella, other subsidies, and public goods that incentivize companies to enter the strategic industry space. They also need tariffs that protect that space from aggressive dumping of goods by China’s pricing below market rates. Tariffs are needed, because subsidies can always be matched by China to zero-out their effect.

Nikakhtar, who was under secretary of industry and security during the Trump administration, wrote in an email that “one part of the equation is understanding the full scope of threats facing the U.S., and very few representatives take the time to understand this at the level of depth required. The second part is proposing laws that address those risks directly, meaningfully, and in the long term. Very few in Congress have solved both sides of the equation.”

The FCC is one of those U.S. agencies that has not solved the equation. Its call for public comment on China tech is evidence to that effect, as it is more of a delaying tactic, or worse, a way to rally corporate interests against further China tech restrictions.

According to Nikakhtar, “The fact that the FCC unanimously voted to explore such prohibitions is impressive but, typically, requests for public comment on regulatory prohibitions by federal agencies receive resounding opposition by stakeholders. The FCC generally knows this.”

The proof will be in the pudding. According to Nikakhtar, “If the FCC decides to move forward with the prohibitions, notwithstanding, it would be signaling to U.S. businesses and allied nations that it is moving in line with President Biden’s message to allies that threats need to be addressed.”

So far, the U.S. government has only addressed a few high-profile Chinese tech companies, like Huawei and ZTE. Many more tech companies from China are flying under America’s radar. Nikakhtar wrote, “The range of existing threats is extensive—far beyond just a handful of companies.”

The congressional staffer with whom I corresponded said that he is “not convinced that either party (at least the mainstreams) have come to realization that this isn’t China of the 1990s … this is a different China … a China that doesn’t want to return to the Western definition of ‘normal.’”

The mainstream wings of both parties are also willfully blinded by lobbyists and corporate cash.

Rural telecom companies, which need the cheapest 5G gear to reach far-flung customers, are protesting additional restrictions on Chinese companies that offer below-market pricing to drive out competition from the West. The telecom company lobbyists have substantial sway over legislators and FCC commissioners, who tend to rotate through corporate and lobbyist telecom jobs before and after their government “service.”

To effectively counter China’s Big Tech, citizens must get more involved at the grassroots level, to ensure that their political representatives serve their interests rather than the telecom lobbyists. Those lobbyists are happy to ensure that telecom companies get subsidized by taxpayers in front, while selling high-tech manufacturing capabilities to China behind the scenes. American corporations in strategic sectors need a smart mix of guardrails, subsidies, and tariffs to defend themselves against China’s aggressive pricing and technology acquisition.

American shareholders, too, must get more involved, think critically, and ensure that their CEOs are following shareholder interests, and not the short-term gains that max out C-level compensation while degrading the competitiveness of our tech corporations in the long-term. CEOs paid in stock options that vest in three to five years are insufficiently disincentivized against trading key technologies that have a long-term negative impact on shareholder value, in exchange for market share in China that pumps up stock values in the short-term. American shareholders must fix vesting periods to ensure that their CEOs stop trading technology for market access, which is counter to both shareholder interests and U.S. national security.