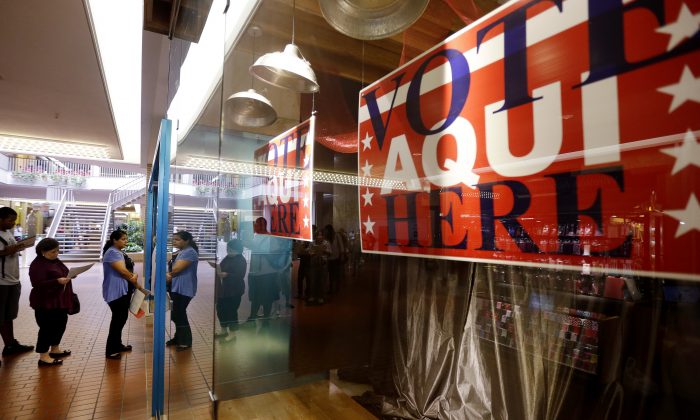 Voters wait in line at a polling place located inside a shopping mall on Election Day, in Austin, Texas on Nov. 6, 2012. (Eric Gay/AP Photo)
Democrats

Democrats Double Down on Election Laws

Shortly before going into August recess, Senate Democrats gave approval for the For the People Act (S.1) to move out of committee for future debate. While the issue has been harshly debated for nearly a year now, it is likely to be near the top of Democrats’ docket after they return.

For some congressional Democrats like Rep. Terri Sewell (D-Ala.), advancing election bills through both chambers is a top priority. In an opinion piece published in the Montgomery Advertiser, Sewell argued that state-level voter integrity laws are putting the Voting Rights Act (VRA) of 1965 “in peril.” Sewell compared the “state-level effort to restrict the right to vote” to “modern-day Jim Crow attacks.” On top of this, Sewell criticized the Supreme Court (SCOTUS) for having “dealt a series of disastrous blows to the VRA, gutting key provisions and rendering it all but toothless.”

Speaking about the same subject on the House floor, Sewell referenced two such “disastrous blows” by SCOTUS.

First, she pointed to the 2013 decision in Shelby County v. Holder (pdf), when SCOTUS struck down a section that required federal approval for states to change their voting laws. SCOTUS ruled that the situation had changed so dramatically between 1965 and 2013 that the “extraordinary measures” employed by the bill could no longer be justified.

She also mentioned Brnovich v. Democratic National Committee (2013). Arizona was brought before SCOTUS to defend two laws relating to mail-in or absentee ballots. The first banned anyone other than a legal relative or caregiver from collecting these ballots; the second required that ballots cast in the wrong precinct be discarded. The Democratic National Committee (DNC) argued that these laws constituted an attempt “to deny or abridge the right of any citizen of the United States to vote on account of race or color” and were a violation of the VRA. SCOTUS sided 6-3 with Arizona, determining that neither rule was enacted by the state with discriminatory intent and thus was not a VRA violation.

In response to this, Sewell says she has introduced a bill in the House called the “John R. Lewis Voting Rights Advancement Act,” (H.R. 4) that will “restore key provisions of the VRA that were gutted by the Supreme Court.” Further, the bill “would once again prohibit any state or jurisdiction with a history of discrimination from implementing any election changes without receiving preclearance from U.S. Department of Justice.”

Sewell’s allegations and proposed legislation point to a larger trend in the Democratic Party.

H.R. 4 is only one of many Democratic proposals for election bills. Sen. Jeff Merkley’s (D-Ore.) “For the People Act” (S.1) is the frontrunner among these proposals, having been moved out of committee for later debate; Rep. John Sarbanes (D-Md.) introduced the same bill in the House (H.R. 1). Back in the Senate, Sen. Jon Ossoff (D-Ga.) introduced the “Right to Vote Act” (S.2615).

Some Democrats are looking to avoid Republican efforts at filibustering elections bills by changing Senate rules. Rep. Jim Clyburn (D-S.C.) in an interview with Mehdi Hassan added his opinion that the filibuster should not be allowed in order to block these kinds of legislation. “Constitutional rights questions should not be subjected to a filibuster,” Clyburn explained. Sen. Amy Klobuchar (D-Minn.) was asked about changing the filibuster to enact election legislation and said that she was in favor of reforming or eliminating the rule, explaining “at some point you gotta get things done.”

A few challenges make this unlikely to happen however. First, Press Secretary Jen Psaki said in a White House press conference that President Biden “does not support the elimination of the filibuster because it has been used as often the other way around.” Second, moderate Democrats in the Senate like Sen. Joe Manchin (D-W. Va.) have said that they would not end the filibuster.

But the Biden administration does have plans to use executive power in response to these allegations. Vice President Kamala Harris said in a press conference that “we are going to assemble the largest voter protection team we have ever had to ensure that all Americans can vote.” It is not yet clear what this voter protection team will entail, but it is a clear sign of the administration’s position.

However, studies are inconclusive about whether voter ID and other security measures disproportionately affect minorities. A 2017 study by the University of Chicago determined that “strict identification laws have a differentially negative impact on the turnout of racial and ethnic minorities in primaries and general elections.” But this conclusion was challenged in a follow-up study by researchers at Yale, Stanford, and the University of Pennsylvania. They ruled that poor methodology and analysis in this study skewed the result, and that results were inconclusive when these errors were corrected. A Harvard study was even more confident that voter ID laws “have no negative effect on registration or turnout, overall or for any group defined by race, gender, age, or party affiliation.”

It is nevertheless likely that congressional Democrats will continue to push the issue after they return from their recess. Despite their majority, they will face many challenges to first passing and then upholding this legislation. The first major challenge to these efforts will likely come in the Senate, where Republican opponents may filibuster any proposed legislation. If Senate Democrats try to change the filibuster rules as Clyburn and Klobuchar suggested, the bill may squeak through by a thin party-line vote—but Democrats can’t spare a single defection. The second challenge for Democrats will likely come from the courts. Affected states are sure to try and take the matter to the Supreme Court. And given SCOTUS’ earlier rulings, it is unclear whether any of these bills would be able to survive the challenge.