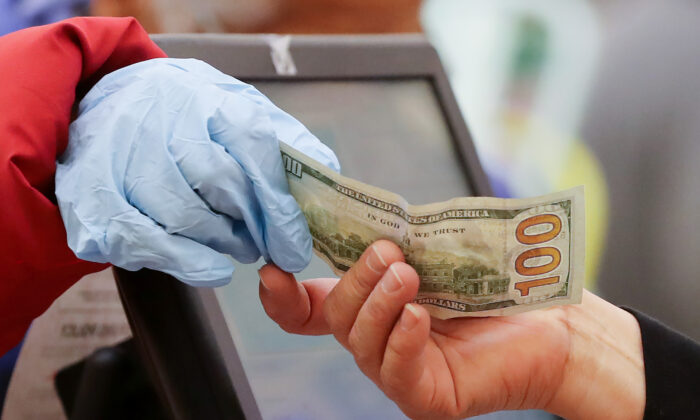 A woman pays cash while wearing gloves during special hours open only to seniors and the disabled at Northgate Gonzalez Market, a Hispanic specialty supermarket in Los Angeles, Calif., on March 19, 2020. (Mario Tama/Getty Images)
By Isabel van Brugen

House Democrats on March 23 unveiled a $2.5 trillion emergency bill in response to the package under negotiation by the Senate that aims to stem some of the economic toll of the CCP virus pandemic.

The 1,400-page proposal, released Monday evening, offers each taxpayer in a household $1,500—or $3,000 for joint returns—and $1,500 for each child, with a maximum payment of $7,500 for a family of five under the “Take Responsibility for Workers and Families Act.”

The cash payment would have to be repaid by individuals with an income of more than $75,000, or more than $150,000 for couples filing tax returns jointly. Households may choose to repay the sum over the course of three years.

In contrast, the Senate proposal laid out Sunday provides a quick, one-time stipend of about $1,200 per individual, $2,400 for couples, and $3,000 for a family of four, with the money cut off at higher income levels.

The House Democrats’ proposal also offers to funnel more than $150 billion into the health care system—to health care providers and community health centers—as the spread of the CCP virus continues to spread rapidly across the nation.

Hospitals, under the Democrats’ bill, would receive an additional $80 billion in low-interest loans, $5 billion more than what has been offered by Senate Republicans’ nearly $2 trillion package.

In their proposals, both Senate Republicans and House Democrats have offered allowing businesses to carry back net operating losses from this year, 2019, and 2018. However, the House bill places has restrictions in place on what businesses can qualify.

Meanwhile, concerns have been raised over the allocation of expenses in the House Democrats’ proposal toward areas that appear unrelated to the COVID-19 outbreak, including $35 million for the “operations and maintenance” of the John F. Kennedy Center for the Performing Arts in Washington, D.C., reported Fox News.

Republicans and Democrats were still struggling on Monday to reach an agreement on a far-reaching CCP virus stimulus package, after failing to reach a deal over the weekend. Democrats said it contained too little money for states and hospitals and not enough restrictions on a fund to help big businesses.

The 49-46 vote left the $2 trillion measure short of the 60 votes needed to advance, as the chamber remained deadlocked for a second day. Only one Democrat, Doug Jones of Alabama, voted with Republicans to advance the bill. He told CNN that he voted because he thinks “there’s been great progress.”

“I believe that we needed to really send a message to the American people and to both side of the aisle that the clock is ticking, that we need to get this done and we need to get it done now, and the best way to do that is to proceed,” he said.

According to official government data collated by Johns Hopkins University, by the end of Monday, there were 46,450 confirmed COVID-19 infections in the United States and 590 deaths.