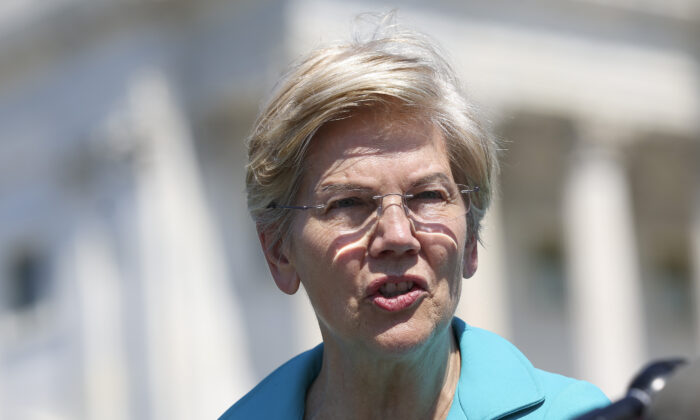 Democrats in both the House and Senate are calling for the shutdown of “deceptive” crisis pregnancy centers amid a wave of violence across the United States by pro-abortion activists, prompting GOP backlash.

Crisis pregnancy centers are nonprofits founded for the purpose of providing counseling, support, and resources to persuade women against having an abortion. Often, services provided by these organizations include financial assistance, child-rearing resources, and adoption referrals, among others.

Specifically, crisis pregnancy centers often furnish new and expecting mothers with essentials like baby formula, diapers, and clothing in an effort to give women facing financial hardship an alternative to abortion.

Following an unprecedented leak showing that the Supreme Court was poised to overturn Roe v. Wade—which it later did in the majority opinion of Dobbs v. Jackson Women’s Health Organization—pro-abortion activists took to the streets. In many cases, demonstrations turned violent and crisis pregnancy centers found themselves facing violent attacks.

On June 10 Luke Cirillo, the CEO of First Image, which runs a series of crisis pregnancy centers in Portland, Oregon, received a call from police that pro-abortion activists “threw an incendiary through one of the windows [of one of the centers] which lit a significant fire in the back room.”

This was not the only attack against First Image in the Portland area: on May 5, over a month before, another First Image facility had been vandalized and had the graffiti “[expletive] CPCs [crisis pregnancy centers]” written on it.

On the other side of the nation, a crisis pregnancy center run by CompassCare in Buffalo, New York was firebombed by pro-abortion agitators. Photographs posted on Facebook showed the effects of this attack, with windows blown out and glass lining the sidewalk outside of the facility.

“Jane was here,” a reference to “Jane Roe,” was also written on the wall at the side of the facility.

The FBI has said that they are investigating the attacks, but crisis pregnancy centers have continued to face the fear of further violent attacks by pro-abortion radicals.

On July 7, two crisis pregnancy centers in Massachusetts—the Clearway Center and the nearby Problem Pregnancy clinic—were also vandalized. “Jane’s Revenge,” was painted on the doorways to both clinics.

Even in the nation’s capital, crisis pregnancy centers are not safe from the spurt of violence.

Photos posted to Twitter show the door of the Capitol Hill Crisis Pregnancy Center covered in red paint and the words “Jane’s Revenge” written in graffiti on a nearby wall.

Despite the violence being faced by these nonprofits, an increasing number of Democrats have advanced calls to shut crisis pregnancy centers across the nation down, calling them “deceptive.”

According to Sen. Elizabeth Warren (D-Mass.), crisis pregnancy centers “are there to fool people looking for pregnancy termination help.”

Warren is here referencing past controversies in which crisis pregnancy centers allegedly marketed themselves as abortion providers only to later reveal that they did not offer abortion and try to persuade women against getting one, which has formed the backbone of Democrats’ attacks on the nonprofits.

Noting that these facilities “outnumber abortion clinics by 3–1” in her home state of Massachusetts, Warren argued that “We need to shut them down all around the country.”

“You should not be able to torture a pregnant person like that,” Warren added.

In a tweet, Warren expanded on the comments, saying: “With Roe gone, it’s more important than ever to crack down on so-called ‘crisis pregnancy centers’ that mislead and deceive patients seeking abortion care. My bill with @SenatorMenendez would stop these harmful practices.”

The bill in question, dubbed the “SAD Act,” is sponsored by Sen. Bob Menendez (D-N.J.) and cosponsored by Warren and 15 other Democrats.

In lieu of “pregnant women,” the bill’s language refers to “pregnant people.”

Relying on the claim that crisis pregnancy centers “are anti-abortion organizations that present themselves as comprehensive reproductive health care providers with the intent of discouraging pregnant people from having abortions,” the SAD Act would “direct the Federal Trade Commission to prescribe rules prohibiting disinformation in the advertising of abortion services, and for other purposes.”

The legislation calls “The freedom to decide whether and when to have a child … key to the ability of an individual to participate fully in our democracy,” suggesting that by offering an alternative choice to abortion crisis pregnancy centers are opposed to freedom.

The bill is a bold move for Menendez, who has often tried to present himself as a more moderate type of Democrat. In 2021, the New Jersey Republican candidate was defeated by the Democrat after a shockingly close battle. Though he is not up for reelection until 2024, the legislation could be distasteful to many Catholic voters in his state.

Other surprising cosponsors of the bill include Sens. Jon Tester (D-Mont.) and Mark Warner (D-Va.), who have also historically presented themselves as more moderate wings of the party.

In another tweet responding to Smith’s comment, Sen. Marsha Blackburn (R-Tenn.) defended the work done by crisis pregnancy centers and called on Smith to join her in visiting one.

“I invite you to come visit a crisis pregnancy center with me. @SenTinaSmith,” she added.

Sen. Ted Cruz (R-Texas) in another tweet responding to Warren’s calls to “crack down” on crisis pregnancy centers echoed Blackburn’s sentiments, and blasted Democrats for their attacks on the groups.

“Oh, the humanity!” Cruz wrote. “In the Left’s world view, it’s ‘deceptive’ for a Crisis Pregnancy Center to actually help a mother give birth to her child.

“In their own words, they want to ‘crack down’ on birth and on adoption,” he added.

Kristen Day, a representative of the group Democrats for Life, said that attacks on crisis pregnancy centers on the basis of past controversies involving misleading advertising are deceptive, noting that “it’s a very small portion” of pregnancy centers that have done this, despite Democrats’ efforts to paint the practice as more widespread.

“No industry is perfect,” Day continued. “But when you’re talking about … pregnancy resource centers, their whole mission is to support pregnant women, [and give] them that real choice to have their baby. They provide diapers, and clothing, and job training—everything that, as a Democrat, you’d want to be provided.

“As Democrats, we want to help those in need,” Day said, citing calls by Warren and others to shut down pregnancy centers.

“Elizabeth Warren … and others calling to shut these facilities down … are not acting like true Democrats, they are turning their backs on the vulnerable, and the most vulnerable.”

Beyond this, Day said, these attacks are “very anti-women.”

Given that these pregnancy centers mostly provide assistance to poor women, the message of the attacks, Day said, is that “if you’re wealthy, you can have your baby, but if you’re poor you should have an abortion. And again, those are not consistent with Democratic values at all.”

Warren and other Democrat lawmakers did not respond to a request for comment on the issue.