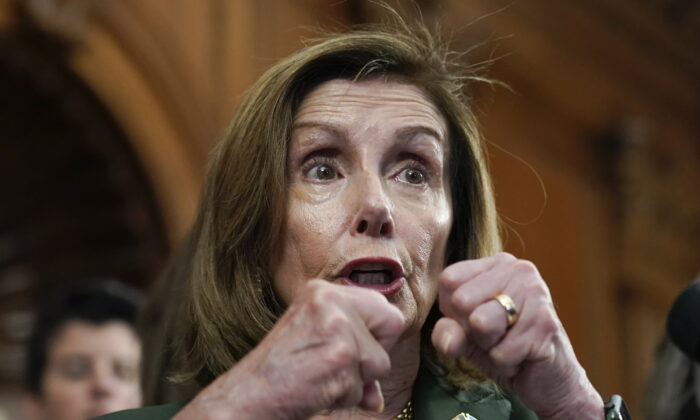 House Democrats are moving forward with an Aug. 12 vote on the $700 billion Inflation Reduction Act despite the lack of Congressional Budget Office (CBO) scores—meaning that the full financial implications of the bill are unclear.

On July 27, Sen. Joe Manchin (D-W.Va.) announced that he had reached a deal with Senate Majority Leader Chuck Schumer (D-N.Y.) to pledge his support for a $700 billion spending bill, which is supposed to bring in $725 billion in new revenue to the federal government and reduce the deficit by $292 billion annually.

The bill, dubbed the Inflation Reduction Act, was the product of a year of harried negotiations, compromises, and disappointments for Democrats as they tried to pass the much larger $1.75 trillion Build Back Better (BBB) Act.

Historically, lawmakers have waited for the nonpartisan CBO’s full economic appraisal of legislation, which paints a clearer picture of the long term effects of a bill on federal revenues, expenditures, deficit spending, and national debt. But given the wide scope of the Inflation Reduction Act, the CBO has only had time to release preliminary, incomplete estimates about the long-term effects of the bill on the U.S. economy.

Still, Democrats seem to be on track for a vote on the bill sometime during the afternoon of Aug. 12, despite the lack of CBO scoring.

Because the bill has already been passed in the Senate, House passage of the bill will send the legislation straight to the desk of President Joe Biden, who has said he will sign it.

Included in the bill’s $700 billion in new spending is an $80 billion appropriation to the Internal Revenue Service—six times the agency’s current budget—as well as an array of new climate policies and tax incentives for individuals and corporations who switch to renewable energy sources and low-emission vehicles.

The bill also includes a series of new taxes.

The most substantial of these is a 15 percent minimum tax on corporations that make more than $1 billion per year. Though the law currently sets the tax rate for U.S. corporations at 21 percent, many mega-corporations end up paying a substantially lower rate after exemptions, write-offs, and tax code workarounds are taken into account.

The effect that this new tax requirement will have on consumer prices and workers’ wages is disputed. But Preston Brashers, a senior tax policy analyst at The Heritage Foundation, predicted in an interview with The Epoch Times that the new tax would cause prices to surge and wage growth to slow or stagnate.

Pelosi Likely Has the Votes

In a compromise with Sen. Kyrsten Sinema (D-Ariz.) to win her support, Democrats also added a 1 percent excise tax on corporate stock buybacks, a practice commonly used by retirement account managers to increase the value of clients’ retirement portfolios.

Critics have also expressed concerns about the new health care policies instituted by the bill.

The bill would, for the first time ever, allow Medicare Part D to negotiate with prescription drug manufacturers, who will have no choice under the legislation but to enter negotiations or face a massive 95 percent excise tax as punishment.

While private insurers have long had the ability to haggle with drug manufacturers, such negotiations have been voluntary for both parties. But under the Inflation Reduction Act, drug manufacturers would not be permitted to refuse negotiations upon receiving an offer from the secretary of the U.S. Department of Health and Human Services.

These mandated price controls, the CBO has warned in the past, could greatly reduce medical innovation in the United States—meaning the number of new, life-saving drugs coming to market every year could shrink by as much as 50 percent.

Still, House Speaker Nancy Pelosi (D-Calif.), who rarely brings legislation to the floor that she isn’t certain will pass, seems confident that her slim four-seat majority caucus will vote in favor of the legislation.

Because the Senate has already passed the bill, Republicans and other critics have few means available to stop its final passage.