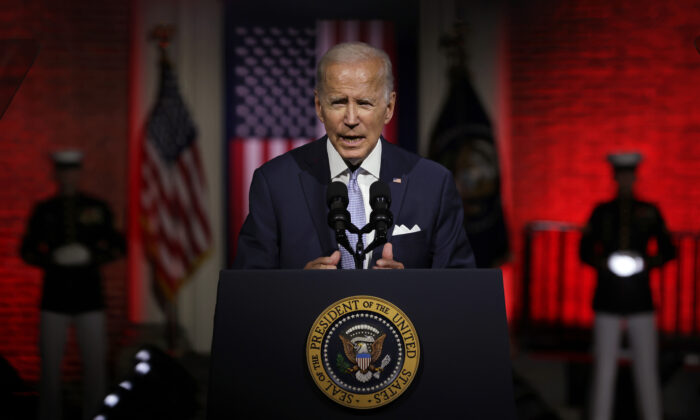 Democrats’ Attempt to Use ‘Trump Hate’ to Boost Midterm Prospects Will Not Work, Conservative Analysts Say

Democrats have pivoted to former President Donald Trump as the main topic of conversation in an attempt to make this year’s midterm contest a one-on-one dust-up between Trump and President Joe Biden, conservative election experts told the Epoch Times.

The move, they say, aims to cover up the dissatisfaction likely-midterm voters may have with President Biden’s performance in office, so Democrats can argue instead that Trump is dangerous, as liberals suffer from the absence of policy solutions that Biden can offer voters between now and the midterm elections that could sway them.

While Biden’s popularity remains low, with recent surveys showing the current president reaching a 38 percent job-approval rating, Americans are also wary of Trump. Dissatisfaction with Biden hasn’t exactly pushed voters to embrace Trump, according to the polls, said the experts.

“I think we could be witnessing the start of a massive American political realignment, as the far-left takes over the Democrat Party,” said Tony Marsh of Savannah Communications, a political consultant who works on independent expenditure strategies aimed at minority voters.

Marsh, a specialist in strategy rather than polling, who helped the GOP win the Virginia governorship last year, cited progressive education policies that alienate families, and the erosion of wages affecting traditional Democrat voters as some of the reasons for the Democratic Party’s decline.

“The Biden administration complained about the ‘millionaires and billionaires’ not paying their ‘fair share,’ but the truth is the Democrat policies are hurting working families and the poor, far more than hurting people who are well off,” said Marsh.

Marsh noted that under Trump the wealth gap started closing for the first time in a long time, after expanding rapidly under Obama, as real wage growth for workers grew from 2016 until the start of the pandemic in 2020.

Marsh said that a 2020 Federal Reserve report found that “families near the bottom of the income and wealth distributions generally continued to experience substantial gains in median and net worth between 2016 and 2019,” while families at the upper end of the income range stayed stable under Trump.

“The Biden administration, on the other hand, has done a terrible job for blacks and Hispanics and working families in this kind of environment,” Marsh said, citing historic inflation that is eating up any wage gains and leaving workers behind.

Marsh added that even attempts at criminal justice reform, which Democrats have said favors minorities, have disproportionately harmed black communities as they deal with increases in crime near their homes.

The result is that the Biden White House is falling back on what they think is their old, reliable strategy since 2016: Hate Trump.

“The Democrat Party really just seems to be so controlled by the extreme left that has no desire to work with Republicans and all they have to offer voters is this hatred of Donald Trump,” said Conor Maguire, a principal and managing director for WPA Intelligence, a conservative political consulting firm.

Also at play for the Biden campaign is the realization that amongst the GOP and undecided voters there is a sizable percentage of voters who are fatigued by the constant drama surrounding Trump even if they don’t see the former president as primarily responsible for the intrigue.

“One problem that I see with Trump is that he tends to fall into the traps that Democrats set for him,” Marsh said.

“Trump almost seems gleeful at times that he can have this type of conflict with Democrats,” Marsh added.

Marsh noted that many inside the GOP think that the party could use a new face, but he also warned that the type of targeting faced by the former president will likely continue for whoever is Trump’s successor, whenever he passes the torch.

Marsh noted that to some extent, the Democrat’s playbook with Trump is just an extension of what they have been doing to every GOP president since Eisenhower.

“I remember demonstrators walking through the streets of New York City with placards calling George W. Bush a fascist,” said Marsh who noted that liberals accused President Ronald Reagan and both Bush presidents of being stupid and even criminal.

But still, the injection of Trump into an election where the former president doesn’t control policy and doesn’t appear on the ballot hasn’t altered the trajectory of the 2022 midterms in favor of the Democrats, if the turnout for primaries is an indication, as it often is, said private pollster Jim Ellis at Ellis Insights, a conservative polling group.

“Compared to the 2018 midterm elections, Republicans are up just under 48 percent in primary turnout nationally, while the Democrats are down just over 18 percent,” Ellis told The Epoch Times.

“You get a sense of just how incredibly short-sighted politicians are when you look at the withdrawal from Afghanistan, which really kind of started Joe Biden’s rapid descent in opinion polls,” Marsh said.

Marsh cited the Afghanistan withdrawal as an example of how Biden likely felt he could count on campaigning for it as a victory during the November midterm elections, trumpeting himself as the ender of America’s longest war.

But it hasn’t turned out that way, said Marsh.

“I don’t think Putin would have had the courage to go into Ukraine if he hadn’t seen what Joe Biden did in Afghanistan,” Marsh added, calling the way the withdrawal was handled “disgraceful.”

Marsh added that Biden may have ruined his strategy of attacking Trump to help Democrats in the midterms with his recent prime-time speech in Philadelphia. Standing in the shadow of Independence Hall with two Marines standing in the background, Biden said that Trump and other so-called MAGA Republicans “represent an extremism that threatens the very foundations of our Republic.”

“Clearly [the president] has polling and cross tabs that he can’t read, after watching Biden go with that ridiculous speech, militaristic speech, calling every Trump voter in this country ‘a threat to democracy’ and then having to walk that back the next day,” said Maguire.

“That’s just how slapdash their messaging really is,” Maguire added.

The day after his speech, Biden appeared to walk back on his messaging. “I don’t consider any Trump supporters a threat to the country,” he said on Sept. 2. “I do think anyone who calls for the use of violence, refuses to acknowledge an election … changing the way you count votes, that is a threat to democracy.”

Whatever the merits of drawing Trump into the midterms, Marsh for one, said that the strategy isn’t working.

“I think the 2022 midterms will be a huge win for Republicans,” Marsh said, citing real fear about the use of law enforcement in political brawls as one under-credited strength of the GOP this fall.

“I think that’s frightening to a lot of working people out there and the only question I have is whether Republicans have the spokespeople to convey the message articulately enough and compellingly enough to make this into something more than just a temporary win,” Marsh concluded.