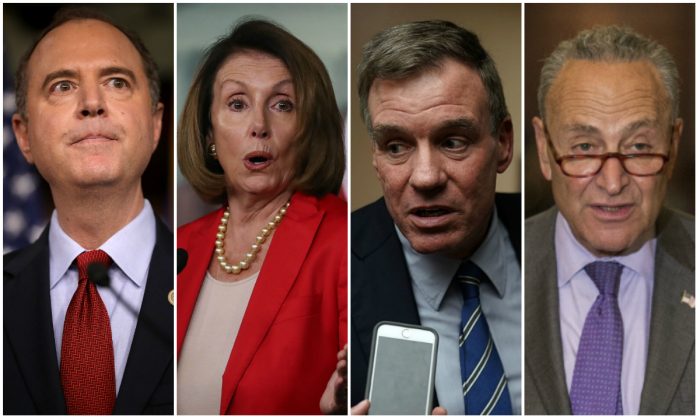 Four top Democratic lawmakers are demanding that no Russia-probe documents be released in compliance with President Donald Trump’s order until the director of national intelligence and the heads of the FBI and the Justice Department meet with the “Gang of Eight.”

In a letter sent one day after Trump ordered the declassifications, Sens. Chuck Schumer (D-N.Y.) and Mark Warner (D-Va.), and Reps. Adam Schiff (D-Calif.) and Nancy Pelosi (D-Calif.) also called Sept. 18 on the three agencies to cease the declassification review process and halt all communications with the White House related to the president’s order until meeting in person with the Gang of Eight.

Trump specified that the documents be declassified “immediately.” The Democrats’ move could at best delay the process, since Trump holds the ultimate authority to declassify documents.

The Democrats argue that the White House shouldn’t be given access to the documents because the Russia investigation is still ongoing and may “implicate the President himself or those around him.” According to the letter, the Democrats had sought to restrict the president’s access to information at least three times since June.

At the requested meeting, Pelosi, Schumer, Schiff, and Warner demand to know how much the White House will get to see as part of the review process, the White House staff who are involved, what information the agencies propose to redact, how they plan to protect sources and methods, and if there is a plan to “mitigate harm” that may result from the release of the documents.

“The action he has taken, to direct your agencies to selectively disclose classified information that he believes he can manipulate publicly, to undermine the legitimacy and credibility of the Special Counsel’s investigation, is a brazen abuse of power,” the Democrats’ letter states.

Spokespeople from the Justice Department (DOJ) and the Office of the Director of National Intelligence (ODNI) told The Epoch Times that those agencies are cooperating with the FBI to comply with Trump’s order.

“When the President issues such an order, it triggers a declassification review process that is conducted by various agencies within the intelligence community, in conjunction with the White House counsel, to seek to ensure the safety of America’s national security interests,” according to a DOJ spokesperson, who declined to comment on the Democrats’ request for a meeting.

“As requested by the White House, the ODNI is working expeditiously with our interagency partners to conduct a declassification review of the documents the President has identified for declassification,” ODNI spokesperson Kellie Wade said.

The FBI declined to comment on the declassification process and the Democrats’ request. Spokespeople for two of the Gang of Eight’s Republican members, Rep. Devin Nunes of California and Sen. Richard Burr of North Carolina, declined to comment.

The documents Trump ordered to be released focus on the key players in the FBI’s counterintelligence investigation of the Trump campaign, which started in July 2016. The roots and methods of that investigation have faced intense criticism because of its reliance on an opposition research dossier funded by the Hillary Clinton campaign and the Democratic National Committee and the intense anti-Trump bias expressed by Lisa Page and Strzok, among others.

Trump told Hill TV in an exclusive interview on Sept. 18 that exposing the FBI’s scheme would be a “crowning achievement” of his presidency.

“I hope to be able to call this, along with tax cuts and regulation and all the things I’ve done … in its own way, this might be the most important thing because this was corrupt,” Trump said.

“They know this is one of the great scandals in the history of our country because basically what they did is, they used Carter Page, who nobody even knew, who I feel very badly for, I think he’s been treated very badly,” the president added. “They used Carter Page as a foil in order to surveil a candidate for the presidency of the United States.”

Trump said that he hadn’t read the material he ordered to be declassified, but that he believes they will expose that the probe of his campaign was a “hoax, beyond a witch hunt.”

The president was specifically concerned with the secret court judges who approved the warrant to spy on Carter Page. The Foreign Intelligence Surveillance Court approved the initial application to surveil Page in October 2016. The court then approved three renewals in three-month increments.

“One of the things I’m disappointed in is that the judges in FISA didn’t, don’t seem to have done anything about it. I’m very disappointed in that,” Trump said. “Now, I may be wrong because, maybe as we sit here and talk, maybe they’re well into it. We just don’t know that because I purposely have not chosen to get involved.”

Trump noted that many people had asked him to declassify the documents, but said he waited to see “where it was all going.”

“All I want to do is be transparent,” he said. “I hope to be able put this up as one of my crowning achievements that I was able to … expose something that is truly a cancer in our country.”