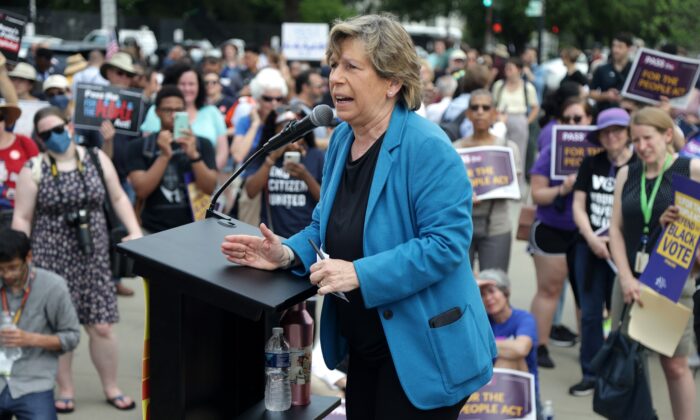 Randi Weingarten, president of the American Federation of Teachers, speaks during a rally in front of the U.S. Supreme Court June 9, 2021 in Washington. People For the American Way (PFAW) and the Declaration for American Democracy coalition held a rally to call on the Senate to approve the For the People Act. (Photo by Alex Wong/Getty Images)
Congress

Unions are among the largest beneficiaries of President Joe Biden’s $3.5 trillion “Build Back Better” spending plan that has united Republican opposition while splitting Democrats in Congress during nearly round-the-clock negotiations seeking sufficient votes for the legislation’s approval.

In the House of Representatives, Speaker of the House Nancy Pelosi (D-Calif.) faces warring moderate and progressive factions, each of whom are threatening to sink the reconciliation measure if fundamental changes aren’t made. Every change, though, risks reducing support from one faction or the other.

Schumer must keep all of his 49 Democratic colleagues on board with the legislation and hope for help from the Republican side. Pelosi only has a razor-thin majority and can afford to lose no more than a handful of Democrats in the House.

The reconciliation package is full of provisions favored by labor unions, which are traditionally among the party’s most generous and reliable sources of contributions and campaign workers.

The pro-labor provisions are in the measure because, as American Federation of Teachers President Randi Weingarten recently told Politico, “labor helped craft it.” A spokesman for Weingarten didn’t respond to a request for additional comment by press time.

But long-time labor-management analyst James Sherk of the Institute for the American Worker, in an analysis released earlier this week, pointed to eight provisions of the reconciliation measure that he believes “will severely undermine worker freedom.”

Sherk, who was President Donald Trump’s chief labor policy adviser for nearly four years, wrote in the analysis that the legislation would “push” laborers into joining unions.

“There is nothing wrong with higher union membership when workers freely choose it,” he wrote. “Federal law gives private-sector workers the right to join a union or refrain from doing so.

“Unfortunately, many provisions in the reconciliation bill are designed to push workers into unions, rather than leaving the choice in their hands. Other provisions would boost union organizing in the short term, while making unionized companies less competitive over the long term.”

Only 6 percent of all private-sector workers are union members—versus more than 30 percent in the public sector—so union leaders are counting heavily on the reconciliation bill. Among the proposal’s more than 2,400 pages are these items, according to Sherk:

Internet voting on proposals to unionize a company: The National Labor Relations Board (NLRB) proposed to authorize electronic voting by workers on unionization proposals in 2010. However, Congress banned electronic voting in 2011 for fear that such a system would severely damage the independence and privacy rights of employees. The reconciliation measure allocates $5 million toward and requires the NLRB to proceed with “the implementation of systems to conduct electronic voting for union representation elections.”

Expands the definition of Unfair Labor Practices imposes steep fines on the company and its officers: Sherk contended that “since federal labor law is highly complex, this will expose many employers—especially small businesses—to potentially crippling fines for inadvertent violations.”

Tax credit for buyers of union-made electric vehicles (EV): The reconciliation measure provides a $4,500 federal tax credit for buyers of EVs produced by unionized companies. “This discriminates against employees on the basis of how they exercise their freedom of association, and encourages employers to deny their employees a secret ballot election before unionizing,” Sherk wrote.

Bans class-action arbitration to settle union disputes: “Arbitration is faster and less expensive than litigation, and also generates far fewer attorney fees. This provision will prevent employees from using an effective and efficient mechanism for redressing their rights, while creating opportunities for trial lawyers,” Sherk wrote. Trial lawyers are among the biggest funders of Democratic candidates.

Prohibits permanent replacement workers: This provision is somewhat puzzling, according to Sherk, because “in the long term, it seems likely to lead unions to negotiate contracts that put unionized employers at a competitive disadvantage,” thus eliminating jobs.

Mark Mix, president of the National Right to Work Legal Defense Foundation, told The Epoch Times on Sept. 30 that the reconciliation measure “is full of union boss giveaways that only serve to magnify union bosses’ stranglehold on workers’ freedom, the economy, and our political system.

“Some of the most egregious inclusions are a ‘tax credit’ conditioned on funding union political spending, one-sided penalties that let NLRB bureaucrats bully employers who refuse to hand over workers for union control, and a UAW chief-crafted tax provision that discriminates against American electric car manufacturers whose workers oppose union affiliation,” Mix said.

A spokesman for House Education and Labor Committee Chairman Bobby Scott (D-Va.) didn’t respond to a request for comment by press time. After the committee approved its markup of the labor provisions of the reconciliation measure, Scott barely alluded to them in a statement, lauding “increased enforcement of labor law and civil rights violations, and set meaningful civil monetary penalties for violations of wage and hour, worker safety, and labor laws.”

Jessica Anderson, executive director of Heritage Action for America, singled out the provision barring staff meetings to discuss unionization and told The Epoch Times that “while small business owners struggle to survive the disastrous left-wing economic agenda, the bill would prevent them from meeting with their workforce to discuss the effects of unionization and fine employers up to $100,000 for each violation.”

“Every senator should oppose this backdoor union boss bailout.”