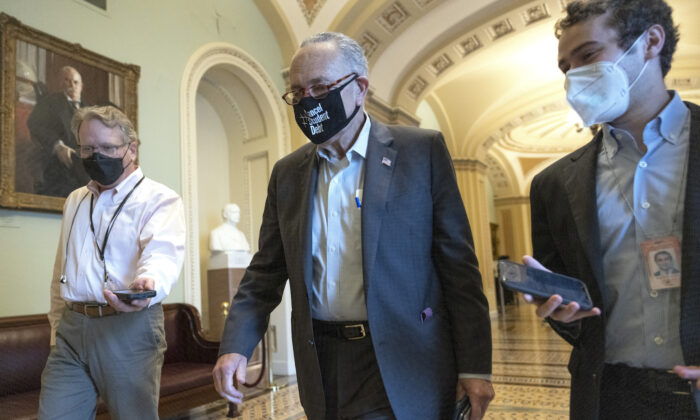 A Democrat-driven bill to address the ongoing baby formula shortage by granting around $28 million to the Food and Drug Administration (FDA) is likely to face hurdles in the Senate, where Republicans have expressed concerns that the bill won’t do much to improve the situation.

Though the White House and FDA have attempted to curtail the shortages, photos have continued to circulate on the internet showing whole aisles empty of baby formula.

On May 16, the FDA and Abbott, one of the largest producers of baby formula in the United States, reached a deal with the FDA that would allow Abbott to reopen a currently-closed baby formula production plant. The plant was shuttered in February after several infants allegedly died from formula produced at the plant; Abbot, however, has rejected the claim.

In addition, President Joe Biden and the FDA have taken steps to allow for more imports of foreign-produced baby formula to enter the country.

“The FDA expects that the measures and steps it’s taking with infant formula manufacturers and others will mean more and more supply is on the way or on store shelves moving forward,” FDA Commissioner Robert Califf told reporters.

On May 17, Democrats in the House introduced the $28 million legislation in order to further reduce the shortages across the nation.

Specifically, the funds in the bill, according to House Appropriations Committee Chairwoman Rosa DeLauro (D-Conn.), would help to restore a steady supply of baby formula consistent with existing FDA standards.

The funds would be used to increase staffing at the FDA with a targeted focus on boosting inspections to help more formula enter the market and to prevent fraudulent or subpar products from making it to grocery store shelves, among other appropriations.

“The stories of mothers and fathers struggling to find formula and the images of empty store shelves are heartbreaking,” DeLauro said. “Parents and caretakers across the country cannot wait. They need our support now.”

The House later passed the legislation over the objections of 192 Republicans, comprising almost every Republican member of the House—suggesting that the bill is unacceptable to broad swaths of the party, a trend that could play out in the Senate’s vote on the bill.

In the Senate, where bills must overcome a 60-vote threshold before they can come to the floor for a simple majority floor vote, the bill may be in trouble.

Sen. Richard Shelby (Ala.), ranking member on the Senate Appropriations Committee, expressed doubt on Thursday that the bill would win enough backing from Republicans to pass.

In comments to another news outlet, Sen. Roy Blunt (R-Mo.) said ambivalently that the bill “may or may not serve to solve some long-term problems at FDA.”

Blunt also suggested that it may have little impact in “upcoming weeks for people who need baby formula.”

Several Republicans in both the House and the Senate have suggested that the bill’s plan to fatten the FDA’s funding would fail to get at the root of the problem.

Without the support of at least 10 GOP senators—a tall order if Senate Republicans are as opposed to the bill as their House counterparts—the bill will be unable to pass.

But Democrats, and the White House, are desperate to be seen doing something as the shortages continue, and some have expressed frustration with GOP opponents to the bill.

“I hear them [Republicans] all trying to blame Joe Biden for baby formula shortage, acting as if they’re compassionate,” said Sen. Tim Kaine (D-Va.). “Well, we’ll give them a chance to show if they care about moms and kids.”

Last week, the House and Senate swiftly passed legislation to loosen restrictions on the Women’s, Infants, and Children welfare program to bolster the program against future crises.

The Biden administration has also held ongoing negotiations to consider increasing imports of foreign-made baby formula into the United States.

At the same time some Democrats, including Speaker of the House Nancy Pelosi (D-Calif.) have suggested that About Nutrition should face indictment and criminal proceedings over the still-disputed claim that their formula was responsible for the deaths of several infants.