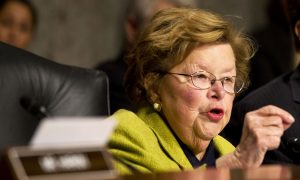 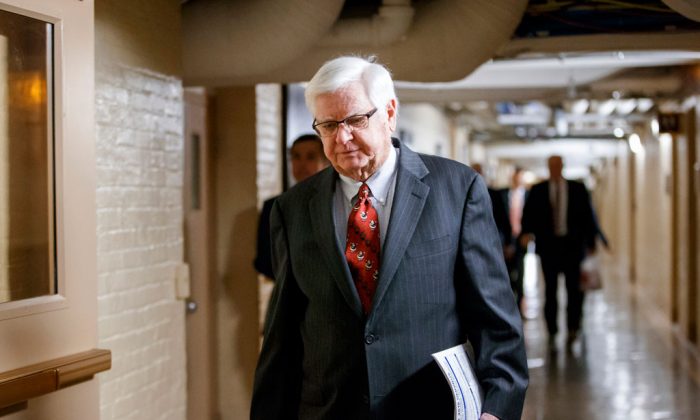 House Appropriations Committee Chairman Rep. Hal Rogers (R-Ky.) walks through a basement corridor on Capitol Hill in Washington, Wednesday, Dec. 9, 2014, on the way to a House Republican Conference meeting. With time running short before Congress adjourns, Republicans and Democrats agreed Tuesday on a $1.1 trillion spending bill to avoid a government shutdown and delay a politically-charged struggle over President Barack Obama's new immigration policy until the new year. Rogers said the measure "will allow us to fulfill our constitutional duty to responsibly fund the federal government and avoid a shutdown." (AP Photo/J. Scott Applewhite)
Politics

WASHINGTON—Democratic support for a huge, $1.1 trillion spending bill funding every corner of government faded Wednesday as liberal lawmakers erupted over a provision that weakens the regulation of risky financial instruments and another that allows more money to flood into political parties.

At the same time, conservatives are unhappy that the bill fails to challenge President Barack Obama’s immigration policy.

The measure took a blow when House Democratic Leader Nancy Pelosi, D-Calif., issued a statement demanding that the changes to 2010 Dodd-Frank regulation of complex financial instruments known as derivatives and a provision sharply hiking limits on donations to political parties be taken out of the bill. Her support, and the votes of her Democratic colleagues, is crucial to passing the measure.

A spokesman for House Speaker John Boehner, R-Ohio, said the provisions were part of bipartisan trade-offs and said they would remain in the bill.

The 1,603-page measure was unveiled late Tuesday and its provisions will be scrutinized in advance of a House vote Thursday. It’s unclear how shaky the bipartisan coalition backing it is, but the alternative is to keep the government running on autopilot until Republicans seize full control of Congress next year.

Nonetheless, top Democrats were lining up to vote against the measure.

“I’m not going to support it. I’ve already found lots of provisions that are against the public interest,” said Rep. Chris Van Hollen, D-Md. “I find it surprising that some people are threatening to shut down the government in order to extract big benefits for big banks at the expense of consumers and taxpayers.”

Conservatives were angry, too.

The measure adheres to tight budget caps negotiated previously between the White House and Republicans, freezing agency budgets, on average. It also includes several provisions to fulfill Republican policy objectives, including significantly weakening new regulations that require banks to set up separate affiliates to deal in the more exotic and riskier forms of complex financial instruments called swaps. But some top Democrats, including Appropriations Committee member Nita Lowey of New York, supported the provision, and party leaders didn’t appear to try too hard to knock it out.

The measure is laced with trade-offs. Democrats won budget increases for the Securities and Exchange Commission and the Commodity Futures Trading Commission; Republicans won a big cut to the Internal Revenue Service budget and a smaller cut to the Environmental Protection Agency.

Democrats blocked the most ambitious attempts by Republicans to thwart Obama administration regulations on greenhouse gas emissions blamed for global warming, and on clean water; Republicans won a new concession exempting many agricultural projects from clean water rules and an old one boosting exports of coal mine equipment.

The compromise spending bill would permit virtually the entire government to operate normally through the Sept. 30, 2015, end of the fiscal year, with the exception of the Homeland Security Department.

Funds for that one agency will run out again on Feb. 27, when Republicans are expected to try to use the expiration as leverage to force Obama to roll back a decision suspending the threat of deportation for an estimated 5 million immigrants living in the country illegally, while providing work permits and eventually making them eligible for benefit programs such as Social Security and Medicare.

Boehner told fellow Republicans at a Wednesday morning party meeting that the immigration “fight will be done at the end of February when the troops, when the cavalry comes,” a reference to the looming GOP takeover of the Senate. A fight now could have led to a stalemate with Obama and a government shutdown.

GOP leaders distributed a lengthy roster claiming wins on spending cuts and policy and claimed significant support among the rank and file.

“I think we won on policy, the budget numbers are lower than I ever thought it would be,” said Rep. Richard Hudson, R-N.C.

The overall spending measure reaches into every corner of government, from a provision to ease standards on school meals that were supposed to go into effect in 2017 to funds to restore the iconic Capitol Dome.

Proponents of campaign finance reforms decried a provision slipped in at the last minute that would sharply increase limits on the amount that an individual may contribute to various national political party accounts each year. Those limits would rise from $32,400 to $324,000 for donations to finance parties’ national conventions, election recounts and headquarters buildings. That means individuals could give $648,000 in a two-year campaign cycle, with a married couple capped at almost $1.3 million for an election cycle.

“It is only millionaires and billionaires who can give these huge, corrupting contributions,” said campaign finance activist Fred Wertheimer, president of Democracy 21.

Another provision drawing fire would allow pensions to be cut for current retirees covered by some economically-distressed multiemployer plans, part of a package agreed to unexpectedly Tuesday after secretive talks.