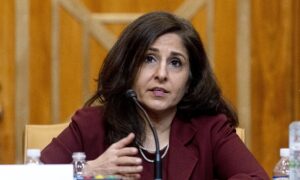 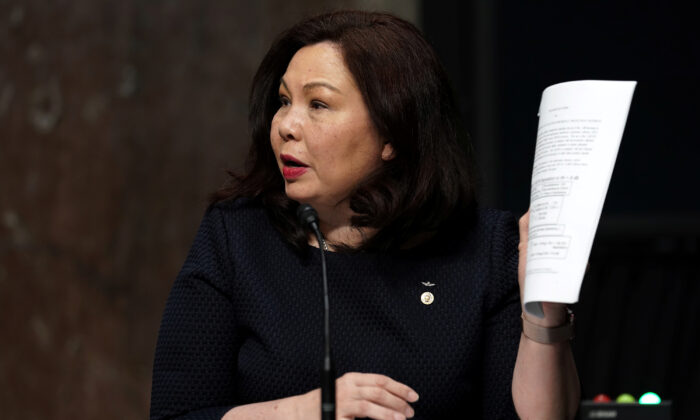 Sen. Tammy Duckworth (D-Ill.) during a hearing on Capitol Hill in Washington on May 6, 2020. (Greg Nash/Pool/Reuters)
Democrats

Senators Tammy Duckworth (D-Ill.) and Mazie Hirono (D-Hawaii) backtracked after saying that they would vote no for President Joe Biden’s future nominees, except for diversity nominees, because of the lack of Asian American representation in the cabinet.

Duckworth’s spokesman said in a statement obtained by NBC News that the senator “appreciates the Biden administration’s assurances that it will do much more to elevate AAPI voices and perspectives at the highest levels of government.”

“Accordingly, she will not stand in the way of President Biden’s qualified nominees—which will include more AAPI leaders,” the statement reads.

Hirono on Twitter announced, “I welcome the appointment of a senior level White House liaison to the AAPI community to further strengthen our voice.”

She added, “I had a productive conversation with the White House today to make clear my perspective about the importance of diversity in the President’s cabinet.”

According to a CNN reporter, White House press secretary Jen Psaki said that the White House will add a senior AAPI liaison “who will ensure the community’s voice is further represented and heard.”

“The President has made it clear that his Administration will reflect the diversity of the country,” Psaki said, according to CNN.

Earlier on Tuesday before backtracking on her threat to oppose Biden nominees, Duckworth, a Thai-American, told reporters that it was “not acceptable” that there was “no AAPI representation in the cabinet.”

“There’s not a single AAPI in the cabinet position,” she repeated.

“President Biden will be the first President in 20 years without a cabinet secretary who is AAPI,” Duckworth added.

However, Duckworth acknowledged that Katherine Tsai, the recently confirmed U.S. Trade Representative, is at cabinet-level because she “sit[s] around the table.”

Sen. Hirono, a Japanese-born American, had earlier expressed agreement with Duckworth’s position. She told a reporter on Capitol Hill on Tuesday, “I’m joining Tammy in her … position that we’d like the see the White House make a commitment to more diversity representation in the Cabinet as well as senior White House positions. And until that commitment comes, we will not be voting for any non-diverse nominees.”

“This is not about pitting one diversity group against another by the way. So I am happy to vote for Hispanics, Blacks, LGBTQ, AAPI, and not pushing for particular candidate,” she said, later adding, “One of the things that [Biden] did say though is that he made a commitment to have as diverse a Cabinet as possible. And I would like him to live up to that.”

Currently, Duckworth and Sen. Mazie Hirono (D-Hawaii) are the only two Asian Americans in the Senate. In an equally split Senate (50-50), their votes could be critical.

“That is not something you would say to the Black Caucus: ‘Well, you have Kamala—we’re not going to put any more African Americans in the Cabinet because you have Kamala.’ Why would you say it to AAPI?” she asked.

“At this point, they can call me and tell me what the proposal is,” Duckworth continued. “But until then, I am a ‘no’ vote on the floor, on all non-diversity nominees.”

She suggested that Biden could nominate Asian Americans to head Federal Communications Committee or OBM, or “they could make a commitment for a future cabinet secretary, an actual cabinet secretary.”

Biden’s initial nominee for Office of Management and Budget (OMB) director, Neera Tanden, is an Indian American. Her nomination fell apart when key senators announced they wouldn’t support her due to her past provocative attacks on Republican Senators on Twitter.

Duckworth, like Hirono, clarified that diversity nominees are an exception—she would vote for racial minorities and LGBTQ nominees, but not anybody else.

More than 1,000 positions—mainly heads of agencies and a lot of deputies—require Senate confirmation.

When asked about the matter late Tuesday, prior to the two senators backtracking on their stance, Biden said that the administration has “the most diverse Cabinet in history.”

” We have a lot of Asian Americans who are in the Cabinet and sub-Cabinet levels. Our Cabinet is formed,” he told reporters before boarding Air Force One in Columbus, Ohio.