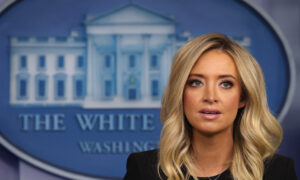 Democratic Senators called for the U.S. Department of Justice’s (DOJ) civil rights division to release a detailed plan to address coronavirus-related hate crimes and discrimination against Asian-Americans and Pacific Islanders.

U.S. Senators Jack Reed (D-R.I.) and Sheldon Whitehouse (D-R.I.), along with Senators Mazie K. Hirono (D-Hawaii), Cory Booker (D-N.J.), and 12 other senators sent a letter to the Assistant Attorney General Eric Dreiband, expressing their “deep concern” and asking the administration to implement a clear plan to protect Asian Americans from discrimination and attacks due to the pandemic.

“It is critical that the Civil Rights Division ensure that the civil and constitutional rights of all Americans are protected during this pandemic,” the 16 senators wrote.

The senators said the Federal Bureau of Investigation (FBI) concluded that ‘“hate crime incidents against Asian Americans likely will surge across the United States, due to the spread of coronavirus disease … endangering Asian American communities.”’

The senators said that reports of discrimination against Asians have increased since the pandemic began.

University of Southern California’s Dornsife Center for Economic and Social Research (CESR) survey showed that 14 percent of Asians are “more likely to experience at least one form of discrimination and unfair treatment due to other people thinking they might have the coronavirus,” as compared to whites at 4 percent and Hispanics and 6 percent.

President Trump has spoken out strongly against any discrimination toward Asians-Americans.

“It seems that there could be a little bit of nasty language toward the Asian-Americans in our country and I don’t like that at all. … they are making statements to great American citizens that happened to be of Asian heritage. And I’m not going to let that happen,” at the March 23 press briefing.

The Center for Disease Control (CDC) put out a warning that Asians and other groups may be more vulnerable to discrimination during the pandemic.

According to the CDC, some groups who may experience stigma because of COVID-19 include persons of Asian descent, those who have traveled, emergency responders, and healthcare professionals.

The senators asked DOJ to take concrete action to prevent discrimination against Asian-Americans.

The lawmakers urged the department to designate an official who would be charged with reviewing discrimination cases related to COVID 19 against Asians, who would then report the detailed summary of those cases to congress on a monthly basis.

The lawmakers also called for outreach and education to prevent discrimination during this pandemic.

“We also request that the Civil Rights Division respond by May 15, 2020, to inform Congress what steps the Division has taken in response to the jump in anti-Asian discrimination and hate crimes since the COVID-19 outbreak began,” the senators wrote.

President Trump made it clear that no discrimination against Asians is tolerable.

“It is very important that we totally protect our Asian American community in the United States, and all around the world. They are amazing people and the spreading of the Virus is NOT their fault in any way, shape, or form. They are working closely with us to get rid of it. WE WILL PREVAIL TOGETHER!” President Trump wrote in a March 23 Twitter entry.