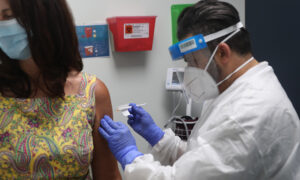 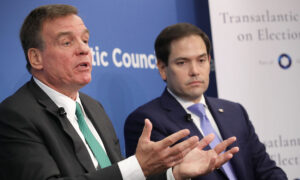 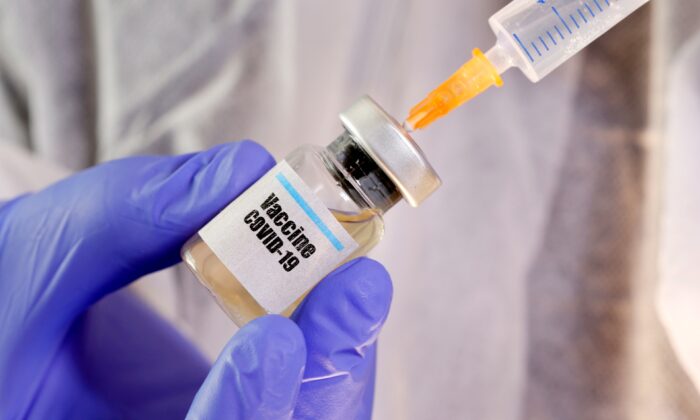 A woman holds a small bottle labeled with a "Vaccine COVID-19" sticker and a medical syringe in this illustration taken on April 10, 2020. (Dado Ruvic/Illustration/Reuters)
AMERICA

The Democrat nominee for a U.S. Senate seat representing North Carolina said he would hesitate to take a vaccine against COVID-19, which is caused by the CCP (Chinese Communist Party) virus.

“Yes, I would be hesitant,” Cal Cunningham said during a debate Monday against incumbent Sen. Thom Tillis (R-N.C.).

“But I’m going to ask a lot of questions. I think that is incumbent on all of us right now, in this environment, with the way we’ve seen politics intervening in Washington,” he added.

Cunningham said he supports the Food and Drug Administration (FDA), the agency in charge of approving vaccines, but added that he’s seen “an extraordinary corruption in Washington.”

Trump administration officials have said they’re not being pushed to develop a vaccine, including Dr. Anthony Fauci, the head of the National Institute of Allergy and Infectious Diseases.

“We just heard a candidate for the U.S. Senate look into the camera and tell 10 million North Carolinians he would be hesitant to take a vaccine. I think that that’s irresponsible,” he said. “We are not going to release a vaccine that doesn’t have the effectiveness and safety that the gold standard of the FDA requires.”

In a statement after the debate, he added, “While Cal Cunningham is fueling conspiracy theories to disrupt public trust in our nation’s greatest weapon in fighting COVID-19—a safe vaccine—thousands of North Carolinians are asking: why would Cunningham play politics with a pandemic?”

“There are scientists up and down the U.S. government who have put their name by this vaccine process—one of whom is Dr. Fauci. This is indefensible,” Williamson said on social media.

Pressed on his stance by reporters, Cunningham told them: “If public health professionals sign off, then I will not hesitate and I would encourage others to do so.”

Tillis said he’d have “no doubt” that a vaccine that got approved would be safe.

Sen. Kamala Harris (D-Calif.) suggested earlier this month that she wouldn’t take a vaccine approved before the Nov. 3 election. A senior adviser to Democratic presidential nominee Joe Biden’s campaign refused the next day to say Biden would take a vaccine if one became available. Biden later told a crowd that he would take a vaccine, if it was approved by scientists.

President Donald Trump called on both to apologize for what he described as “reckless anti-vaccine rhetoric.”

FDA head Stephen Hahn told the Financial Times last month that his agency could approve a vaccine before Phase Three clinical trials are completed, if officials believe the benefits outweighed the risks.

“It is up to the sponsor [vaccine developer] to apply for authorization or approval, and we make an adjudication of their application,” the doctor said. “If they do that before the end of Phase Three, we may find that appropriate. We may find that inappropriate, we will make a determination.”

Just 51 percent told Morning Consult this month that they’d take a vaccine if one became available, a drop from 72 percent in April.

More Democrats than Republicans said they’d take a vaccine, and more Americans older then 64 said they would do so, when compared to other age groups.

The poll of 2,200 adults was conducted online from Sept. 2 to Sept. 6 and has a margin of error of plus or minus 2 percentage points.