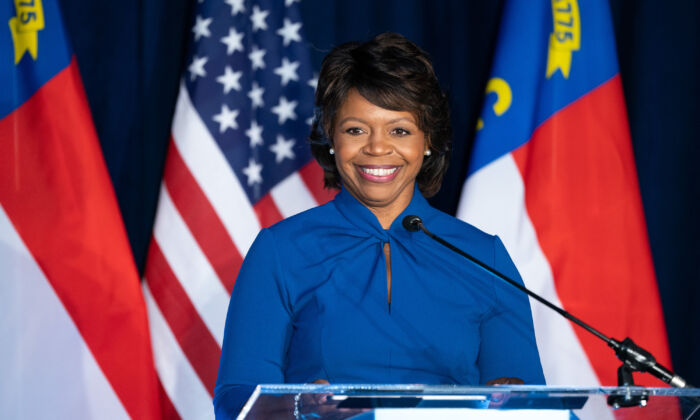 Democratic Senate candidates from Florida, North Carolina, Ohio, Pennsylvania, and Wisconsin have joined forces to pool donations in the “Flippable Five Fund” in a bid to win seats in November.

The 50–50 split between Republicans and Democrats in the U.S. Senate “is not cutting it,” according to Democratic Senate candidate Cheri Beasley, North Carolina’s former Supreme Court chief justice.

The tiebreaking vote of Vice President Kamala Harris currently gives Democrats a slim majority in the Senate. But Beasley and her colleagues want to win more seats, and they say the joint fund is “Democrats’ best chance” come the November midterms.

The Democratic candidates headlined their political platforms on Twitter and called for donations to the fund.

“Reproductive rights. Marriage equality. Middle class tax cut. Everything is on the line,” Barnes said, adding: “Send us to DC, and we’ll fix our broken Senate and get to work.”

Demings will face incumbent Republican Sen. Marco Rubio after she won the Florida Democratic Senate primary on Tuesday. The Senate hopeful Democrat has served in the U.S. lower house for Florida’s 10th district since 2017, and was previously chief of police in Orlando.

In Republican-leaning North Carolina, Beasley proved popular with Democrat primary voters, receiving 80 percent of the vote in a 10-candidate race. She faces Republican Rep. Ted Budd who has been endorsed by former President Donald Trump.

Pennsylvania has had a closely-watched primary race between Fetterman and Republican Mehmet Oz to replace retiring Sen. Pat Toomey (R-Pa.). FiveThirtyEight currently forecasts Fetterman as leading at 67 percent, though other polls have him at 50 percent to Oz’s 46.8 percent.

Meanwhile, in Wisconsin, Barnes will face incumbent Sen. Ron Johnson who won the Republican primary on Aug. 9. The Wisconsin Senate race is expected to be tight between Barnes and Johnson. Barnes served two terms in his state’s legislature before being elected Wisconsin’s lieutenant governor in 2018.

Either the Democrats or the Republicans need to gain only one seat in November to win majority control of the Senate. The GOP is expected to pick up as many as three seats in the November midterm elections.