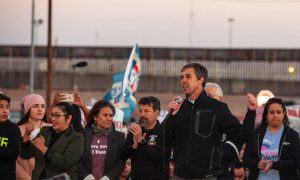 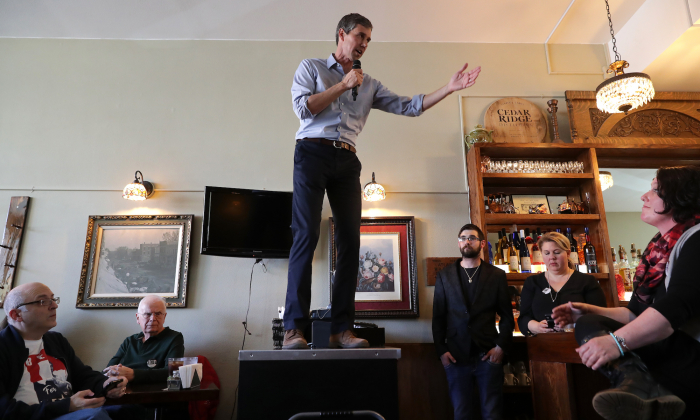 Democratic presidential candidate Beto O'Rourke answers questions from voters during his second day of campaigning for the 2020 nomination at The Sing-A-Long Bar and Grill in Mount Vernon, Iowa, on March 15, 2019.(Chip Somodevilla/Getty Images)
Politics

A woman in the audience asked O’Rourke if he would protect unborn babies considering that third-trimester abortions are not a medical emergency or necessity.

O’Rourke replied: “The question is about abortion and reproductive rights. And, my answer to you is, that should be a decision the woman makes. I trust her.”

Here’s Beto O’Rourke at a campaign event in Cleveland responding to a question about third-trimester abortions: “That should be a decision that the woman makes. I trust her.” pic.twitter.com/nBrlazlMob

As the crowd broke out into loud cheers, O’Rourke quickly took another question.

O’Rourke co-sponsored a bill in Congress in 2017 that would have lifted most state restrictions on abortion.

Americans consistently oppose third-trimester abortions, with at least 80 percent saying it should be illegal, according to every Gallup poll since 1996.

The national discussion about late-term abortion flared recently after a Virginia politician promoted a bill allowing for abortions up to the moment a mother is about to give birth. After a video of the politician defending the bill went viral, Virginia Gov. Ralph Northam went a step further and endorsed the killing of infants after birth.

All of the 2020 presidential candidates in the Senate voted against the Born-Alive Abortion Survivors Protection Act in February, including Bernie Sanders (I-Vt.), Kamala Harris (D-Calif.), Cory Booker (D-N.J.), Kirsten Gillibrand (D-N.Y.), Amy Klobuchar (D-Minn.), and Elizabeth Warren (D-Mass.). The bill would require doctors to provide the same level of care to infants who survived an abortion as they would to other infants. All but one Democrat voted against the bill.

“Senate Democrats just voted against legislation to prevent the killing of newborn infant children. The Democrat position on abortion is now so extreme that they don’t mind executing babies AFTER birth,” President Donald Trump wrote on Twitter on Feb. 25, in response to the vote.

“This will be remembered as one of the most shocking votes in the history of Congress. If there is one thing we should all agree on, it’s protecting the lives of innocent babies,” he said.

O’Rourke entered the 2020 race on March 14. The Texas Democrat gained national attention running and losing a longshot bid for the Senate against Sen. Ted Cruz (R-Texas).

Like most Democratic 2020 candidates, O’Rourke embraces the socialist “Medicare for All” and Green New Deal policies. Unlike most of the Democrats, O’Rourke has refused to disavow socialism.

Shortly after he announced his run for the White House, O’Rourke’s disturbing teenage writings surfaced in a Reuters report. In one piece, he wrote about killing two children because they were “happy” and the happiness belonged to him. By the end of the story, O’Rourke wrote about killing 38 people. He has since apologized for the writings.

Despite trailing in the polls, O’Rourke raised more than $6.1 million within 24 hours of announcing his candidacy, his campaign said on March 18, highlighting his fundraising prowess in a crowded field.

The former three-term Texas congressman’s haul put him at the top of a Democratic pack of more than a dozen candidates so far including Bernie Sanders who raised $5.9 million in the first 24 hours of his 2020 campaign.