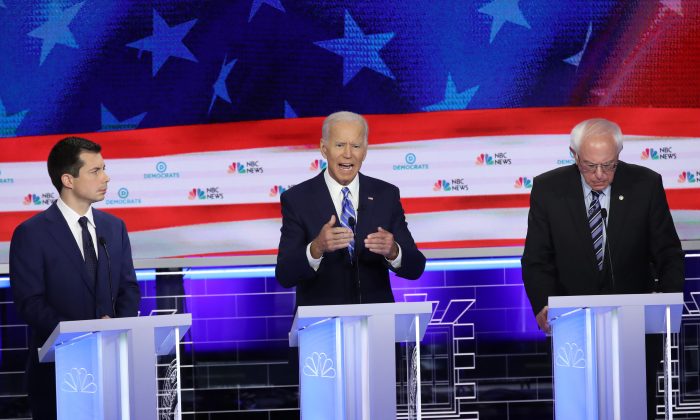 None of the leading Democratic presidential candidates have committed to immediately drop President Donald Trump’s tariffs on China if they win the election, as the ongoing trade dispute shows no signs of being resolved any time soon.

Trump on July 26 suggested that the Chinese regime may not sign a deal before November 2020 in hopes that a Democrat who will be easier to deal with will win.

He said the Chinese leadership is probably thinking, “Maybe we can deal with another dope or another stiff” instead of him.

All of the candidates condemned China’s unfair trade practices, such as theft of U.S. intellectual property and forced a transfer of technology as a condition of doing business in China, and spoke of the need for the United States to respond to such economic aggression.

Lawmakers from both sides of the aisle have roundly criticized the regime’s longstanding trade abuses. The Trump administration is pushing for the Chinese regime to address such issues in ongoing trade discussions.

The two countries are set to conduct face-to-face talks in Shanghai, China starting on July 30, the first in-person negotiations since trade talks broke down in early May.

U.S. officials has said the two sides were 90 percent of the way towards a trade deal before the regime reneged on agreed-upon provisions relating to instituting law reform to deal with core U.S. concerns over its unfair practices.

White House economic adviser Larry Kudlow said on July 26 he does not expect a grand deal from next week’s trade talks with China but U.S. negotiators hoped to reset the stage for further productive talks on reducing trade barriers.

“They’re going to meet next week in Shanghai,” Kudlow said in an interview with CNBC. “I wouldn’t expect any grand deal. I think, talking to our negotiators, they’re going to kind of reset the stage and hopefully go back to where the talks left off last May.”

“We were doing well. No deal yet, but still on the structural issues, regarding IP (intellectual property) theft, forced a transfer of technology, cyber interference, trade and non-trade, tariff barriers and so forth, certainly the enforcement mechanisms,” Kudlow added. “But if we were 90 percent there with 10 percent to go … I think our negotiators want to go back to that spot.”