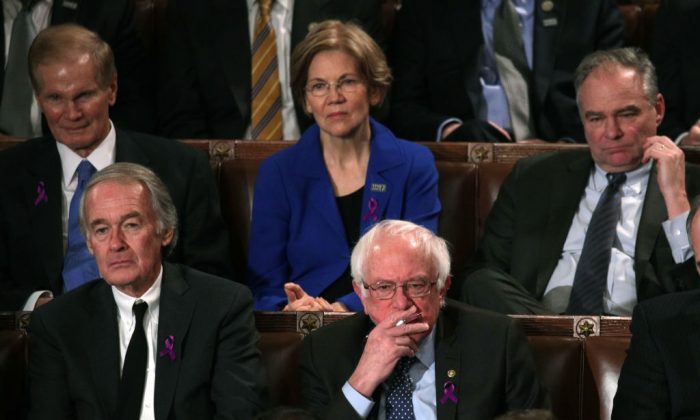 Sens. Elizabeth Warren (D-Mass.) and Bernie Sanders (I-VT) (C) watch during the State of the Union address in the chamber of the U.S. House of Representatives in Washington, on Jan. 30, 2018. (Alex Wong/Getty Images)
Politics

WASHINGTON—Democratic presidential candidates Sens. Elizabeth Warren (D-Mass.) and Bernie Sanders (I-Vt.) in recent weeks have stepped up their attacks on the private equity industry that supports millions of American jobs.

Warren on July 18 laid out a detailed plan on how to rein in the private equity industry, calling it “the poster child for financial firms that suck value out of the economy.”

Private equity funds directly invest in private firms or buy out public companies and take them private. This allows companies to access capital as an alternative to conventional loans or listing on public markets.

Both Warren and Sanders have been vocal critics of Wall Street and the private equity industry.

Warren’s proposal on private equity came a few days after Sanders joined a protest in Philadelphia over the planned closure of Hahnemann University Hospital, which is owned by a private equity firm. The hospital, which serves low-income patients, has more than 2,500 employees, according to Pitchbook, a financial data company.

Los Angeles-based investor Joel Freedman and his private equity firm, Paladin Healthcare, came under fire when Freedman announced his plan to close the loss-making hospital and transfer its real estate to another entity.

“We must ban private equity funds and Wall Street vulture funds from owning hospitals,” Sanders wrote on Twitter on July 15.

A private equity fund typically exits (sells) investment in five to seven years. Since these funds are short-term investors, they are criticized for focusing on immediate profits rather than the long-term performance of a company and its employees.

“Private equity firms raise money from investors, kick in a little of their own, and then borrow tons more to buy other companies,” Warren wrote in a Medium post.

“Sometimes, the companies do well. But far too often, the private equity firms are like vampires—bleeding the company dry and walking away enriched even as the company succumbs.”

The managers of many private equity firms receive a management fee, typically 2 percent annually on the invested capital and 20 percent of the profits gained from the sale of a company.

Warren’s proposals came as a response to a series of high-profile failures in the retail industry including Toys “R” Us, Sears Holding, Payless Shoes, and Radio Shack—all owned or controlled by private equity firms.

She describes the sector as “legalized looting” and accused it of making “a handful of Wall Street managers very rich while costing thousands of people their jobs, putting valuable companies out of business, and hurting communities across the country.”

According to critics, Warren’s plan has good aims, but fails to achieve the intended result.

“As with many of the other economic policies proposed by the Massachusetts senator, this one suffers from overreaching and being cloaked in overwrought populist rhetoric,” Steven Pearlstein, a Washington Post columnist and professor of public affairs at George Mason University, wrote in his column.

Warren’s proposal “would pretty much guarantee that nobody invests in or lends to private equity firms,” which would kill the sector, he added.

According to the AIC, cherry-picking less than 1 percent of private equity investment is “a shortsighted approach and ignores the industry’s clear record of success.”

“Private equity is an engine for American growth and innovation—especially in Senator Warren’s home state of Massachusetts. Extreme political plans only hurt workers, investment, and our economy,” Drew Maloney, president and CEO of AIC, said in a statement.

According to the advocacy group, the private equity sector funneled $3.4 trillion into U.S. businesses between 2013 and 2018.

In addition, private equity is an asset class in public pension funds, performing better than any other asset class. Over a 10-year term, the funds deliver 8.6 percent annualized return on average.

“These returns crucially support the retirements of schoolteachers, first-responders, and other dedicated public servants nationwide,” the AIC stated.