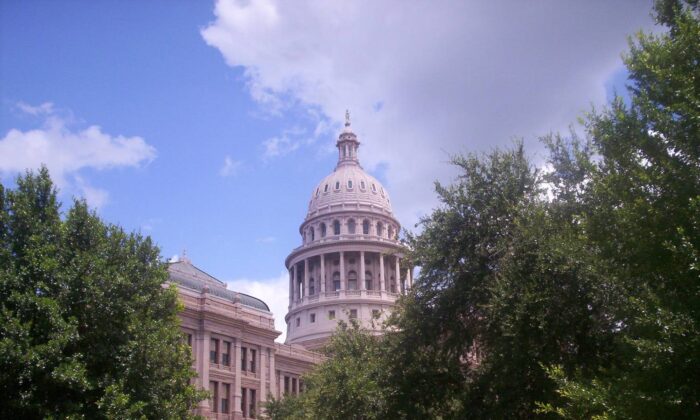 The Texas state Capitol in Austin, Texas on May 30, 2005. (ricraider via Wikimedia Commons)
By Matthew Vadum

The Texas Democratic Party and the party’s campaign arms in the U.S. House and Senate are suing Texas, claiming the state is violating the U.S. Constitution and federal and state law by rejecting voter registration applications that lack an original signature.

Once ruby-red Republican, there are signs that Democrats are making electoral inroads in the state and that it will be an important battleground in this year’s presidential election. President Donald Trump beat Democratic candidate Hillary Clinton in Texas in 2016, winning 52.2 percent of the popular vote there.

The Lone Star State has 38 out of the 270 electoral votes required to win the presidency.

This is the third lawsuit filed by the party, the Democratic Senatorial Campaign Committee (DSCC), and the Democratic Congressional Campaign Committee (DCCC) in the past few months, The Texas Tribune reports. In October 2019, the groups sued to challenge the state’s move to shut down temporary or mobile early voting sites, and the following month, they sued to challenge a state law that gives preferential ballot placement to candidates in the same political party as the sitting governor.

“This challenge and the series of others we’ve taken to end burdens in our voting process reflect our commitment to making sure Texans can make their voices heard,” U.S. Sen. Catherine Cortez Masto of Nevada, head of the DSCC, said in a statement.

As part of a larger push by left-leaning organizations to change the electoral playing field, the super PAC Forward Majority Action is spending $10 million this year in an effort to turn Republican-dominated legislatures in Texas and three other states blue before the electoral redistricting process begins in 2021, as The Epoch Times previously reported.

The legal complaint in the case, cited as Texas Democratic Party v. Hughs, was filed Jan. 6 in U.S. District Court for the Western District of Texas.

According to the complaint, five days before the voter registration deadline for the 2018 midterm election, the Texas Secretary of State instructed county registrars to reject more than 2,400 voter registration applications that were collected and submitted by Vote.org, a third-party organization, in connection with its efforts to expand voter participation and increase turnout in Texas.

The secretary claimed the applications were incomplete because they lacked an original, so-called wet signature, even though Texas law makes no reference to wet signatures and permits voters to register by faxing, and then mailing, a copy of their voter registration application to their county registrar, the complaint states.

At the time, a spokesman for the secretary’s office said voter registration applications submitted through Vote.org weren’t valid in Texas, because state law requires that registrants physically sign their applications before filing them.

“There are very specific codes in the Texas Election Code that authorize digital signatures,” the spokesman told The Rivard Report, a San Antonio-based independent media outlet. But these instances don’t include online registration.

“At a [Department of Public Safety] office when renewing your driver license, the DPS has to inform you the digital signature is used for voter registration,” the spokesman said. “Military and overseas voters also have that option in specific circumstances.”

According to the legal complaint, the decision by the secretary to reject the applications “left thousands of Texas voters scrambling to register to vote before the midterm elections, and many were unable to do so,” violated the Texas Election Code, and “contradicts the State’s longstanding recognition that electronic signatures carry the force of law.”

“This unconstitutional ban does not make an ounce of sense, and it is the kind of arbitrary voter suppression that we’re working to tear down right now before even more harm is done to our Democracy,” said U.S. Rep. Cheri Bustos of Illinois, who chairs the DCCC, in a statement.

As of press time, the office of Texas Secretary of State Ruth R. Hughs, a Republican who is named as defendant in the legal proceeding, didn’t reply to a request by The Epoch Times for comment.