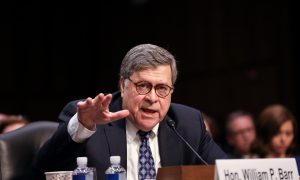 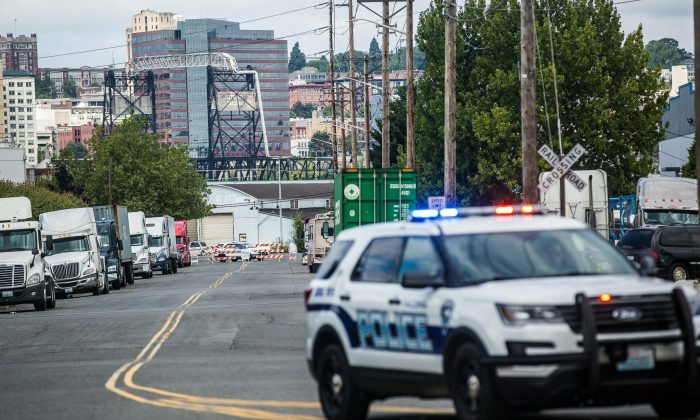 A police officer guards the front of a road block near the Northwest Detention Center in Tacoma, Wash., on July 13, 2019. (Rebekah Welch/The Seattle Times via AP)
Viewpoints

Democratic Party Rhetoric Has Led to Another Domestic Terrorist Attack

A terrorist carried out an attack on a federal building in Tacoma, Washington, on July 13.

Armed with incendiary devices and a rifle, he threw the devices at several cars, setting one on fire, and then attempted to ignite a propane tank before engaging armed officers at the scene and being fatally shot.

Willem Van Spronsen was a known member of the domestic terrorist group Antifa and had appeared in a CNN documentary about the gun-toting extremists. Van Spronsen also left behind a manifesto, which laid out in great detail why he attacked the Tacoma ICE facility and attempted to kill federal agents.

He made it clear that he carried out the attack as a way to protest the U.S. government’s operation of “concentration camps.” If you’ve paid any attention at all to political news for the past month, you would be aware that a member of Congress recently has been making this exact claim. That member of Congress is Rep. Alexandria Ocasio-Cortez (D-N.Y.).

Van Spronsen would go on to rant about “for-profit concentration camps” several times in his rambling and often incoherent manifesto.

Ocasio-Cortez was merely the first to make the incendiary charge that our federal government, border agents, and ICE agents are, in fact, just like the Nazis. This rallying cry was soon adopted by many other top Democrats, much to the horror of regular Americans watching this lunacy unfold.

This isn’t the first time over-the-top, incendiary rhetoric from Democrats has inspired a terrorist attack by a violent extremist.

Two years ago, it was a lunatic with a rifle seeking to murder Republican lawmakers on a baseball field in Virginia, after Democratic lawmakers stridently insisted that by attempting to repeal the “Affordable Care Act,” Republicans were trying to kill sick people.

Sen. Rand Paul (R-Ky.) said only the presence of the Capitol Police officers kept the incident from being a full-scale massacre, as Griner and two other officers assigned to Scalise’s security detail managed to keep Hodgkinson pinned down so he couldn’t advance on his intended victims.

Thankfully, in both of these Democratic-rhetoric-inspired terrorist attacks, it was only the terrorist who ended up dying. But we can’t count on being that lucky in the future, and it’s far past time that Democratic Party leadership accepts responsibility for its rhetoric and tones it down.

Thus far, nobody seems to accept any responsibility for this latest domestic terrorist attack. The media is studiously ignoring the attack because they seem to think Van Spronsen was the “wrong kind” of domestic terrorist.

As far as I can see, Ocasio-Cortez hasn’t made a single public statement about the terrorist attack in Tacoma. So, I have some questions for her:

1. Do you accept any responsibility for what Van Spronsen did in attacking the Tacoma ICE facility?

2. Do you intend to continue calling U.S. border facilities “concentration camps,” now that a domestic terrorist left behind a manifesto in which he used those same words?

3. Are you concerned that another violent extremist might attack a federal building and could succeed in killing federal agents?

The same media and Democrats who have spent the past several decades constantly demanding that conservatives and Republicans be very careful about what they say, lest their words incite violence, seem to genuinely think this is a one-way street.

They’re wrong about that. And Van Spronsen is just the latest example of just how wrong they are.