Democratic Party Is Alienating Its Base, Heading for Trouble in November Midterms, Analysts Say 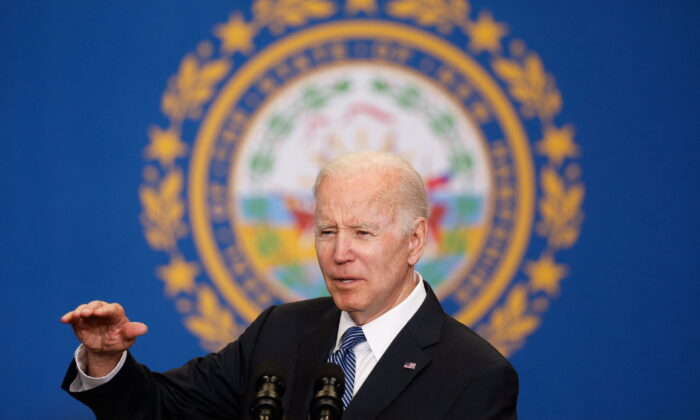 Dismal poll numbers suggesting that a low number of Americans think highly of the job that President Joe Biden is doing—a mere 33 percent of respondents in a Quinnipiac poll last week said they approved—have helped prompt a pivot on Biden’s part toward a greater focus on domestic issues, even as the Ukraine crisis continues to consume much of his attention.

Biden hopes to bolster his party’s image in time for the midterm elections in November. But experts say that an enhanced focus on domestic issues—or the appearance of one—is unlikely to salvage the prospects of the Democratic Party. The party, they say, continues to allow its most radical left-wing elements to shape its policies and stances on the issues of concern to voters, particularly Hispanic voters and others who have long been crucial to the electoral prospects of a party that promotes itself as a champion for working people and diversity.

The same Quinnipiac poll found that within the category of Hispanic voters, Biden’s approval rating is a mere 26 percent. The party depends to a great extent on the Latino vote, and at this juncture, no other demographic gives the current president a lower rating of approval.

Experts say that the Democratic Party’s missteps on immigration, crime, and the economy have eroded its support among the working people that it depends on, and the disenchantment is particularly acute among Hispanic voters.

In the view of Jeronimo Cortina, a professor of political science at the University of Houston, the administration suffers from a perception among Hispanic voters that it hasn’t kept promises and that, in general, it isn’t very good at getting things done.

“Things are not going very well for President Biden, domestically speaking. One of the issues that we have to identify is the current pandemic. A lot of people have been hurt, and Latinos and African Americans have had to look at how it has affected them. And then there are other issues that affect the Latino community, such as the economy, jobs, child care, and education,” Cortina said.

Inflation, fueled by the pandemic and, according to experts, driven partly by the Federal Reserve’s expansionary monetary policy, has had noticeable effects on gas costs and prices at the supermarket. The 8.5 percent jump in the Consumer Price Index over the past year—and particularly the rise in gas prices—hasn’t been lost on Hispanic voters who don’t work remotely and have to divert a certain amount of their income to get to work, Cortina noted.

“Gas prices are pretty high, and you feel [the effects of inflation] at the supermarket as well,” he said. “It’s a global market, it reacts to supply and demand. Biden has done some things to alleviate the price of gas, for example by opening the national reserves and trying to pump more oil, but private companies are ultimately going to decide if it’s in the best interest.”

The lack of speed and efficiency in bringing Biden’s far-reaching domestic spending programs to fruition doesn’t alleviate the frustration that many voters within this ostensible core Democratic constituency are feeling, he said.

The party suffers from a perception that it’s riven with tensions between its moderate elements and its more radical camp. While he acknowledged that there are also tensions in the Republican Party between its more conservative and more centrist wings, Cortina sees the Democrats’ internecine feuds as problematic for a ruling party trying to enact massive domestic spending programs.

A case in point is the failure of Biden’s Build Back Better Act, which was effectively killed in December 2021 when Sen. Joe Manchin (D-W.Va.) voted against it in the evenly divided Senate, arguing that he couldn’t support a $2 trillion spending project as inflation reached a four-decade high. Sen. Kyrsten Sinema (D-Ariz.) also wasn’t fully on board with the legislation.

“I think that domestically speaking, the Biden agenda has not been able to move very fast. With the Build Back Better plan, nothing happened. All the investments of billions of dollars that were part of his domestic agenda were stalled in the Senate and didn’t go anywhere,” Cortina said.

Although a pivot toward domestic issues may be a wise move, the Democratic Party may continue to lose ground through a mistaken assumption that Hispanic voters are essentially a monolithic category whose interests are defined by one issue—immigration—and that the party that says the correct things on that issue has the Latino vote locked up.

“A lot of people make that mistake, and it is completely untrue. Immigration is an issue for Latino voters. However, it is not the most important issue. If you want to have a campaign based on immigration, it’s only going to get you so far,” Cortina said.

In his view, a party with a successful electoral strategy is one with a balanced approach and one that avoids signaling its virtue on immigration policy at the expense of other issues of concern to voters in their day-to-day lives.

Gallup polls tend to find that roughly a third of respondents favor more immigration, a third favor less, and a third are fine with maintaining current levels, Cortina said. He described Latinos as no different when it comes to the breakdown of opinion on the issue. He characterized Latinos as sophisticated voters unlikely to be swayed by a one-sided pro-immigration platform when they see that their economic situation isn’t improving.

Failing to Keep the Public Safe

Americans’ perceptions that they’re less safe may also impact the incumbent party’s prospects in the midterms, according to experts, pointing to the uptick in violent crime across big cities since the start of the COVID-19 pandemic. While some researchers attribute the rise in crime to factors caused by the pandemic, others believe that the rise in violent crime was directly linked to the Black Lives Matter protests of 2020, progressive policies under the banner of “defund the police,” and the resulting pullback by law enforcement.

The horrific shooting on a Brooklyn subway on the morning of April 12, allegedly committed by Frank R. James, a man with an extensive criminal record, is only the latest in a series of high-profile incidents that have fed the perception that crime is out of control in Democrat-run cities and that progressive policies and “defund the police” rhetoric are endangering lives, according to Michael Alcazar, a professor at John Jay College of Criminal Justice and a former New York Police Department (NYPD) officer.

For instance, in New York, then-Democratic Mayor Bill DeBlasio, in response to the Black Lives Matter protests of 2020, pledged to slash the police budget by $1 billion. In 2021, the city’s crime rate saw a large jump, with the total tally for major crimes exceeding 100,000 incidents for the first time since 2016, according to NYPD data. Felony assaults that year exceeded 22,000 incidents for the first time since 2001.

New York isn’t much different from other cities in this regard, Alcazar said, noting that the surge in crime has put current Democratic Mayor Eric Adams in a difficult position.

“Around the nation, a lot of Democratic-run cities are experiencing a spike in crime, shootings, and homicides. New York City is run by a Democratic mayor who is trying to alleviate the disaster that the previous administration left. It’s come under heavy criticism now because crime has gotten progressively worse,” he said.

Alcazar thinks it’s highly likely that the rhetoric and policies around law enforcement that have found champions in the Democratic Party will come back to haunt the party when voters render their judgment in November.

While the Democratic Party doesn’t really try to reach out to Trump supporters and some of its leading figures are openly contemptuous of that segment of the electorate, the party is in trouble, even with a voter demographic long considered safely in its camp. This doesn’t bode well for the fall, according to political consultants and strategists.

“For Biden to be underwater with Hispanics, a traditionally Democratic constituency, is disastrous. If Hispanics vote just 40 percent for the GOP or stay at home, Democrats don’t stand a chance in Florida, Texas, Arizona, or Georgia races,” said Keith Naughton, principal of Silent Majority Strategies, a Maryland-based consulting firm.

Naughton faults Democratic leadership for making bold pronouncements in public, but lacking the resolve and ideological unity to back them up with effective policies. He identified the internal tensions alluded to by Cortina above as a persistent problem for the party.

“The Democratic Party has become a collection of squabbling interest groups, each of whom has a laundry list of uncrossable red lines. The only thing holding the Democrats together is hating Donald Trump. Biden did not run on an affirmative policy, he just ran as ‘not Trump,’” Naughton said.

This lack of coherence and negative campaigning have benefited Republicans, he said.

“Trump and the Republicans became much more appealing to working-class voters and discovered that the issue of securing the border was not toxic for Hispanics. Like most working-class voters, they see mass, uncontrolled immigration as a threat to their livelihoods,” Naughton said.

He said he doubts that the Democrats can pull out of their tailspin and get their numbers up in advance of the midterms. The issues of top concern to voters may be beyond Biden’s power to resolve.

“The Ukraine–Russia war will continue to affect energy and food supplies, causing instability and making inflation worse,” he said. “Biden is stuck.”

Biden faces the imperative of keeping Ukrainian resistance to Russia going strong while trying to deal with inflation at home, even as his own base pushes for ever-higher levels of government spending, according to Naughton.

“Only Trump can save the Democrats. Democratic voters hate Trump more than anything, and Biden and the Democrats are going to use fear of Trump as a motivator for turnout,” he said.