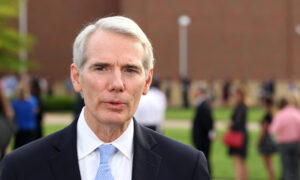 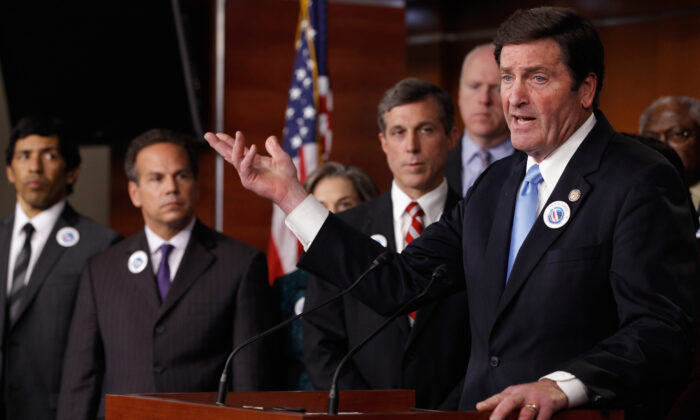 (R) Rep. John Garamendi (D-Calif.) joins House Democrats to announce their "Make It In America" agenda at the U.S. Capitol in Washington on May 4, 2011. (Chip Somodevilla/Getty Images)
Politics

Rep. John Garamendi (D-Calif.) said on Wednesday that he thinks the House should hold a formal vote to authorize the impeachment inquiry, breaking away from his party leadership’s position that a vote is not required.

“I think it’s time for us to put a vote on the floor, a resolution for the inquiry structured in such a way that it can move forward with full power of the Congress behind it,” Garamendi told “CNN Newsroom,” adding that it would “strengthen Congress’s hand.”

Garamendi said that he thinks a vote could even come in a week after the White House sent a letter to House Speaker Nancy Pelosi (D-Calif.) and three top Democrats on Tuesday rejecting compliance with lawmakers’ demands on the impeachment inquiry.

“They want a fight, OK,” Garamendi said. “Then let us arm ourselves completely and totally with the full power of Congress.”

Last week, Pelosi sent a letter to House Minority Leader Kevin McCarthy (R-Calif.) pushing back on his suggestion that the chamber needed to vote to proceed with their inquiry into the president. She said that “there is no requirement under the Constitution, under House Rules, or House precedent that the whole House vote before proceeding with an impeachment inquiry.”

House Democrats have issued a number of subpoenas as part of their probe including to the White House, State Department, the Pentagon, and Trump’s personal lawyer Rudy Giuliani.

In its Tuesday letter, the White House told Pelosi and other top Democrats that the inquiry “violates fundamental fairness and constitutionally mandated due process,” and called on House members to cease their impeachment efforts. The letter also stated that the inquiry runs afoul of congressional norms, and accuses the Democrats of failing to afford the president due process protections and fairness.

“You have denied the President the right to cross-examine witnesses to call witnesses, to receive transcripts of testimony, to have access to evidence, to have counsel present, and many other basic rights guaranteed to all Americans.”

Later that day, Pelosi responded to the letter in a statement, accusing the president of trying to “normalize lawlessness” and described the letter was “manifestly wrong.”

“This letter is manifestly wrong, and is simply another unlawful attempt to hide the facts of the Trump Administration’s brazen efforts to pressure foreign powers to intervene in the 2020 elections,” Pelosi said in her statement.

The impeachment inquiry is centered on allegations made by an anonymous whistleblower about the president’s conduct during a phone call with Ukrainian President Volodymyr Zelensky in July.

House Democrats accuse the president of leveraging his office and withholding U.S. aid to Ukraine to obtain “dirt” on a political opponent—2020 Democratic candidate Joe Biden.

A transcript of the call, released by the White House on Sept. 25, revealed that Trump had asked Zelensky to look into Biden’s dealings in Ukraine but hadn’t pressured him, and there was no quid pro quo.

Trump has defended his request for Ukraine’s assistance, saying that his intentions were to investigate alleged corruption, not to look for information on a political opponent. In 2018, Biden boasted that he had pressured then-Ukrainian President Petro Poroshenko to remove a prosecutor who was investigating a Ukrainian gas company, Burisma, where the former vice president’s son held a lucrative board position.