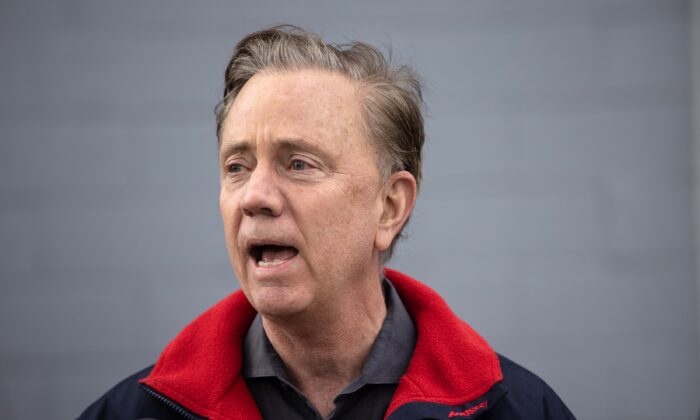 Connecticut Gov. Ned Lamont speaks during a visit to a vaccination clinic in Stamford, Conn., on March 14, 2021. (John Moore/Getty Images)
By Jack Phillips

The governor of Connecticut said that he will not reinstate a mask mandate, citing data suggesting that it is not “curbing the spike” in COVID-19 cases elsewhere.

Gov. Ned Lamont, a Democrat, told reporters this week that COVID-19 cases have surged in New York City in recent days despite a statewide mask mandate that was issued by the governor several weeks ago.

Mask mandates are “not curbing the spike down in New York City, which is probably ground zero,” Lamont told a reporter in response to a question about whether he would consider such a regulation.

“If I think about things, I certainly think about nursing homes and other congregate settings where I think the booster shot is probably the number one priority, to make sure everybody that can be boosted is boosted there. That would be my next priority,” Lamont added.

On Dec. 10, New York Gov. Kathy Hochul announced that masks will need to be required to be worn in all indoor places unless businesses or venues ask patrons or employees to show proof they’re vaccinated. However, she later backtracked and said that counties have the option not to opt into the mandate, as some New York county executives criticized her directive and vowed that they wouldn’t enforce it.

“My health department has critical things to do that are more important than enforcing this, and I think small businesses have been through enough already,” Orange County Executive Steve Neuhaus, a Republican, told news outlets. “God forbid the governor directs the state police to go out and enforce it.”

Hochul’s office on Dec. 20 confirmed New York state will not send inspectors to businesses to see if they’re enforcing the mandate.

“Enforcement will be done by local health departments,” Hochul spokesperson Hazel Crampton-Hays told news outlets at the time. “Governor Hochul made $65 million available today for counties’ enforcement needs, including personnel costs associated with spot checks and other enforcement. We are all in this together as we fight this winter surge.”

In a briefing earlier this week, Lamont announced his state would distribute about 3 million at-home COVID-19 rapid tests and 6 million N95 masks to deal with an increase in COVID-19 cases. Distribution of the items is scheduled to start Thursday, Lamont said.

“That means in terms of some of our hardest-hit populations, some of our congregate settings, some of our homeless shelters … make sure those fast-acting tests are there so we can make sure that you know that you’re safe and if you’re not safe, how to make sure we keep you quarantined and keep everyone around you safe,” Lamont remarked.