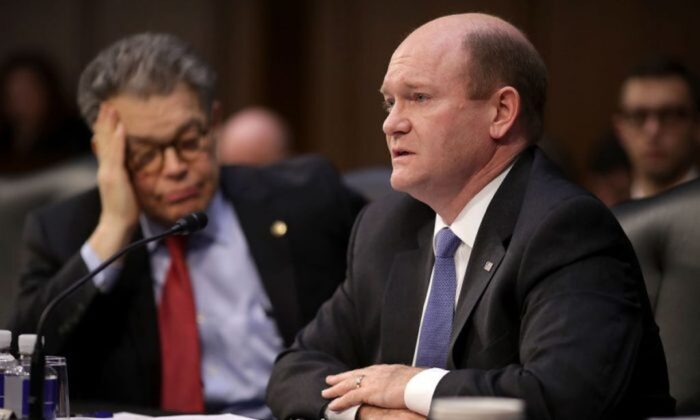 Sen. Chris Coons Suggests He Is Open to Expanding the Supreme Court

“Like Joe Biden, I’m not a fan of expanding the court, but we have a few weeks here to see whether there are four Republicans who will step back from this precipice,” Coons told CNN on Oct. 18.

Coons asserted that Republicans and President Donald Trump are planning to overturn the Affordable Care Act, known as Obamacare, during the pandemic by trying to confirm Barrett. The Supreme Court will hear an Obamacare-related case about a week after the Nov. 3 election.

Biden hasn’t revealed whether he supports packing the court with presumably liberal-leaning justices. He has spent several weeks avoiding directly answering the question.

“[Republicans are] doing this to get someone on the court just in time, a week after the election, to take away critical health care protections from a majority of Americans; we need to focus on that,” Coons told CNN.

“And then if we happen to be in the fact pattern where we have a President Biden, who will have to look at what the right steps are to rebalance our federal judiciary.”

The Senate Judiciary Committee last week held hearings for Barrett’s confirmation. The full chamber is expected to approve her confirmation before Nov. 3.

Biden said on Oct. 16 that he will “make clear” his position on packing the Supreme Court when the Senate votes on Barrett.

“I’m going to make clear my position in the next several days when they vote on this nominee, but I’ve got to keep the focus on that,” he told Fox 2 Detroit, adding that “when the [Senate Judiciary] Committee makes the decision, and the vote begins to occur, that’s when I’ll let you know my position.”

Biden said that it’s Republicans who are “packing the court” by filling the vacancy left after the death of Justice Ruth Bader Ginsburg. However, packing the court doesn’t normally refer to filling vacancies, but to expanding the number of judges or justices.

In the Fox 2 interview, Biden didn’t provide a definitive answer when asked, “Is there any circumstance in which packing the court would be appropriate?”

“As you know, I’ve not been a fan of packing the court, but what may happen is that we have to take a look at how this all works out and determine whether there’s other means by which we should take a look at how to make sure that this kind of thing doesn’t happen,” he said.