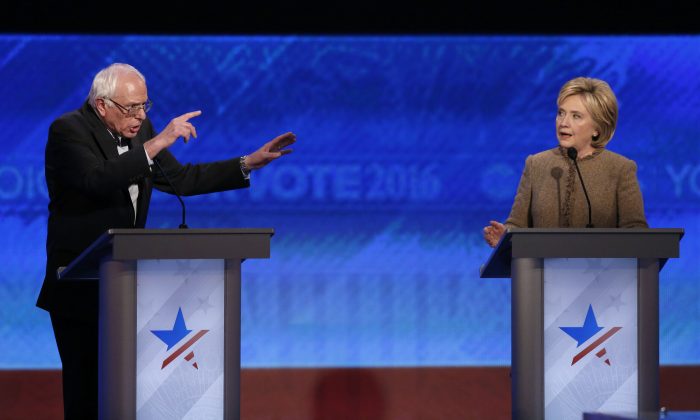 MANCHESTER, N.H.—A day after their campaigns exchanged heated accusations over a breach of the Democratic Party’s voter database, Bernie Sanders and Hillary Clinton decided to move on at the final presidential debate of the year.

Sanders extended the olive branch after one of his staffers was fired this week for improperly accessing Clinton campaign voter data. Asked if he wished to apologize, Sanders did, to Clinton and to his own supporters. His campaign later said it had suspended two more aides.

Clinton said her campaign was “distressed” when the news surfaced, but she quickly added: “I don’t think the American people are all that interested in this.”

While the allegations that Sanders’ campaign improperly exploited a breach in the Democratic National Committee voter database kicked off the third Democratic presidential debate in New Hampshire, it wasn’t the issue the defined it. Candidates spent most of the night engaged in an extensive conversation about foreign policy and national security.

A look at some key takeaways from the third Democratic presidential debate.

Clinton’s campaign on Friday bitterly accused the Sanders team of stealing some of its voter data, and the Sanders campaign blamed the vendor that runs the database and the Democratic National Committee for the breach. The Vermont senator’s campaign even sued the DNC to restore its access, after the party cut if off from the database.

But on the debate stage, Sanders offered apologies while making clear he was still unhappy with the DNC. That’s a message in keeping with his anti-establishment pitch to beleaguered voters and a way to connect with supporters who believe the DNC devised its shortened, six-debate plan to benefit Clinton.

Sanders tried to muddy the waters a bit by implying it was possible Clinton’s campaign could have some of his team’s data. That’s even though the software vendor said only one campaign was involved in the breach, and there’s no evidence that Clinton has any Sanders data.

He wasn’t on the debate stage, but Republican front-runner Donald Trump was one of Clinton’s biggest adversaries of the night.

Clinton said Trump was becoming the Islamic State group’s “best recruiter” with his call to temporarily bar Muslims from entering the United States. And when she said she understood that people are fearful after the attacks in Paris and San Bernardino, California, she pivoted to attack Trump.

“Mr. Trump has a great capacity to use bluster and bigotry to inflame people and to make them think there are easy answers to very complex questions,” she said.

And when she described the need to build a coalition of Arab nations to fight the Islamic State, she said: “Bringing Donald Trump back into it, if you’re going to put together a coalition in the region to take on the threat of ISIS, you don’t want to alienate the very countries and people you need to be part of the coalition.”

Clinton has often used Republicans as foils to make the case that she is the Democrat who would give the party its best chance of holding onto the White House. Bringing up Trump allows her to present herself as a serious figure who would smoothly move into the White House and represent the U.S. around the globe.

One of the sharpest exchanges at the debate came when Clinton and Sanders discussed their drastically different approaches on foreign policy. Clinton, a former secretary of state, said America must remain an engaged global leader, while Sanders said the country should be wary of involvement in complex foreign conflicts.

Sanders said he wants to make “secondary” the fight against Syrian leader Bashar Assad and focus exclusively on defeating the Islamic State. “It is not Assad who is attacking the United States,” he said. Clinton argued that both goals can be pursued simultaneously.

Sanders said he worried that Clinton is “too much into regime change and a little bit too aggressive without knowing what the unintended consequences might be.” Clinton struck back, reminding Sanders that he “voted for regime change” in Libya.

Clinton portrayed herself as the most seasoned candidate on foreign policy, arguing “these are all difficult issues” that she’s been dealing with for “a very long time.”

Former Maryland Gov. Martin O’Malley has struggled to move beyond single digits in polls and tried to cast the dispute over campaign data as a frivolous issue few Americans care about, particularly during the holidays. Many viewers, he said, were “wondering how they’re even going to be able to buy presents for their kids.”

O’Malley has tried to present himself as a fresh face and to play up his outside-Washington credentials. And at 52, O’Malley is a generation younger than Clinton and Sanders — something of which he reminded viewers.

“Can I offer a different generation’s perspective on this?” O’Malley interrupted at one point, drawing some boos from the crowd.

Despite his low standing in the polls, Clinton was prepared for O’Malley’s criticism. When he suggested Clinton couldn’t separate herself from Wall Street, she said he was hypocritical and had “no trouble” raising money from major corporations when he led the Democratic Governors Association.