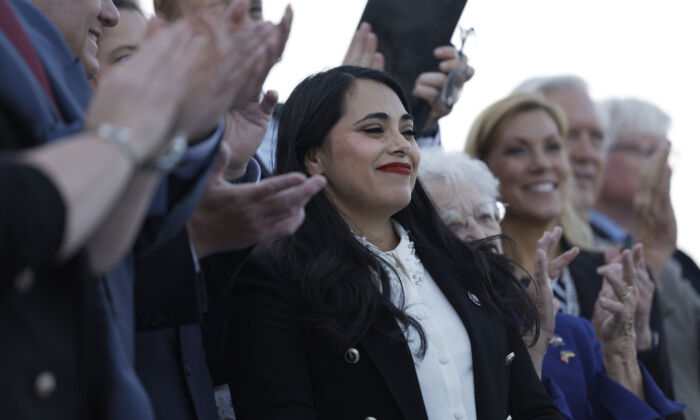 U.S. Rep. Mayra Flores (R-Texas) is applauded after being sworn into Congress in Washington on June 21, 2022, after winning a special election in the state’s Congressional District 34, a traditionally Democratic district where she is running as an underdog in November as one of more than 100 Latino candidates running for the U.S. House and U.S. Senate. (Anna Moneymaker/Getty Images)
2022 Midterm Elections

Democrat congressman Vicente Gonzalez took aim at his Republican opponent on Sept. 8, saying outside money was flooding Texas congressional races in an effort to steal the election.

Rep. Mayra Flores (R-Texas) won the election for an open seat in the 34th Texas Congressional District on June 14. She is the first Republican elected in the heavily Hispanic Rio Grande District in more than 100 years.

Gonzalez, a moderate Democrat currently representing the 15th Congressional District, will face off against Flores in the next election in November because of redistricting.

On Thursday, Gonzalez attended the “go vote Blue” event in Brownsville, Texas, and claimed the special election was stolen.

“There’s millions and millions of dollars from outside our region and outside our state that are coming here to try to steal our elections and take away your value and take away the process that we rely on, which is elections,” Gonzalez said, according to Fox News.

“They stole that last election. They spent $3 million to our $250,000, they campaigned for two years, and they still only won by less than one percent,” Gonzalez said. “So, the way to turn this around is getting out and vote.”

The recording was later posted by the newly elected congresswoman on Twitter late Saturday, where Gonzalez can be seen sitting next to Rep. Adam Schiff (D-Calif.).

Gonzalez shared an event photo in a Sept. 9 post, where he thanked Schiff for traveling to the state to campaign for him.

“Thank you to my friend, @RepAdamSchiff, for visiting the #RGV this week,” Gonzalez wrote. “It’s important for those in Washington to know and appreciate what South Texans have to offer and I was thrilled to show him around.”

Flores, in response, called Schiff’s visit a “desperate” attempt by the far left.

“The far left is getting pretty desperate when Adam Schiff is coming down to Texas to save Vicente Gonzalez,” she said. “The swamp is protecting one of its own.”

Flores was sworn into office on June 21, replacing former Rep. Filemon Vela (D-Texas), who resigned to work for a law and lobbying firm Akin Gump in March. Flore will hold the seat until next January unless she can beat Gonzales to serve for a full term by winning in the fall.