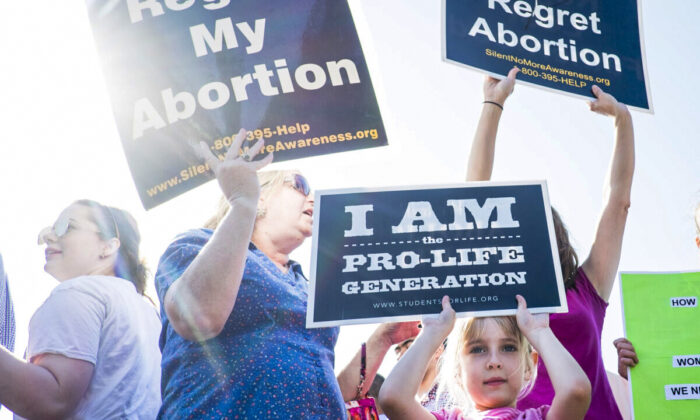 Pro-life activists demonstrate on the steps of the U.S. Supreme Court in Washington on June 27, 2016. (Pete Marovich/Getty Images)
Democrats

The campaign arm for House Democrats is spending tens of thousands of dollars to promote a pro-life Catholic candidate in Texas, despite the party’s stance supporting the wide availability of abortion.

Dan Sanchez, a Democratic candidate running in a special election for Texas’ 34th District on June 14, is now backed by a $100,000 coordinated spend for his campaign from the Democratic Congressional Campaign Committee (DCCC), the committee devoted to electing Democrats to the House. The move was unveiled over the weekend as ads began circulating, according to Patrick Svitek, a political correspondent for The Texas Tribune.

It came days after a virtual forum that was featured on Facebook with Futuro RGV when Sanchez retaliated that he is “pro-life across the board.”

“My views haven’t changed since I was a little boy,” the candidate told the panel on May 31, touching on his family background. “I was raised as a Catholic, and as a Catholic, you know I’m pro-life. … Although we respect women’s rights, we have to also respect the children’s rights.”

Calling abortion “a very difficult topic” given the different variations, Sanchez, who will face off against three other candidates including GOP candidate Mayra Flores, said that policies should be in place for new mothers, such as proper child care and healthcare.

If elected, Sanchez will be one of the few anti-abortion Democrats in Congress, besides incumbent Rep. Henry Cuellar (D-Texas). Yet, such a view goes against the overwhelming support for abortion in the national party.

In the #TX34 special election, @DCCC is doing a $100K coordinated spend w/ @dansancheztx34 on digital, per his campaign. Ads started today. pic.twitter.com/urKFyOhcUI

“Democrats are fighting to codify Roe v. Wade,” the DCCC said via Twitter last month, referring to a 1973 U.S. Supreme Court decision that legalized abortion across the whole country. The statement followed a leaked Supreme Court draft ruling for the scenario of a majority of justices favoring overturning the landmark abortion ruling.

Sean Patrick, the chairman of the committee, soon issued a joint statement the following day with Democratic National Committee Chair Jaime Harrison and five others, calling the national situation on abortion access a “crisis.”

“We want to make this very clear: Abortion is legal. It is your right,” they wrote.

The Epoch Times has reached out to the DCCC for comment.

The committee announced that its independent expenditure has so far reserved $21.4 million for broadcast TV ad buys, marking its first reservation of the 2022 cycle.

Last September, the House passed the Women’s Health Protection Act that would outlaw many restrictions on abortions. Life-long Catholic Cuellar was then the only House Democrat who voted against the act. A bipartisan Senate vote last month blocked the bill after opponents deemed it too extreme.