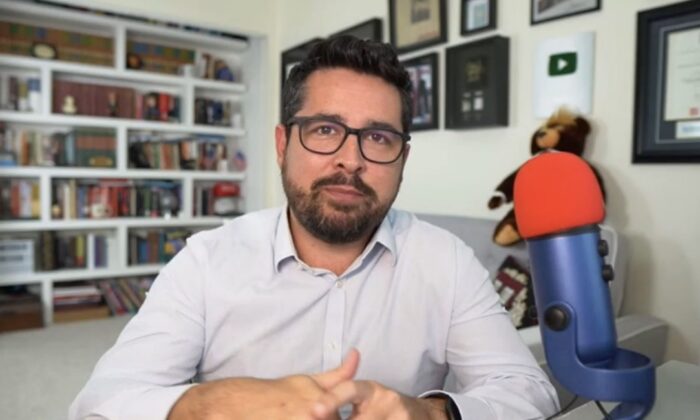 The new startup, Latino Media Network (LMN), launched in early June by activists Stephanie Valencia and Jess Morales Rocketto, will focus on “content creation, talent incubation, and distribution across multiple platforms” to reach the Latino market, according to a company statement.

The two founders have secured $80 million in capital from investors including Lakestar Finance, an investment group affiliated with Soros Fund Management, the statement said. The new company almost immediately signed a deal to purchase “18 radio stations in 10 cities from coast to coast in a $60 million all-cash deal,” the statement read.

Upon the transition of the stations, scheduled to be completed in late 2023, the network will be able to reach nearly a third of the U.S. Latino population in large cities such as New York, Los Angeles, Miami, Houston, Chicago, Dallas, and others.

Figueiredo told EpochTV’s “Crossroads” program that the new media company aims to win back Latino votes for the Democratic Party through propaganda using funds provided by the investment firm tied to George Soros.

According to a recent survey (pdf) by YouGov, a British international pollster, Trump would have 39 percent of the Latino votes while Biden would have 28 percent among the Hispanic population in the 2024 presidential election, so the left is losing Latino votes in America, Figueiredo said.

“No one ever thought this was possible,” he said.

Then-President Barack Obama won 71 percent of Latino votes in the 2012 election, according to Pew Research Center.

“The Democratic Party strategy was to change the demographics in America to make sure Latinos became the majority of the country,” Figueiredo said, citing a book by Ann Coulter, a conservative author.

Then, if Democrats have the majority of the Latino votes, “they would win all elections forever,” he explained.

Sens. Marco Rubio (R-Fla.), Rick Scott (R-Fla.), and Tom Cotton (R-Ariz.), together with three Republican House Representatives, sent a letter to the Federal Communications Commission (FCC) in June expressing their concerns about the planned takeover of the Spanish-language radio stations by LMN, which they called “a partisan organization.”

The lawmakers pointed out in the letter that LMN’s funding comes “mostly from Democrat partisans” including an investment firm tied to leftwing billionaire George Soros. They also stressed that the company leaders lack experience in broadcasting.

Due to these issues, the signatories requested the FCC to scrutinize the deal.

Valencia, a co-founder of the new media company, served as one of the senior advisers to President Barack Obama through his presidential campaign and both terms in office and worked as the deputy Latino Vote Director on Obama’s 2008 campaign. She also was an aide to the Secretary of Commerce during the Obama administration. During her career, Valencia served on the boards of three organizations, including The Latino Victory Project.

Her co-founder, Rocketto, served as the political director of the National Domestic Workers Alliance and was a chair of the organization’s feminist campaign for immigration reform. She is also an alumna of Hillary for America, Obama for America, the Democratic National Committee, and other organizations such as the AFL-CIO, the federation of labor unions, and the New Organizing Institute, the organization responsible for training the Democratic Party’s digital organizers, currently dissolved.

“The stations implicated in this sale are pillars of their local community,” the letter said. “For example, Radio Mambí serves a vital role in South Florida, offering listeners critical coverage of the dictatorship in Cuba and local news reporting. In some cases, these [stations] are among the last media outlets dedicated to, and staffed by, the local community.”

“The hostile takeover by LMN would destroy those long-standing community connections.”

Seeing diminishing support from Hispanic voters for Democrats’ socialist policies, the progressive politicians, instead of overhauling their own unpopular policies, try to win Latino votes through propaganda based on far-left ideologies and silencing conservative voices who challenge the leftist propaganda, the letter stated.

The letter also reminds the FCC that in April 2021, the all-Democrat Congressional Hispanic Caucus took action to stop the sale of a single AM radio station in Miami. One of the Caucus members commented on the purpose of their action at that time, saying “To win in 2022 this must stop!” according to the letter.

In April 2021, ATV Holdings Trust, which owns the América TeVé network and three TV stations in the Miami market, proposed to buy Radio Caracol, a Spanish-language news-talk station, with an intention to rebrand it and add a lineup of conservative talk hosts to its program, according to Inside Radio.

The Congressional Hispanic Caucus voiced its concerns over the dismissal of one of the top Caracol hosts and claimed that after the acquisition the station would spread misinformation among the local Hispanic community, Inside Radio reported. The FCC dismissed the transfer due to a request of the station’s seller and the deal was halted, according to the same source.

Latinos in general like big government, especially when it distributes money to people, but on the other hand they oppose the woke agenda due to their religious beliefs, Figueiredo said.

“Latinos are in vast majority Christians of some sort, either Catholics or Protestants and Evangelicals,” he said. They do not approve of abortion, particularly late-term abortion, or the transgender ideology being pushed on children.

Most countries in Latin America have leftist governments, with the exception of Brazil—which will hold an election this year—Uruguay, Paraguay, and Ecuador, Figueiredo said.

The leftwing candidates in Latin America try to follow the socialist woke agenda used in the United States, Canada, and Europe, but it has not been well-received in the Latin nations, the journalist said.

For example, introducing racial division seems strange to Brazilians, as there was no racial segregation in Brazil, said Figueiredo, who said he ran away from Brazil when it was ruled by socialist president Dilma Rousseff.

Former Brazilian President Luiz Inácio Lula da Silva, who advanced socialist policies during his presidency and is running for reelection this year, faced horrible backlash for saying that police officers were not human beings, Figueiredo said.

“That’s like a step over defund the police, but it’s the same ideology.”

Brazilians like their police like Americans do and call the police for assistance if needed, Figueiredo said.

America should know that most of the economic policies that the Democratic Party pushes forward in America have been tried in Latin America for several years, several times, Figueiredo said. “And the result is catastrophic. It’s a disaster.”

He gave examples of Venezuela and Argentina which both used to be rich countries but have been destroyed very fast by leftist policies.

“Sometimes [it] may look like America is indestructible. It is not. It takes centuries to build a country, to build a society as great as ours here in America, but it takes just a few years to destroy it.”

“We should learn American history, learn why this country is better, and I’m not afraid to say this. America is better than the rest of the countries in America and in the world.”

Latino Americans should not embrace the same policies that destroyed their home nations and made them leave to try a better life in the United States, Figueiredo said.