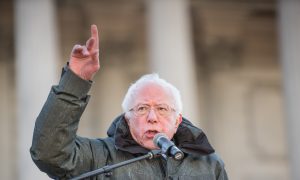 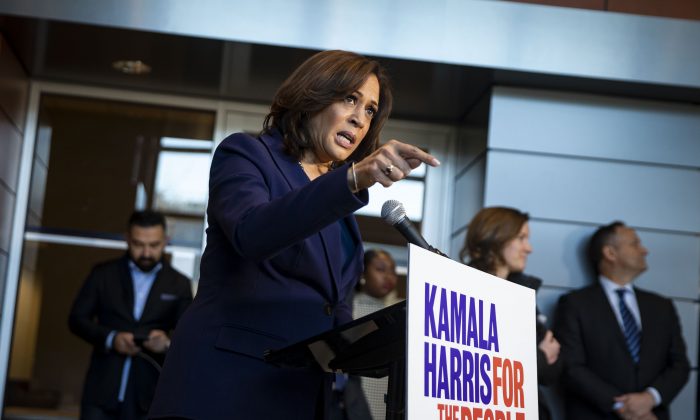 Sen. Kamala Harris (D-Calif.) speaks to reporters after announcing her candidacy for president of the United States, at Howard University, her alma mater, in Washington on Jan. 21, 2019. (Al Drago/Getty Images)
Politics

Nearly half a dozen 2020 Democratic presidential candidates are making the U.S. Supreme Court an issue in their campaigns for the White House.

But with Republican-appointed justices firmly in the majority, 5–4, an increasingly popular proposal is to expand the number of seats at the nation’s highest court.

Not since President Franklin D. Roosevelt has a court-packing scheme been attempted, and that effort failed in 1937, when members of Roosevelt’s own Democratic Party voted against it. But, according to Sen. Kamala Harris (D-Calif.), all options are on the table in 2020.

On March 18, Harris told Politico that packing the court is something she’s taking seriously.

“We are on the verge of a crisis of confidence in the Supreme Court,” said Harris. “We have to take this challenge head-on, and everything is on the table to do that.”

Harris, along with Sen. Diane Feinstein (D-Calif.), was among the leading opponents of the confirmation of Justice Brett Kavanaugh—a President Donald Trump appointee—in October 2018. Harris sounded a similar alarm when Kavanaugh was confirmed.

“Millions of Americans are rightly outraged at this hasty and unjust process, which threatens to cloud the legitimacy of the Supreme Court of the United States,” she said in a statement.

Democratic Sens. Elizabeth Warren of Massachusetts and Kirsten Gillibrand of New York also have refused to rule out a court-packing power play.

“It’s not just about expansion, it’s about depoliticizing the Supreme Court,” said Warren on March 18. “It’s a conversation that’s worth having,” she added.

The U.S. Constitution calls for presidents to nominate Supreme Court justices, but requires the Senate to confirm them. Senate Majority Leader Mitch McConnell (R-Ky.), opted to block Garland in 2016—not without precedent—and instead, let voters decide the balance of the Supreme Court during an election year.

Pete Buttigieg, the 37-year-old progressive mayor of South Bend, Indiana, is strongly considering a Democratic campaign to unseat President Trump in 2020. Buttigieg launched an exploratory committee in January and was in the early primary state of New Hampshire earlier this month.

Speaking at the New Hampshire Institute of Politics on March 8, Buttigieg championed a Supreme Court expansion, as well as the abolition of the Electoral College.

“Obviously, I’d like to see a court that is in line with my values. So would everybody else,” he said. “The question to me is how do we arrest the decline in the perception of the court toward being viewed as a nakedly political institution.”

“There’s another idea of adding term limits on those justices so that there’s a more regular rotation through there. We’re a country of 320 million people. There’s got to be the talent and the wisdom and the perspective, and that court should be able to reflect the diversity that we are composed of,” he added.

While the Constitution outlines the process for appointing Supreme Court justices, it is silent about the number of seats on the Supreme Court bench. Expanding the bench to dilute its current makeup, or to benefit Democrats, would require legislation passed by both houses of Congress and a signature from the president.

Should Democrats win the White House and flip the Senate in 2020, and maintain a comfortable advantage in the House, they could eliminate the Senate filibuster and succeed in expanding the court. Doing so would require a simple majority in the Senate instead of the high threshold of 60 votes.

Republicans currently hold a 53-47 seat advantage in the Senate. The GOP will defend 22 seats in 34 total Senate elections in 2020. To wrest control, Democrats need a net gain of three seats if they win the White House or four seats if a Republican prevails.

The so-called nuclear option was first utilized by former Senate Majority Leader Harry Reid (D-Nev.) in 2013, and McConnell returned the favor in 2017 to ensure the confirmation of Justice Gorsuch.

If Democrats follow through on expanding the Supreme Court, “it would usher in a new and frightening era for the judicial arms race,” according to Sarah Turberville of the Constitution Project of the Project on Government Oversight, and Anthony Marcum of the Governance Project at R Street Institute.

“If Congress, under control of Democrats, increased the number of seats, Republicans would eventually respond in kind,” they said in an op-ed.