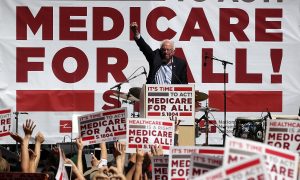 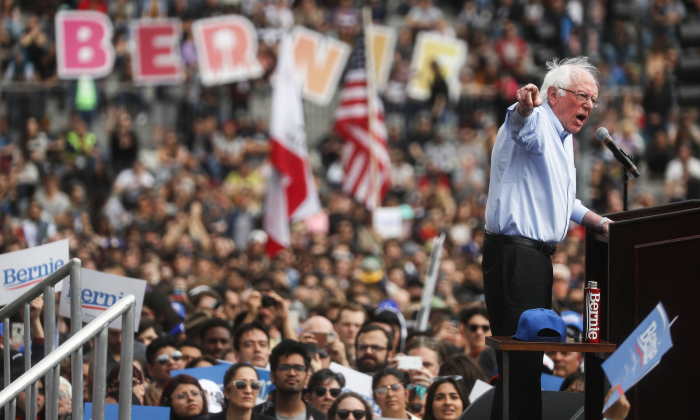 The Democratic contenders for their party’s nomination to run against President Donald Trump in the 2020 election are increasingly embracing some of the most radical socialist ideas in U.S. history.

Socialist policies received virtually no support among Democrats as recently as 2013, when not a single Democrat in the Senate co-sponsored the Medicare for All bill introduced by Sen. Bernie Sanders (I-Vt.). Just five years later, in 2018, one-third of Senate Democrats and two-thirds of House Democrats have signed on to the proposal.

The trend is even more prevalent among the Democrats running for president. Of the candidates who have officially declared their intention to run and are polling at 1 percent or more, seven out of eight contenders support Medicare for All and the Green New Deal. Sen. Amy Klobuchar (D-Minn.) is the exception among the field, although even she views both policies as key long-term goals.

In addition to the socialist proposals, the Democratic candidates are open to policies that would radically reshape the electoral, judicial, legislative, and judicial systems, including getting rid of the Electoral College, packing the Supreme Court, eliminating the filibuster rule, and abolishing the Immigration and Customs Enforcement (ICE) agency.

Cognizant of the hard-left turn among the Democrats, Republicans and the president are casting the upcoming election as a referendum on socialism versus freedom. The Democrats have responded by treading carefully when it comes to the socialist proposals. In a procedural vote on March 26, not a single Democratic senator, including Sanders, an independent who caucuses with the Democrats, voted in favor of the Green New Deal.

Among the 47 Democrats who did not vote “aye” for the Green New Deal were the five senators who are the official co-sponsors of the resolution: Sanders, Sen. Kamala Harris (D-Calif.), Sen. Elizabeth Warren (D-Mass.), Sen. Cory Booker (D-N.J.) and Sen. Kirsten Gillibrand (D-N.Y.).

The Green New Deal calls for a Soviet-style 10-year mobilization that would, by one estimate, cost U.S. taxpayers up to $93 trillion. In addition to vague promises of universal access to food and nature, the resolution calls for the removal of all gas-engine cars and the upgrading or replacing of every building in the United States.

The 2020 Democrats backing the Green New Deal subscribe to the same view of climate change catastrophe, and embrace the idea that only radical action can prevent an irreversible spiral toward global destruction in 12 years.

For years, Sanders was a lone advocate of Medicare for All. After he put up a formidable challenge to Hillary Clinton in 2016, a large swath of the Democratic Party warmed up to his ideas.

Like the Green New Deal, Medicare for All is embraced by the Communist Party USA and the Democratic Socialists of America, the largest socialist organization in the United States. Of the leading 2020 candidates, only Sanders willingly identifies as a socialist. Former Rep. Beto O’Rourke of Texas has refused to disavow socialism.

The $93 trillion cost for 10 years of the Green New Deal dwarfs the current $60 trillion projection for all government spending over the next decade. The astronomical costs of these socialist programs would fall on the shoulders of American taxpayers.

Sanders, Harris, O’Rourke, Warren, Booker, Gillibrand, and South Bend, Indiana, Mayor Pete Buttigieg are all in favor of Medicare for All and the Green New Deal.

U.S. taxpayers would have to shoulder the burden of those grand socialist proposals. According to the 2020 Democratic field, America is wealthy enough, and taxing the rich is one way to foot the bill.

“It would make the ultra-rich pay their fair share & generate nearly $3 trillion over the next 10 years. A lot of rich and powerful people won’t like it–but I don’t work for them,” Warren wrote on Twitter.

The $3 trillion that Warren’s proposal would raise is $122 trillion short of the combined cost of Medicare for All and the Green New Deal, the two policies she embraces.

After the stunning defeat of Clinton in 2016, Democrats are increasingly in favor of abolishing the Electoral College, an institution created by America’s founders to prevent the “tyranny of the majority.”

“Every vote matters and the way we can make that happen is that we can have national voting, and that means get rid of the Electoral College,” Warren said during a CNN town hall earlier in March.

O’Rourke and Buttigieg have also endorsed abolishing the Electoral College, and Harris said she is open to the idea. Sanders has said the institution should be examined.

Eliminating the Electoral College would require a constitutional amendment, but a number of Democratic-leaning states are banding together to circumvent the requirement. The National Popular Vote coalition is coordinating a campaign among states which would call on each member state’s electors to vote in favor of the candidate who won the popular vote, even if another candidate had won the majority of votes in that state. Thirteen states have already enacted laws to go along with the coalition, for a total of 181 electoral votes.

Democrats have long celebrated the Supreme Court for landmark decisions such as upholding Obamacare, legalizing gay marriage, and removing state restrictions on abortions. But after Trump successfully placed two conservative judges into lifetime posts on the bench, several prominent 2020 candidates are now open to reshaping the court in order to restore a liberal majority.

Harris, O’Rourke, Warren, Buttigieg, and Gillibrand are open to expanding the number of seats on the court if elected president, a move that would allow them to pack the bench with liberal justices or at least dilute the conservative influence on the bench.

Booker, O’Rourke, and Warren have also indicated they are open to eliminating the filibuster rule in the Senate. The rule requires a 60-vote threshold to break a filibuster, a measure which promotes bipartisanship.

Both Republicans and Democrats have chipped away at the rule over the years, but it still applies to many of the major bills that come before the Senate.

“So when you talk about changing the filibuster rule, I understand that we are heading, right now, we are heading that way, to people on both sides,” Booker told Pod Save America. “We are heading that way. You hear Trump calling for the end of the filibuster rule all the time. And I understand that if I am the commander in chief, the president of the United States, fighting a tactical battle, that is something that we are moving toward.”

Notably, Booker conceded that changing the rule would also give Republicans more power when they are in the majority, while alleging that Republicans in power would “literally” enact policies “that could cause people’s death.”

Warren, Sanders, and Gillibrand have called for the abolition of ICE, which is responsible for investigating criminal and terrorist activity by foreign nationals in the United States and apprehending and removing illegal aliens.

The calls to abolish or restructure the agency have escalated among the Democrats, in response to Trump’s tough stance on U.S. sovereignty and securing the border.

“In 2002, I voted against the creation of DHS (Department of Homeland Security) and the establishment of ICE,” Sanders wrote on Twitter. “That was the right vote. Now, it is time to do what Americans overwhelmingly want: abolish the cruel, dysfunctional immigration system we have today and pass comprehensive immigration reform.”

Correction: this article has been updated to reflect that universal healthcare is part of the Green New Deal proposal. The associated projected costs have been updated accordingly.