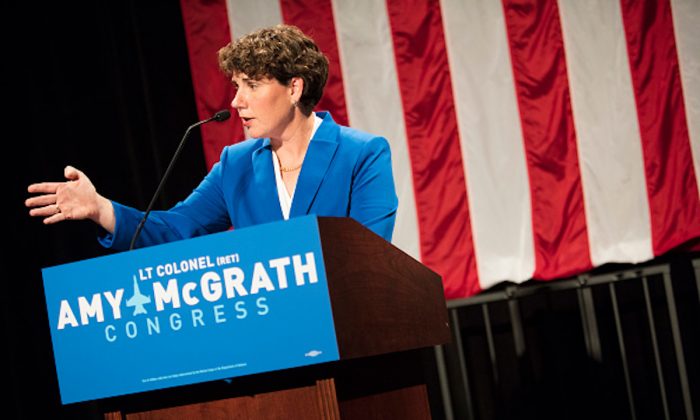 Democratic nominee Amy McGrath concedes the election for Kentuckys 6th congressional district to Republican incumbent Andy Barr at the Eastern Kentucky University's Center for the Arts in Richmond, KY on Nov. 6, 2018. (Philip Scott Andrews for The Washington Post via Getty Images)
US News

A Kentucky Democrat who lost a 2018 bid for a House of Representatives seat says she’s going to challenge longtime Sen. Mitch McConnell (R-Ky.).

Amy McGrath, a former fighter pilot, said in a three-minute video released on July 9 that McConnell has “bit by bit, year by year, turned Washington into something we all despise.”

“I’m running for Senate because it shouldn’t be like this,” McGrath added.

McGrath, 44, joined many of her fellow Democrats in disparaging President Donald Trump, saying at a meeting with voters in 2017 that his election felt like 9/11.

“That morning I woke up like somebody had sucker punched me. I mean, I felt like, ‘what has just happened to my country?’” McGrath said at the event, reported the conservative Washington Free Beacon website.

“The only feeling I can describe that’s any close to it was the feeling I had after 9/11. ‘What just happened, where are we going from here,’ and it was that just sinking feeling of sadness, and I didn’t know what to do.”

She’s now pivoting, trying to portray herself as pro-Trump and McConnell as against the president.

“If you think about why Kentuckians voted for Trump, they wanted to drain the swamp, and Trump said that he was going to do that. Trump promised to bring back jobs. He promised to lower drug prices for so many Kentuckians. And that is very important,” McGrath said during an interview on MSNBC’s Morning Joe on Tuesday, reported the Louisville Courier-Journal.

“And you know what? Who stops them along the way? Who stops the president from doing these things? Mitch McConnell. And I think that that’s very important, and that’s going to be my message—the things that Kentuckians voted for Trump for are not being done. He’s not able to get it done because of Senator McConnell.”

She didn’t explain the change in her feelings about Trump and her campaign didn’t respond to the Courier-Journal’s request for comment.

“McGrath will tell out-of-state donors and liberal activists that Trump winning felt like 9/11. At home she’ll pretend she’s running to work with him,” Matt Whitlock, an adviser for the National Republican Senatorial Committee, told the outlet.

McConnell’s campaign posted a video soon after McGrath’s campaign announcement that featured clips from her own ads during the 2018 run for a House seat. The ads said McGrath is “100 percent pro-choice” and “further left [and] more progressive than anybody in the state of Kentucky.”

One clip showed McGrath calling the proposed border wall between Mexico and the United States “stupid”  and “a waste of money” and another clip showing McGrath saying she would “support a move toward universal health care.”

In her announcement video, McGrath said she wrote a letter to McConnell when she was 13 saying she wanted women to be able to fight for their country. “He never wrote back,” she said.

She featured various Kentucky residents, saying they were struggling in the current climate and needed a better Senator.

McConnell was “elected a lifetime ago,” she added.

McGrath lost to incumbent Rep. Andy Barr (R-Ky.) in the 2018 election by around 10,000 votes, getting 47.8 percent to his 51 percent. She lost despite reportedly raising millions of dollars more than Barr did.