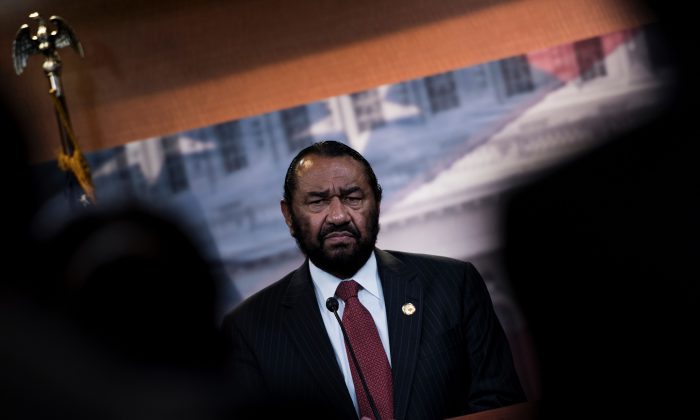 Democrat Who Introduced Articles of Impeachment Walks Off CNN During Interview

Rep. Al Green (D-Texas) walked out during a live TV interview on CNN after being questioned about introducing articles of impeachment against President Donald Trump.

CNN’s Kate Bolduan asked Green if he was playing into the president’s hand after Trump mentioned the move during his rally in North Carolina, terming it “a disgrace.”

Green said he will introduce more articles of impeachment.

House Speaker “Nancy Pelosi also is not—is going to stand up against bigotry, but she has been very clear about the path forward for Democrats on impeachment. She’s not caved to any of the pressure when it comes to impeachment proceedings from Democrats,” Bolduan told Green.

The CNN anchor then read aloud a quote from Pelosi (D-Calif.) in May, saying that Trump is trying to get Democrats “to impeach him.”

Green said he and the speaker have the “same goal” before saying he has to leave.

“I must tell you, I have a vote that’s on now and I must leave, so I do appreciate you very much, but I do have to run now. Thank you,” the Texas Democrat said before abruptly leaving.

Trump, during a North Carolina rally, pilloried the move in Congress.

“I just heard that the United States House of Representatives has overwhelmingly voted to kill the most ridiculous project I’ve ever been involved in, the resolution — how stupid is that? On impeachment,” Trump said. “I want to thank those Democrats, because many of them voted for us.”

Trump, meanwhile, distanced himself from a North Carolina crowd’s spontaneous chant of “send her back” when he made a reference to Rep. Ilhan Omar during a rally on July 17.

When he was asked about the chant the next day, Trump said he “was not happy.”

“I was not happy with it, I disagree with it, but again I didn’t say that, they did,” Trump told reporters in the Oval Office. “It was quite a chant,’” he said.

Trump added that he felt “a little bit badly” when it began, adding that to quell the chanting, he began speaking “very quickly” in an attempt to drown out the crowd.

During the rally, Trump didn’t acknowledge the crowd’s chant and said, “And obviously and importantly, Omar has a history of launching vicious anti-Semitic screeds.”

Omar responded on Twitter, saying that “I am where I belong,” adding “you’re just going to have to deal!”

Apart from Omar, who was born in Somalia, the other three Democratic lawmakers that Trump referenced in a series of tweets—Reps. Ayanna Pressley (D-Mass.), Alexandria Ocasio-Cortez (D-N.Y.), and Rashida Tlaib (D-Mich.)—were born in the United States.