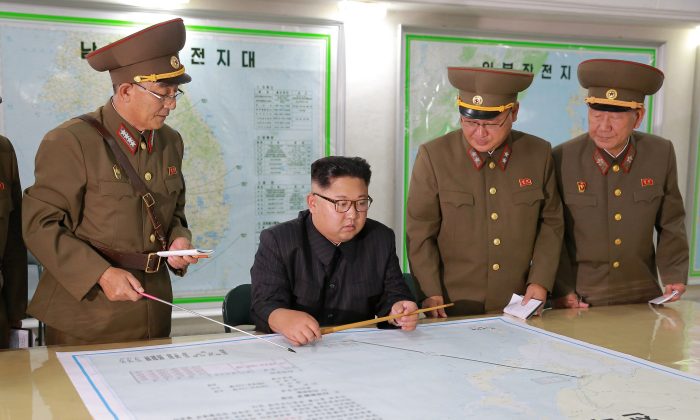 The test may force the United States and its allies to speed up sanctions and other actions to stop North Korea, which were already in motion amid North Korea’s increasing threats and its Aug. 29 test, where it launched an alleged ballistic missile over Japan.

While it does appear that North Korea did test a nuclear weapon, it’s unlikely the test was a hydrogen bomb, as it claims.

Near the location of the site, the U.S. Geological Survey said it detected a 6.3-magnitude explosion. When North Korea tested its last nuclear weapon in Jan. 2016, also claiming it was a hydogen bomb, it measured as a 5.1-magnitude blast.

Scientific American reported at the time that the 5.1-magnitude reading showed the weapon North Korea used was likely a 3.5 to 7-kiloton nuclear weapon (a kiloton is equivalent to about 1,000 tons of TNT), although some estimates say it may have measured as high as 10 kilotons.

South Korea’s Yonhap News Agency reported on Sept. 3 that Kim Young-Woo, the chief of the South Korean parliament’s defense committee, estimated in a provisional report that the latest test yielded a 100-kiloton blast.

A hydrogen bomb, technically known as a thermonuclear bomb, would have been close to 1,000 times more powerful than what the United States used on Japan.

Still, the incident does warrant concern. North Korea does appear to posses nuclear weapons more powerful than those used against Japan during World War II, and the communist regime has claimed it is willing to use them.

Just following news of the test, Sen. Edward J. Markey (D-Mass), the top Democrat on the East Asia Subcommittee of the Senate Foreign Relations Committee, called on the Trump administration to bring together a council of key nations that will offer the North Korean regime an ultimatum.

If North Korea refuses to stop its nuclear tests, Markey urged in a press release that the United States and other nations place “crushing new international sanctions” on the regime.

“Now is the time for Secretary Tillerson to begin an urgent campaign of shuttle diplomacy to bring China, Russia, and the entire community of nations together in a unified diplomatic strategy under the auspices of the United Nations,” Markey said in the press release.

“The international community must apply the kind of crushing economic pressure required to bring North Korea back to the negotiating table, including starving the country of oil and other economic supports that allow it to continue its missile programs,” he said.

Sanctions such as those requested by Markey may already be in motion.

Soon after the announced test, President Donald Trump also wrote on Twitter, “The United States is considering, in addition to other options, stopping all trade with any country doing business with North Korea.”

Trump stated that he will be meeting with Defense Secretary James Mattis and Chief of Staff John Kelly at the White House to discuss North Korea.

The United States, Japan, and South Korea are also allegedly calling for an international embargo to block oil exports to North Korea.

This story was updated with South Korea’s estimates on the size of the recent nuclear blast.