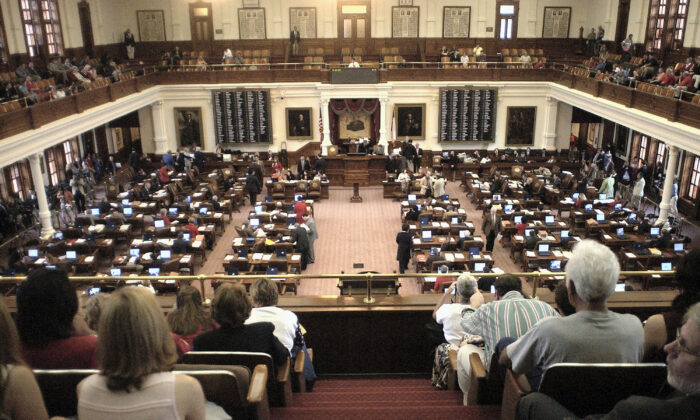 The Texas State Legislature in session in Austin, Texas, on May 16, 2003. (Matt Archer/Getty Images)
Politics

The effort by Forward Majority Action is part of a larger push by left-leaning organizations to change the electoral playing field.

In August 2019, former President Barack Obama launched a campaign called “Redistricting U” to combat partisan gerrymandering in key battleground states that Democrats hope to win in the 2020 presidential election and beyond.

Obama and other Democrats have also been pushing voting reform, including felon re-enfranchisement and, in some places, lowering the voting age from 18 to boost turnout and promote their party’s get-out-the-vote efforts.

Democrats have been moving into traditional Republican turf. Democrats replaced a Republican governor in Kentucky in 2019, while they captured both legislative chambers in Virginia, and hung onto the governorship in Louisiana.

But the group states in its new plan that Democrats need to regain a lot of ground, after losing close to 1,000 state legislative seats and 27 state chambers between 2009 and 2016.

“Those losses left party infrastructure gutted, fundraising anemic, and a scarcity mindset dominating what remained. Funding that does exist is often sub-optimally allocated, clustering in the most flippable state chambers and races, and failing to reach tough but winnable terrain that could have the most transformative impact.”

Democrats aren’t in a strong position, according to the group.

“[GOP strategist] Karl Rove recently opined about the Democratic fundraising juggernaut, and Republicans being asleep at the wheel for redistricting. But make no mistake: anyone who suggests Democrats have an advantage for 2020 and the subsequent redistricting is either intentionally misdirecting or blindly misunderstanding the current state of play.”

Forward Majority’s approach “can be very successful if they target their spending right,” Donny Ferguson told The Epoch Times. Ferguson, who was previously communications director for then-U.S. Rep. Steve Stockman (R-Texas), is president of Americans for a Better Economy, an Alexandria, Virginia-based nonprofit organization.

“In Texas, they need to flip only nine seats to capture the House, and there were around 20 races in 2018 where they came within 5 percent. Winning a majority in just one chamber could be enough to force a compromise plan, giving them more seats, or throw the entire process into the courts, where anything can happen,” Ferguson said.

“Winning a state legislative seat can be done fairly cheaply. They already have $10 million and only 50 targets. Other than the presidential race, 2020 will be a good year for Democrats. If they put $200,000 per race into door-knocking, phone calls, and targeted mailings, they have the ability to push competitive Democrats over the top.”

The four-year-old political action committee, Forward Majority, on Jan. 3 unveiled “Roadmap 2020,” which takes aim at marginal seats that Democrats almost won in 2018 in the four states that, like all states, will redistrict their congressional maps after the 2020 Census results are disseminated.

The PAC’s website declares: “For years, conservative extremists have used state legislatures to gerrymander Congress and attack Americans’ right to vote. Forward Majority has an aggressive strategy and proven model to stop them before it’s too late.”

President Donald Trump won all four targeted states in his race against Democratic candidate Hillary Clinton in 2016, winning 49 percent of the popular vote in Florida, 52.2 percent in Texas, 48.1 percent in Arizona, and 49.8 percent in North Carolina. Out of the 270 electoral votes required to win the presidency, Texas has 38, followed by Florida with 29, North Carolina with 15, and Arizona with 11 votes.

“There are four states that represent the most powerful points of leverage to fortify our democracy,” said Vicky Hausman, Forward Majority co-founder. “Quite simply: these states are where Democrats face the greatest risk of being locked out of power nationally for the next 10 years.”