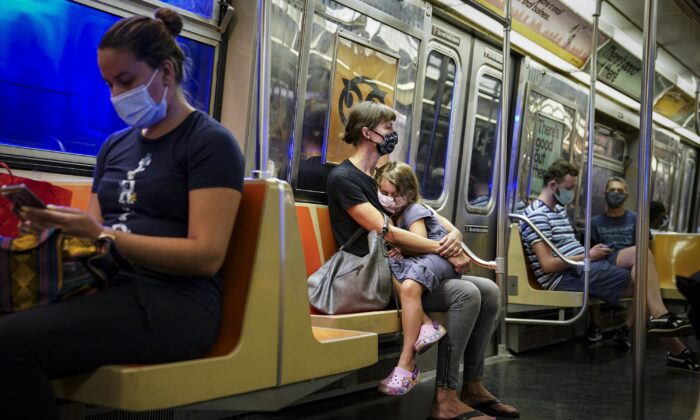 Several Democratic-led cities, including New York, Boston, Philadelphia, and San Francisco, are requiring passengers to wear masks despite a federal judge’s order on April 18 that struck down a Centers for Disease Control and Prevention (CDC) mask rule for travel.

While travelers won’t have to wear masks inside Logan Airport in Boston, the city’s Massachusetts Bay Transportation Authority has announced that it will continue to follow CDC guidance and require masks in indoor transportation areas.

The authority “is continuing to follow CDC guidelines and will review the court order. We are also reaching out to our federal partners to get further guidance,” the authority wrote on Twitter.

In San Francisco, masks are still required to be worn on Muni trains and on Bay Area Rapid Transit (BART) trains, BART wrote in an April 20 Twitter post. Officials also told local media outlets that masks are no longer mandated for the Oakland, San Jose, and San Francisco airports.

“Face masks are still required at BART while we review our options,” BART’s San Francisco office wrote in a Twitter post. “We are seeking clarity from the state if there is a state-level mask mandate for transit that we can use to continue requiring and enforcing a mask mandate.”

The transit agency also stated that it isn’t clear whether the mask mandate will ultimately be rescinded.

“We haven’t made an official determination if a mask mandate will continue on BART,” another BART Twitter post reads. “Once we make a final determination, we will communicate it. We don’t want to say one thing and then immediately change it with little notice. We’ve been consistent [with] this since the ruling.”

Philadelphia stated this week that it would keep its indoor mask mandate, including for public transportation, intact despite the Florida judge’s ruling on April 18. The city reinstated its mask mandate on April 18, becoming the first major U.S. municipality to do so, and officials said a small rise in COVID-19 cases warranted the shift in policy.

“We are evaluating the implications of this latest ruling and will provide further clarity around masking on transit in Philadelphia when available. This ruling does not impact the city’s mask mandate for certain indoor places.” James Garrow, a spokesman for the Philadelphia Department of Public Health, told media outlets on April 20.

While New Jersey Transit, which operates some trains that go to and from New York, stated that it won’t enforce the mask mandate, officials in New York said subway and bus riders will still be mandated to wear face coverings.

On April 18, U.S. District Judge Kathryn Kimball Mizelle issued an order stating that the CDC’s mandate was unlawful and violated federal administrative law. The CDC told The Epoch Times that it’s still reviewing her order and will make a decision on whether to determine whether the mask rule—issued in early 2021—is still needed.