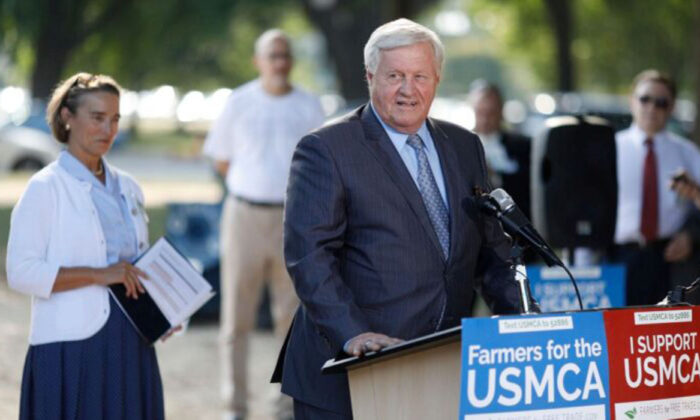 Chairman of the House Agriculture Committee Rep. Collin Peterson (D-Minn.) delivers remarks during a rally for the passage of the USMCA trade agreement in Washington on Sept. 12, 2019. (Photo by Tom Brenner/Getty Images)
Trump Presidency

A longtime Democratic congressman whose district overwhelmingly voted in favor of President Donald Trump confirmed that he’ll vote against articles of impeachment.

Rep. Collin Peterson (D-Minn.), the chairman of the House Agriculture Committee, told The Globe on Dec. 14 that unless he hears something that changes his mind this week, he won’t vote in favor of impeaching the president, joining Rep. Jeff Van Drew (D-N.J.), who also indicated he won’t vote for impeachment.

Peterson and Van Drew, who both represent districts carried by Trump in 2016, joined Republicans to vote against an impeachment inquiry resolution in late October.

Peterson said he expects between four and five other Democrats to vote against impeachment.

Peterson told the publication that “unless they come up with something between now and Wednesday,” he won’t support the House Democrat-led push. “Maybe something will change. I doubt it,” he said.

Trump “has not committed a crime,” and the case against the president includes only “secondhand” information about Trump’s phone call with Ukrainian President Volodymyr Zelensky, Peterson said. He appeared to reference an anonymous complaint by a member of the intelligence community about the July 25 call, alleging that Trump pressured Zelensky into investigating former Vice President Joe Biden and son Hunter Biden in exchange for military aid, which Trump and Zelensky have both denied.

“They’ve spent a year trying to figure out how they can make a case for [impeachment]. That’s backward. I just don’t agree with this,” Peterson said.

The longtime Democrat, who was first elected in 1991, questioned the strategy of the House Democratic caucus, since impeachment is most likely going to fail in the Senate.

“This is dividing the country for no good reason, because he’s not going to be thrown out of office,” Peterson said. “Why are we doing this?”

“If people don’t like Trump, they can vote against him,” he told The Globe.

Peterson noted in the interview that voters in his district oppose the United States providing foreign aid to other countries.

Last week, the House Judiciary Committee voted to advance two articles of impeachment against the president: obstruction of Congress and abuse of power. The House reportedly is to vote on the articles on Dec. 18.

Over the weekend, reports said Van Drew met with Trump and is considering switching parties to Republican from Democrat. In response, Trump wrote on Twitter that it “would be big,” while Democratic Gov. Phil Murphy condemned the possible switch as “the final straw” and said this has “made it impossible for him to continue being supported by our party.”