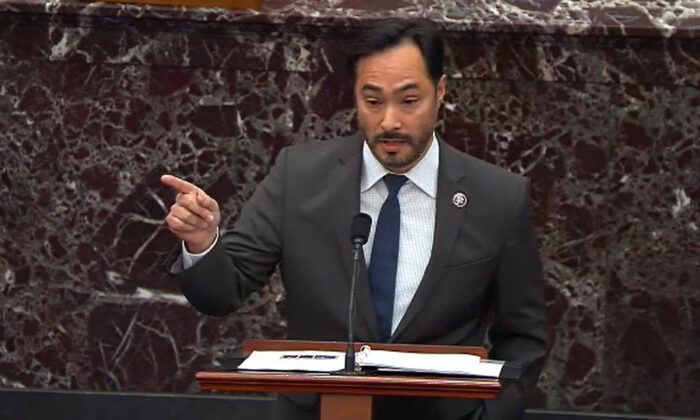 In this screenshot taken from a Congress.gov webcast, Impeachment Manager Rep. Joaquin Castro (D-Texas) speaks on the second day of former President Donald Trump's second impeachment trial at the Capitol in Washington on Feb. 10, 2021. (Congress.gov via Getty Images)
Democrats

Rep. Joaquin Castro (D-Texas) is requesting an FBI investigation into police conduct during and after the shooting in Uvalde, Texas, that left 19 children and two adults dead.

Castro, whose San Antonio district lies around 80 miles from Uvalde, made the request for “a complete and comprehensive account of how this tragedy occurred” in a May 26 letter to FBI Director Christopher Wray (pdf).

“Today our nation and the state of Texas mourn the 19 children and two teachers murdered at Robb Elementary School in Uvalde, Texas on May 24, 2022,” Castro wrote. “The Uvalde shooting is the deadliest school shooting in Texas and one of the deadliest to take place in the United States.

“This incident has devastated Uvalde and the surrounding community, which includes my city of San Antonio. San Antonio hospitals received patients who were critically injured in the shooting and our school counselors, law enforcement officers, health care workers, and other personnel are in Uvalde to help our neighbors respond to this horrifying tragedy.”

He continued: “The people of Uvalde, of Texas, and of the nation deserve an accurate account of what transpired. However, state officials have provided conflicting accounts that are at odds with those provided by witnesses, including: Whether the school security officer and the gunman exchanged fire outside the school [and] How long law enforcement officers were in adjoining classrooms while the gunman barricaded himself in a classroom with students and teachers.

“Onlookers allege that parents unsuccessfully urged law enforcement to enter the building during this time and confront the shooter.

“I urge the FBI to use its maximum authority to thoroughly examine the timeline of events and the law enforcement response and to produce a full, timely, and transparent report on your findings. Your agency must ensure that the American people have a complete and comprehensive account of how this tragedy occurred.”

Uvalde police and armed school security have been excoriated on social media for their alleged inaction during the shooting.

According to multiple accounts, law enforcement and security officers stood outside the school for nearly an hour while the shooter barricaded himself in a room with teachers and students. Though parents pleaded with them to enter the school, police remained outside, allegedly arresting and restraining parents who tried to enter themselves.

According to an AP report, Javier Cazares, the parent of a fourth-grade girl who was killed in the attack, said, “Let’s just rush in because the cops aren’t doing anything like they are supposed to.”

“More could have been done,” Cazares added. “They were unprepared.”

A video circulated around Twitter from the shooting seems to show police officers actively restraining parents as they tried to enter the school, with tasers at the ready to prevent any parent trying to enter the building from doing so.

As one parent was restrained by police, others in the crowd were heard shouting, “What the [expletive] are you doing to him, let him up!”

One mother, Angeli Rose Gomez, said she drove 40 miles when she heard about the shooting. After she arrived, she found that “the police were doing nothing,” Gomez told the Wall Street Journal.

After pleading with the officers to take action, Gomez was placed in handcuffs by U.S. marshals for “intervening in an active investigation.”

Other reports allege that, at the same time that they were preventing other parents from entering the school, several police officers entered and pulled out their own children.

During a press conference, Victor Escalon, a regional director for the Texas Department of Public Safety, admitted that police, despite being on the scene, took minutes to finally follow the shooter into the building.

According to Escalon, the gunman initially opened fire at the building from the parking lot after climbing over a fence before entering the school at 11:40 a.m. and firing “numerous rounds.”

“Four minutes later, local police departments … are inside, making entry,” Escalon admitted. “They hear gunfire. They take rounds. They move back, get cover and during that time they approach where the suspect is at.”

Upon taking fire from the classroom where the shooter barricaded himself, police officers on the scene reportedly retreated and began to evacuate the school while calling for backup.

Later grilled for why police officers did not act more boldly to take down the shooter, one Uvalde police lieutenant defended his colleagues, saying during an appearance on CNN: “They could’ve been shot. They could’ve been killed.”

In a statement, FBI Director Christopher Wray announced that the FBI is already working with Texas authorities to investigate the shooting.

“The FBI will continue to work around the clock with the Texas Department of Public Safety; the Uvalde Police Department; and our other state, local, and federal partners to assist in any way we can,” Wray wrote. “We’re dedicating the full resources of the FBI San Antonio Field Office and a host of other FBI Divisions to helping the Texas DPS and Uvalde PD, which have the lead in the investigation.”

In an email to the Epoch Times, the FBI confirmed receipt of Castro’s letter but said, “We have no additional comment.”

Oliver Rich, FBI special agent in charge at the San Antonio division at the May 27 briefing, suggested the possibility of an investigation into the actions of Uvalde police, but struck a non-committal tone.

“If the facts bear out that there is a federal nexus, then the FBI will conduct an appropriate investigation at that time,” Rich said. “But for now, we continue in this to support the Texas Rangers.”