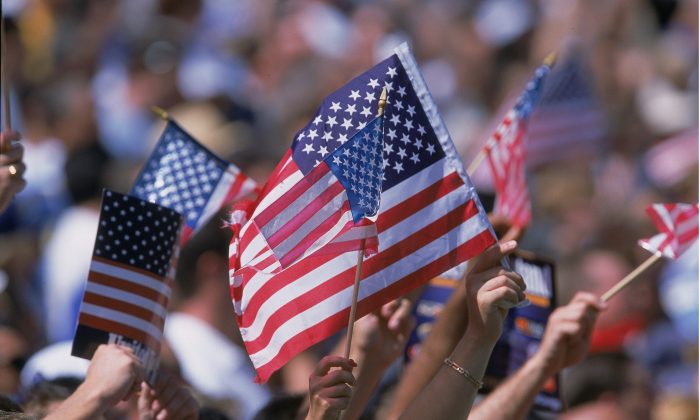 American Flags are waved by the crowd at the Rose Bowl in Pasadena, California, on Sept. 22, 2001. (Stephen Dunn/Allsport)
US News

A Republican candidate for governor said that a Connecticut lawmaker who was seen taking a knee during the Pledge of Allegiance during a meeting should resign.

Melissa Schlag, a Democratic selectwoman from Haddam, Connecticut, took a knee during a Board of Selectmen meeting on July 16, which was caught on video.

She was apparently protesting President Donald Trump’s comments during his summit with Russian Vladimir Putin in Helsinki.

.⁦@FOX61News⁩ viewer posted this pic of #Haddam Selectman Melissa Schlag kneeling and looking away from the American flag during the Pledge of Allegiance to start a recent BOS meeting. Your thoughts? pic.twitter.com/hn2O9XBKEZ

“I felt nervous when I did it but I also felt powerful,” Schlag told the Hartford Courant. “If I don’t speak up, those who can’t won’t be heard.”

But she was resoundingly criticized for the move. On social media, some said that she was being disrespectful to the United States and the flag.

Melissa Schlag must resign immediately! It should be the basic responsiblity of any public official to respect the Flag. Haddam and Connecticut deserve better leadership! #DontSchlagTheFlag #ctgop #ctgov #ctpolitics pic.twitter.com/wbpIYzZcYN

Republican Tim Herbst, the former mayor of Trumbull who is running for governor of Connecticut, tweeted that she “must resign immediately! It should be the basic responsibility of any public official to respect the Flag. Haddam and Connecticut deserve better leadership!” He added the hashtag #DontSchlagTheFlag.

Meanwhile, in an interview, he described Schlag’s protest as “appalling,” Fox reported.

He added: “One of the things the flag stands for—it stands for our freedom, it stands for our democracy. It stands for the fundamental ideal that we can have differences of opinion, but we all stand in respect of our flag because many people, including my 93-year-old grandfather who’s a veteran, fought in defense of the very liberty that the flag resembles.”

He said the kneeling is a sign that Democrats have a “complete lack of respect” for the country and flag.

Fox reported that from 2013 to 2015, Schlag, who supported Senator Bernie Sanders during his 2016 presidential bid, had both the United States and Connecticut flags removed from her office.

The Pledge of Allegiance was first introduced in 1892 by the socialist minister Francis Bellamy. However, the lyrics were altered in 1923, and the words, “the Flag of the United States of America” were added.

During the threat posed by the Soviet Union and other communist states in the 1950s, President Eisenhower encouraged the words “under God” to be added, and its included in the pledge that what Americans use today, according to USHistory.org.

The Pledge of Allegiance is included in Section 4 of the U.S. Flag Code.